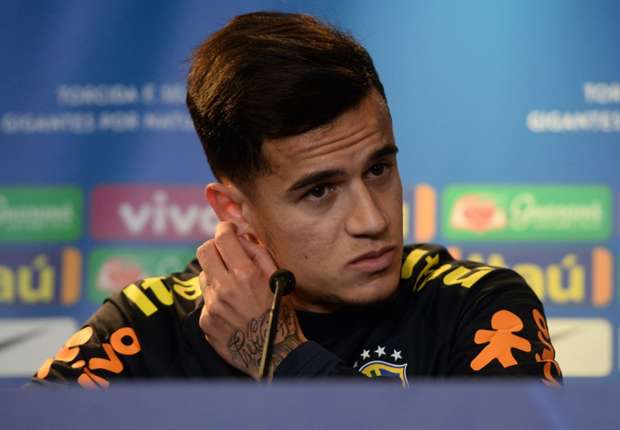 Philippe Coutinho has confirmed he is 100% fit to face England when the Chevrolet Brasil Global Tour rolls into London this week.

The Liverpool midfielder was forced to sit out of Brazil’s 3-1 victory over Japan in Lille on Friday with a muscle injury.

“Unfortunately, I couldn’t play for Liverpool in the last few games because of injury,” Coutinho said at a press conference on Sunday.

“Now I feel 100%. I have fully recovered and I am in a good shape to be available for the match with England.”

Just when you thought you couldn’t love Tite any more… pic.twitter.com/nAxhIqN7xc

At Sunday’s training session it was unclear whether Coutinho could come back into the side in his usual role on the right or deeper in central midfield, where coach Tite had planned to use him against Japan.

But either way, he is expected to return to what should be a full-strength side for the second and final leg of this month’s Brasil Global Tour.

And Coutinho believes England, buoyed by an exciting though goalless draw with Germany on Friday, will provide a stiff test despite a number of injury problems of their own.

When the boss has your back!

“England will be our first European opponent under Tite. We are looking forward to competing against them,” he said.

“They have a lot of quality players who play in the Premier League, an important competition. It will certainly be a difficult match.

“The are not weakened by having young players in the side. Those who come in and get chance to play will be desperate to do their best to take the opportunity.”

He continued: “It’s a very important game for all of us. To play in England, near my family, in a big stadium, we certainly expect a good game and a great spectacle.”