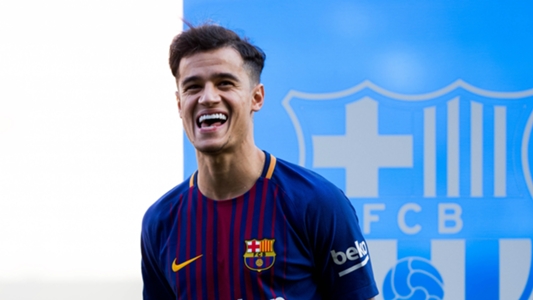 Philippe Coutinho and Ousmane Dembele will have to adapt to Barcelona’s existing tactics as head coach Ernesto Valverde is not planning radical changes to accommodate the duo.

While Dembele is available having recovered from three months out with a hamstring injury, Coutinho, who joined from Liverpool last week, faces a short wait for his Barca debut due to a minor thigh problem.

Barcelona’s strong form – they are yet to lose in any competition since their Supercopa de Espana loss to Real Madrid in August – has posed questions about how Coutinho and Dembele will be integrated.

Valverde has at times employed a 4-4-2 with a flat four in midfield behind Lionel Messi and Luis Suarez this season, with Dembele and Coutinho both seemingly more suited to a 4-3-3.

And the Barca coach gave few clues as to how he sees Coutinho and Dembele fitting in when he spoke to the media on Wednesday ahead of the second leg of his side’s last-16 Copa del Rey tie with Celta Vigo.

“Coutinho can’t play yet, Dembele can play on both sides, but regardless of small changes things are going to be very similar,” Valverde told reporters.

“Coutinho is a player we think can help us. Each player is different and brings something new. He scores, he can shoot. He can play inside or outside and we hope he can contribute and help us to be better.

“It’s a coach’s job to speak about his team. We’re competitive, in three competitions, at the greatest club in the world. We’re always trying to win and make our fans happy. We think our players are the best, that’s the way it is.”

Valverde: “We hope that @Phil_Coutinho can help us a lot, he’s a great signing. A player who can feature in a variety of positions and can adapt well the team’s style”  #ForçaBarçapic.twitter.com/tuOPKwU1S6
— FC Barcelona (@FCBarcelona) January 10, 2018

Barca were held 1-1 at Balaidos in the first leg of the tie a week ago, while Celta drew 2-2 at Camp Nou in LaLiga earlier in the season

And Valverde is expecting another tricky encounter from Juan Carlos Unzue’s side as the ex-Barca goalkeeper and Luis Enrique’s former assistant returns to Camp Nou with Celta on Thursday.

“I haven’t won it [the Copa del Rey] and from an individual standpoint I want to win the Copa del Rey, although the players have,” said Valverde, who would not confirm reports Barca are preparing for the imminent departures of Javier Mascherano and Arda Turan.

“I played a final against Barcelona and lost. Tomorrow we want to go out and win the game. It’s a title we are playing for and we are playing in the Copa del Rey against Celta and it’s extremely important.”

On the threat of Celta forward Iago Aspas, Valverde added: “He is an extraordinary player, he doesn’t just score against us, he scores against everybody.

“He has the facility to play in space, can play inside or on the wing. He’s a strong character and I like him a lot as a player. He’s in good form right now.”