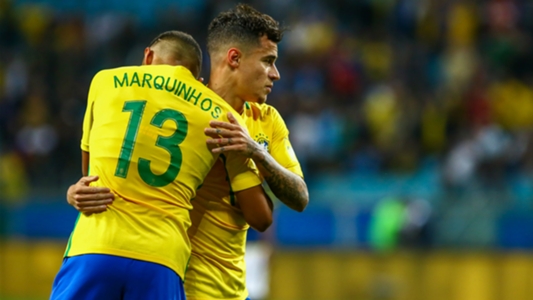 Liverpool and Brazil star Philippe Coutinho insists he is “100 per cent fit” following his recent thigh injury and is set to feature against England at Wembley on Tuesday.

Coutinho last featured for club or country on October 22 in Liverpool’s 4-1 defeat to Tottenham in the Premier League, with the muscle problem forcing him to miss their following three matches.

He was called up to Brazil’s squad despite the injury and sat out of their friendly with Japan on Friday, but the 25-year-old’s recovery has since gone to plan.

And now he is raring to go, with the match against England giving him the perfect opportunity to build up a bit of match fitness ahead of returning to action with Liverpool.

“Unfortunately, I could not play for Liverpool in the past three games because of injury,” Coutinho told reporters.

“Now I feel 100% fit, I have recovered and I am in a good shape to be available for the game against England.

“I never want to miss any Brazil games. I am honoured to wear this shirt whenever I can.

“England will be our first European opponent under Tite [Brazil coach]. We are looking forward to battling with them

“They have a lot of quality players who operate in a top league like the Premier League. It will no doubt be a difficult encounter.”