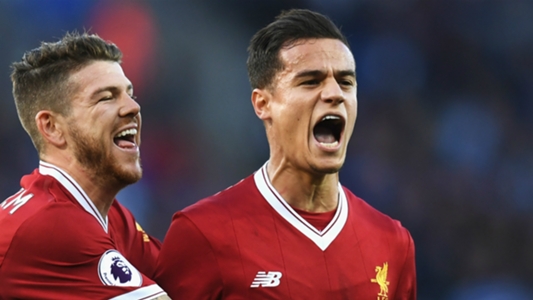 The Brazil international was the subject of three bids from the Spanish giants before the transfer deadline, but the Reds held firm to ensure the 25-year-old remained at Anfield until at least January.

Speculation is still rife that Barcelona will make another attempt to sign the attacking midfielder and Moreno says he has done everything he can to convince his friend to stay on Merseyside.

He told The Guardian: “I’ve said: ‘Brother, don’t go.’ If I get to decide, Philippe’s not going.

“He’s my friend and always will be. I don’t know what will happen. If it was down to me, I’d love him close to me for life, always enjoying seeing him play football, which is a wonder.

“But I can’t interfere. It’s Liverpool, Barcelona and him, and they decide. He’s a big piece at Liverpool. Every fan, everyone who watches Liverpool, everyone who understands football knows that. They know that if he goes, it will leave a big hole.

“I’ve become stronger here in every way – but I’m not finished yet.” @Phil_Coutinho on his development at #LFC: https://t.co/bXpfF75kTmpic.twitter.com/GmQiVfqJaE
— Liverpool FC (@LFC) November 16, 2017

“It’s a privilege, it’s an honour to share a dressing room with him. I see him train every day and he does things I’ve never seen before.”

Coutinho looks set to return to Jurgen Klopp’s starting line-up for Saturday’s home clash against Southampton after missing the past three games with a groin injury.