With the Brazilian’s future seemingly hanging in the balance, could such a move see the future of Philippe Coutinho at Liverpool thrown into doubt?

While Premier League clubs have been splashing the cash already this summer, there is a move that could eclipse the transfer fees paid for Romelu Lukaku, Alvaro Morata and Kyle Walker.

Neymar’s future at Barcelona has been thrown into serious doubt amid a potential record-breaking bid of €222 million from Paris Saint-Germain, triggering the 25-year-old’s release clause at the Camp Nou.

While the Catalan giants would obviously be loathed to lose one of their stars, especially to a side that they could easily come up against in the Champions League, it could have a knock on effect for a Premier League star.

A world record fee such as this one would surely mean the Barcelona hierarchy are more likely to go after a high profile acquisition to boost their chances of overhauling Real Madrid’s dominance in domestic competition and Europe.

One of the men in the transfer crosshairs of Ernesto Valverde’s side is Liverpool’s Philippe Coutinho. While Jurgen Klopp insists that the Reds “are not a selling club”, the Luis Suarez transfer proved it is extremely difficult to resist Barca’s financial muscle and overall appeal.

dabblebet have got a Goal special available to all customers which offers 7/4 (2.75) that Neymar, Coutinho and Kylian Mbappe all leave their current clubs before the end of the summer transfer window. They can move to any other side, but all three must be registered with new teams by the end of the month.

Mbappe is subject to plenty of interest from around Europe but Real Madrid certainly look to be in pole position after a summer of sales to boost the transfer kitty. 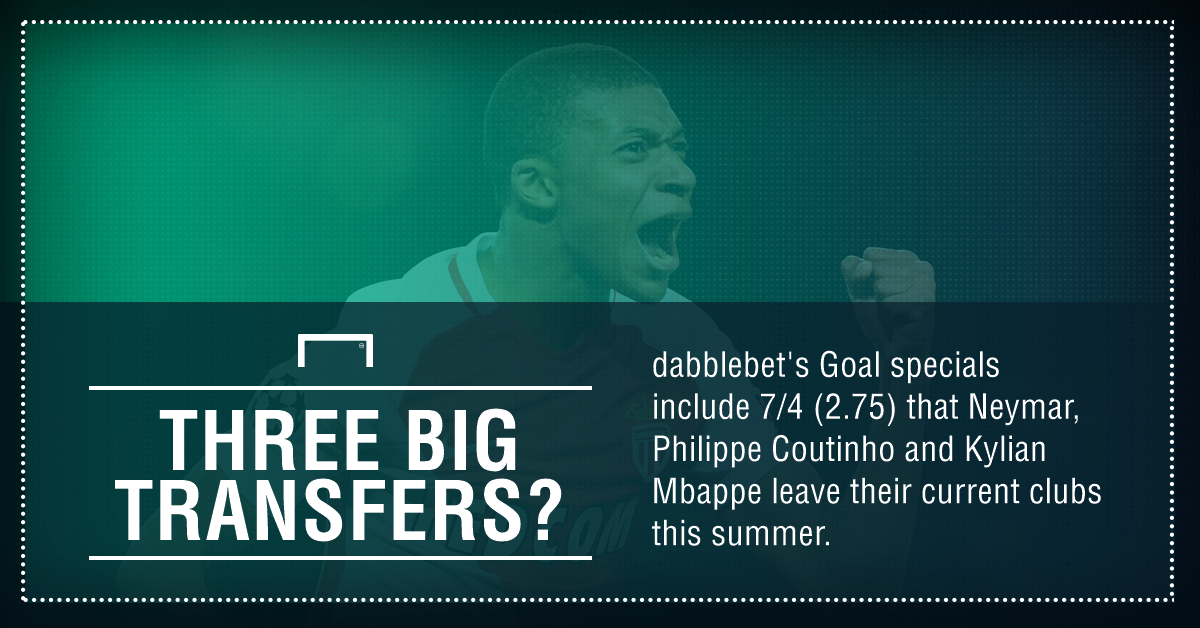 Los Blancos netted an initial £86m from the sales of both Morata and Danilo to Chelsea and Manchester City respectively and have seemingly turned their attentions to Monaco’s 18-year-old starlet to bolster their attacking options.

While the start of the new European season is just around the corner, it looks like several top clubs could be conducting plenty of transfer business throughout August as the transfer deadline approaches.