?Barcelona secured their second consecutive La Liga title with three games to spare on Saturday evening as Lionel Messi scored the only goal in a 1-0 win over Levante.

It was the culmination of a truly dominant domestic campaign for La Blaugrana, where they have widened the gap between themselves and the rest of the chasing pack in Spain, and, unsurprisingly, it was spearheaded by the indescribably absurd talent that is Lionel Messi. 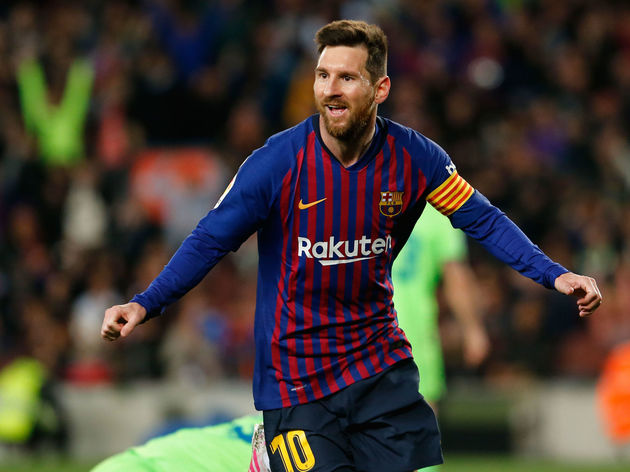 It was fitting that it was to be ?Messi who secured the title as, at times this season, he’s cut a positively isolated figure, whose insatiable desire to win has been at the centre of ?Barcelona’s repeated success.

Messi’s natural talent has been eulogised a million times over in the past, but this season has seen the Argentinean take on increased accountability for his side’s fortunes after the departure of former club captain Andres Iniesta last summer.

The diminutive Argentinean is set to to finish the season as the top scorer in ?La Liga with a scarcely-believable 34 goals to his name and he’s also in line to top the assist charts after setting up 15 goals for his teammates.

The confirmation of the league title means that he has now won ten separate La Liga trophies, making him the most decorated player in Barcelona’s long and illustrious history in the competition, overtaking nine-time winner Iniesta.

While Messi has been undoubtedly superb, it would be disrespectful to suggest that the rest of Barcelona’s squad have been slacking this season.

The wave of summer signings that joined the club last season have slotted into the Barca squad seamlessly and have increased the strength in depth in depth to no end. In turn, Ernesto Valerde has been able to constantly tinker with his starting XI to effectively compete in all competitions without ever compromising their surge to the league title.

And that’s also not forgetting the man between the sticks behind him. Marc-Andre ter Stegen may not have the best defensive record in the league, but he has certainly enjoyed his best season since joining the club in 2014.

He’s come up big on a number of occasions, making crucial saves at vital moments to ensure that Barca came away with victories when they otherwise may have dropped needless points. His performances have been so impressive that a case could even be made to suggest that he is now the world’s most complete goalkeeper.

La Liga champions 2018/19 ! ???
A huge job by all of us throughout the season, and it’s amazing to celebrate the victory at our Camp Nou with our fans. One objective complete, 2 more to go! More to come…@FCBarcelona pic.twitter.com/G8BAEol6sC

But, as has been proven countless times in the past, talent can only get you so far. Grit, determination and the desire to upset the odds are always essential for a title-winning squad.

So far this season Barcelona have earned 21 points from losing positions, the highest total in the league, haven’t been defeated by any of their rivals at the sharp end of the table and have maintained their dominance over Real Madrid – highlighted by their 5-1 win over their bitter rivals in October.

The ??beat of a Barça fan after winning @LaLiga …

The ??beat when they see there are 2 more titles to play for…

They are set to face off against Valencia in the final of the Copa del Rey at the end of May, while they have the tricky task of overcoming high-flying Liverpool in the semi finals of the Champions League.

They’ll no doubt be confident of finishing the season with two more trophies under their belt and, if their league form is anything to go by, then they should have no troubles doing so.