earlierunrest, and the fixture was eventually rescheduled for December. The importance of the match has only grown with each passing week as the two clubs jostle for the top spot in the La Liga table going into Wednesday’s massive derby, and it has become possibly the key match of the entire campaign.

Here’s a look at one of the biggest matches in the footballing calendar for your midweek pleasure.

?Barcelona may still be without long-term absentee ?Ousmane Dembélé, while Jordi Alba should be fit and firing following his return from injury against Real Sociedad at the weekend. Full-back Nelson Semedo also made his return as a substitute in the 2-2 draw on Saturday afternoon, and he could be in contention to reclaim a place in Ernesto Valverde’s starting XI.

?Real Madrid will be without star forward ?Eden Hazard, as the Belgian’s injury woes continue. The ex-Chelsea man suffered a hairline crack to his foot against Espanyol, and he will be sorely missed by Zinedine Zidane’s side. Ferland Mendy will return from suspension for the big derby, and ?Gareth Bale may be in contention to make a rare start for Los Merengues, along with Vinicius Junior.

There are always fireworks when these two sides meet, and Wednesday evening will be no exception. The signs are ominous for Madrid however, as they have failed to beat Barcelona in each of their last six meetings. 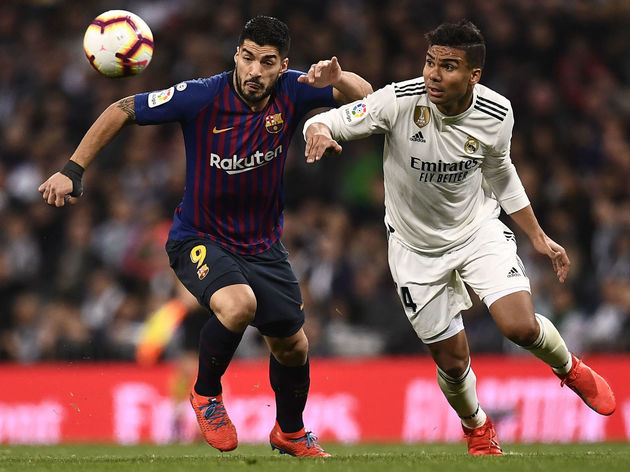 La Blaugrana have the psychological edge going into the match, and last season’s 4-0 aggregate victory will be fresh in the minds of Zidane’s stars. Valverde’s men also delivered a crushing 5-1 victory over Madrid in 2018, when ?Suarez ran rampage and bagged a wonderful hat-trick for the hosts.

Madrid’s last victory over their arch rivals came at the beginning of the 2017/18 campaign, when Marco Asensio and ?Karim Benzema bagged in a 2-0 win, completing a 5-1 aggregate hammering of Barca in the Spanish Super Cup final.

?
?After making shaky starts to the season, both teams seem to have found their groove in recent weeks, and the results are testament to their drastic improvement. Question marks still remain over both teams and their managers, but the pressure seems to have eased on the futures of Valverde and Zidane.

That could all change after Wednesday evening though – at least for one of them. Barcelona and Madrid have both won four of their last five matches, drawing one – although Barcelona’s draw came in the form of a setback against Real Sociedad on Saturday afternoon.

Los Merengues are beginning to look stronger at the back, but they remain susceptible against the better attacking sides.

Both sides will be desperate to claim the three points on Wednesday night, as there really is so much to play for at the top of the table. Barcelona will go into the game as favourites however, and given the recent form of Messi and Antoine Griezmann, it is hard to question those odds. Madrid will be hurting given their poor record against Barca, but ultimately Zidane’s side are just not on the same level as the magic ?Messi, and that could prove to be the difference.

We expect plenty of goals from both sides, as the rivals have looked far from secure at the back this season, but Barcelona should come out on top with a little help from their superstar saviour.