Barcelona will be looking to bounce back from their opening day defeat in La Liga, as they host Real Betis on Sunday night.

Barcelona began their title defence in the worst way possible, as they lost 1-0 to Athletic Club last Friday. After a dogged performance, the Blaugrana conceded an 89th minute winner, as an Aritz Aduriz stunner sent them back to Catalonia pointless.

Real Betis also opened their campaign with a late defeat, with Real Valladolid securing a 2-1 win last Sunday. Oscar Plano’s 89th minute strike gave the visitors all three points, as Betis look to recover from their home defeat at the home of the reigning champions.

?Barcelona are set to be blessed with the return of star man ?Lionel Messi, who is ?in contention to play on Sunday. The Argentine missed the start of the season with a calf injury, but could feature this weekend after returning to training on Wednesday for the first time in weeks.

While Messi’s return is hugely positive for Barca, Ernesto Valverde still has other injury concerns. ?Luis Suarez is out with a calf injury he picked up in the season opener, ?Ousmane Dembele is sidelined for five weeks with a hamstring injury and Neto is out with a hand injury.

Real Betis travel to Catalonia with one key absentee, with new signing Borja Iglesias missing out with a sprained ankle. Betis are also without goalkeeper Joel Robles, who is serving a one-match suspension after being sent off eight minutes into their league opener last week.

?Barcelona and Real Betis have met 46 times, with the Blaugrana winning over half of the meetings – with 28 wins to their name. Meanwhile the Verdiblancos have managed just nine wins, as they hope to make it double digits at the Camp Nou on Sunday.

Last season’s meetings proved to be thrillers, with 12 goals over two games. After Betis won 4-3 at the Camp Nou, Barcelona got their revenge in a 4-1 win four months later, thanks to a Messi hat-trick. This included a sensational chip to complete his treble, which was recently nominated for the 2019 Puskas Award.

Barca have scored at least four goals in six of their last 12 meetings with Betis, losing just one of their last 16 encounters. Last November’s dramatic 4-3 win was the first time Betis managed to score four goals at the Camp Nou, and their first league win there since May 1998. 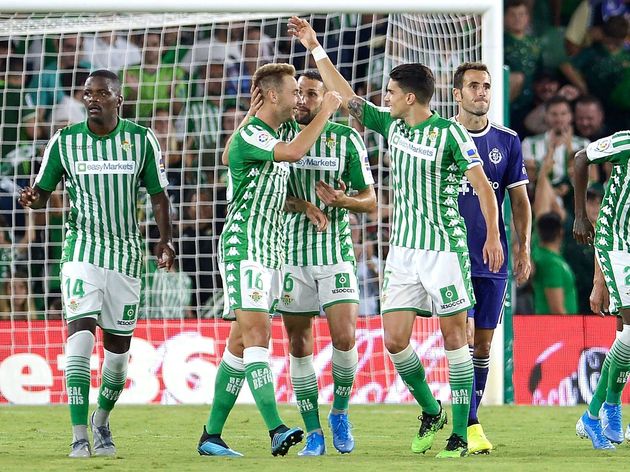 Both sides will be vying for victory more than ever, after both losing their opening day fixture. Barcelona need to instantly recover if they want to retain their La Liga title, with their ?1-0 defeat at Athletic Club seeing the Blaugrana lose for the first time in five games.

Just one place above Sunday’s opponents, Real Betis fell to their second consecutive defeat after losing 2-1 to Real Valladolid. The Verdiblancos have a huge task ahead as they aim to come away with a win from the Camp Nou, but it is not impossible as proven last season.

Here’s how each team has performed in their last five fixtures. ?While both sides are in the same situation, the pressure is undoubtedly mounted on Barcelona. An underwhelming performance like the one in Bilbao cannot be repeated, and against an equally motivated Betis side they cannot falter in their first home game of the season.

Barca’s performance last week gives little confidence going into Sunday, but the return of Messi will certainly be a crucial factor. Barcelona should return to winning ways and secure a much needed three points, as they continue their defence of the coveted La Liga crown.