Ernesto Valverde’s Barcelona host Alavés on Saturday afternoon as La Blaugrana look to finish the year at the top of La Liga ahead of rivals Real Madrid.

Barcelona fired a blank against Los Blancos on Wednesday night to record their second consecutive draw, having stumbled to a 2-2 tie with Real Sociedad on Saturday. The league leaders have amassed 36 points from their opening 17 games despite losing on three occasions already.

Meanwhile, Asier Garitano’s Alavés remain in mid-table obscurity, having picked up 19 points in 17 games, leaving them 14th. The visitors recorded a 1-1 draw in their last outing against Leganés and are without a win since a 2-0 away victory over Eibar in November. With victory a necessity for Barcelona and perhaps more of a luxury for Alavés, Saturday’s fixture may seem a one-sided affair on paper. However, football can be full of surprises and another upset could be on the cards, especially with Barcelona faltering in recent weeks.

Sergio Busquets was peculiarly omitted from Valverde’s squad to face Real Madrid after initially being poised to start, with his manager claiming illness was the reason for his exclusion. Ousmane Dembélé (thigh) and Arthur (adductor) remain sidelined.

Saturday could well see the return of Busquets in the place of Ivan Rakiti?, while Nelson Semedo may also be replaced by Sergi Roberto at right back.? Alavés find themselves with only a few injuries ahead of their trip to Camp Nou. Tomas Pina remains out with a fractured leg, but Joselu and Lucas Pérez could return to the starting XI.

Oliver Burke will look to keep his place after starting against Leganes last time out, although Luis Rioja is another viable option in the wide area.

Barcelona and Alavés have faced each other eight times in ?La Liga previously, with Barça recording six victories to El Glorioso’s one win and one draw. 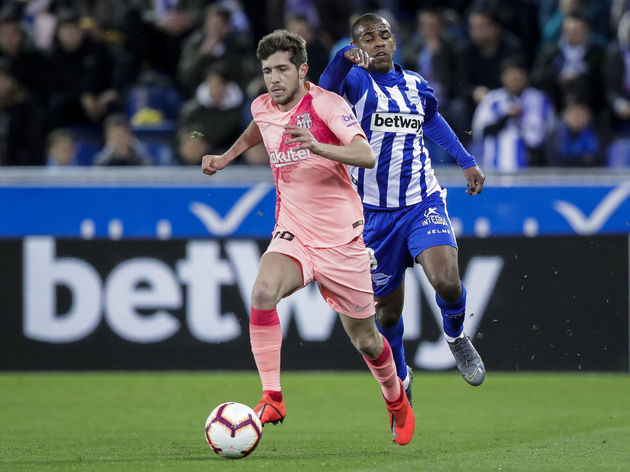 ?Barcelona have not lost to Alavés since 2016 and have won all of the last six encounters between the two clubs. Most recently, Barcelona emerged 2-0 victors at the Mendizorrotza back in April.

Barcelona are currently in a slight dip in form compared to their usual imperiousness, drawing their last two on the bounce. La Blaugrana have, however, won four of their last six games, including victories against ?Inter, ?Atlético Madrid and ?Borussia Dortmund.

Prior to their 0-0 draw against Real Madrid, Barcelona were on a seven home-game winning streak since the start of the 2019/20 season, having beaten teams such as Sevilla, Valencia, Villarreal and Real Betis. Garitano’s side are five points off the relegation zone and are in need of some shift in momentum if they are to survive in Spain’s top flight for a fifth consecutive season.

Alavés enjoyed wins either side of the November international break over Real Valladolid and Eibar, but the Basque side have gained just a single point from their last three matches against Real Madrid, Leganés and Granada.

With that said, here is how both sides have fared in their previous five fixtures. Alavés know what it takes to beat Barcelona in their own back yard, having emerged victories by two goals to one in 2016. However, anything other than a home win is extremely unlikely given the circumstances.

The visitors will certainly put up a fight, and, with over 4.3 goals scored on average in Barcelona’s home games this season, both teams may well get on the scoresheet.

The magic of Messi will be enough to see off Alavés even if his Barça teammates are not on song and La Blaugrana should be able to pick up all three points against their opponents on Saturday afternoon.