Given that there are only three senior centre-backs currently at Camp Nou, it would be very strange if Barcelona didn’t sign a new one this summer.

Gerard Piqué has become a legend for La Blaugrana and may well play for several more years. However, at 33, his best is probably behind him.

And with rumours suggesting Samuel Umtiti will likely depart at the end of the season, it becomes more crucial that the club find a replacement quickly, as a long-term successor to Pique and partner for Clement Lenglet.

With a pressing need to find someone who can anchor the backline, here’s a look at seven centre-backs Barça could and should realistically target when the transfer window does open… One of the finest centre-backs in the world, Koulibaly could be a transformative signing for the Catalans.

And with teams often counter-pressing against La Blaugrana’s possession style, the 28-year-old Ballon d’Or nominee would fit in superbly at Camp Nou, as he’s shown he has the passing skills needed in order to bypass opposing pressure. He’s additionally well-equipped to smother any counter-attacks, with his pace being more than a match against the world’s best strikers.

Having been ?claimed to have requested a departure from Italy, you’d expect a host of clubs to compete for his signature, though his price and age may be off-putting for some. The latest in a long line of Italian defenders who have led Milan, Romagnoli could be a great fit for the Spanish champions.

The 25-year-old is intelligent in his timing, and always appears to be in the right place whenever he’s defending against an opposing forward. And his ball distribution ability makes him stand out, showing off his comfort with playing out from the back.

He’s won an impressive 84% of his tackles in Serie A this season, and has a pass completion rate of 90% – ideal for Setién and Barça’s ball-domination playing style.

With? ?I Rossoneri struggling during this campaign, 25-year-old Romagnoli may decide it’s time to move on for a greater challenge. Seemingly one of the hottest defensive transfer targets in the world right now, Upamecano has been impressive this season.

He has been exceptional for RB Leipzig, with his excellent technical skills a major part of his style of play. The Frenchman is also very good in the air and has the strong physique to hold firm in defending any opponent.

And you’d have to consider that the 21-year-old still has the potential to get even better, with his decision-making still a work in progress.

It could be a summer-long battle to sign Upamecano, with ?a bunch of Europe’s top teams racing to secure his signature. 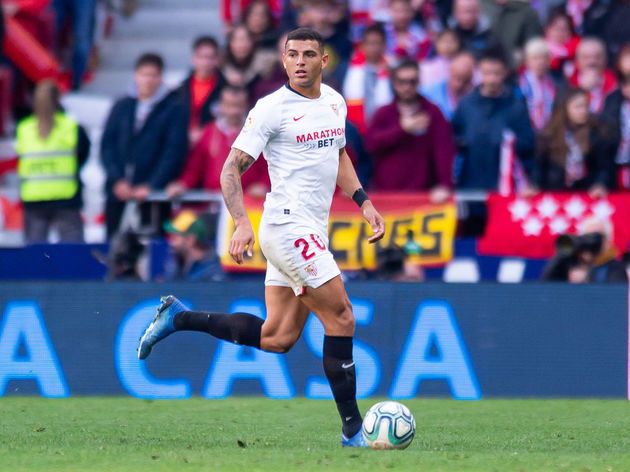 Not many knew of Diego Carlos before this campaign began, but he’s rapidly become one of La Liga’s top defenders.

The Sevilla centre-back, who only joined the club from Nantes last summer, has impressed many since his debut. He’s a tough defender, and is superb in the air, while also proving to be pretty handy with the ball too.

With a passing success rate of 82%, the Brazilian could certainly acquit himself well at Camp Nou. And he has won more tackles than the likes of Harry Maguire during this season, which further shows that he can be a strong presence at the back.

Having ?said he’s open to joining a ‘much bigger club’, it would be hard for Carlos to turn down the Spanish champions if they came calling. And despite Sevilla setting a release clause of £65m in his contract, you could see Los Palanganas accepting an agreeable offer for the 27-year-old, given that they’d certainly profit from his sale. If the Catalans missed out on Upamecano and still wanted to sign a young defensive talent, then they could do worse than going for Milenkovi?.

A regular for Fiorentina, the 22-year-old has hardly put a foot wrong this season, and is capable of heading away any cross he’s faced with. Compared by some to his idol Nemanja Vidi?, he’s a fearless defender, and also has great passing skills.

He made the highest number of successful tackles at the group stage of the 2018 World Cup, and this season has played every league game except one for La Viola.

With ?Man Utd and Real Madrid also interested, La Blaugrana may have to move quickly to sign the Serbian. Yet Milenkovi?’s displays suggest he’s more than capable of playing at a higher level, and could be a great player to have for the future. A key part of Lazio’s ?Serie A title challenge, Luiz Felipe has emerged as one of the best defenders in Italy at the moment.

Quick to anticipate any danger, the 23-year-old Brazilian is smart enough to know when to step forward, for an interception or block any incoming shots. He’s good at distributing the ball too, and can play pretty much anywhere in the backline.

While he’s not the most physical of defenders, the Brazilian boasts an impressive pass completion rate of 88% for the current campaign, and relies upon both his speed and positioning skills, to take on Italy’s best strikers.

If Barça are serious about signing Felipe, they would need to make a move soon. He’s ?recently been in talks with I Biancocelesti to extend his current contract, which would certainly include a release clause demanding a huge fee. Having worked under Setién at Real Betis already, Mandi could be a safe if not marquee signing for Barça.

With almost 100 La Liga appearances, he’s one of the more experienced options on the list, and has also won 51 caps for Algeria – which included playing regularly to help his country win the African Cup of Nations in 2019.

The 28-year-old is also able to play at right-back, which could be invaluable given the Catalans’ lack of options.

A rapid player, he’s also comfortable with playing out from the back. And the former Reims man is known for his quick anticipation abilities, having accumulated the seventh-highest number of interceptions in ?La Liga this season.

With his release clause set at just £26m, Mandi is certainly one of the more cheaper options La Blaugrana could target this summer. But his experience of playing under his former boss already makes a potential move more favourable, and Setién will know exactly how to get the best out of him.