Luis Suarez is set for an undetermined spell on the sidelines after Barcelona confirmed that the Uruguayan striker picked up an injury during la Blaugrana’s 3-1 defeat to Levante on Saturday afternoon.

Barcelona led at half time thanks to a penalty from Lionel Messi, but Levante blew their visitors away with three goals in seven second-half minutes to clinch the game and pile the pressure on Ernesto Valverde. 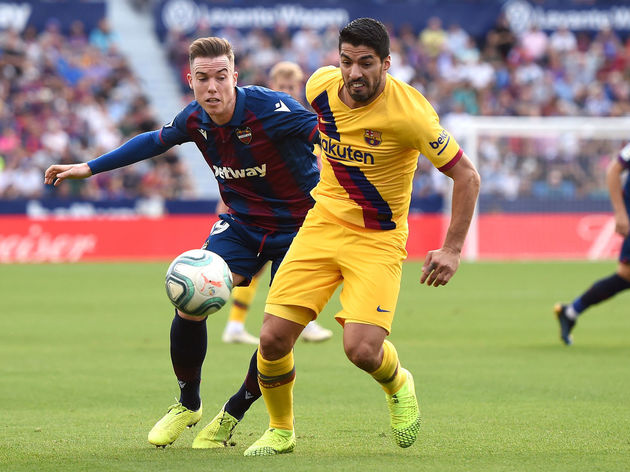 Suarez received the blow in the first half, and was in too much pain to continue beyond the 40th minute. Carles Perez replaced the Barca star, and ?Barcelona announced on Saturday evening that the 32-year-old has suffered an injury to his right leg, and is currently unavailable for selection.

The former Liverpool man has been an important part of his coach’s plans this year, bagging six goals in nine La Liga appearances for la Blaugrana, and has helped his side to sit top of the table after 11 matches.

[?LATEST NEWS] The tests carried out this afternoon have shown that Luis Suárez has a lesion in the right leg. Therefore, he is currently not available for selection, and the evolution of the injury will determine his availability pic.twitter.com/PWJkgec2Pk

?Barcelona may be ahead of all their rivals, but Valverde has been very unconvincing, and doubts over the manager’s future at the club continue to linger. Los Cules have struggled away from home this season, having won only two of their six games on the road.

Suarez’s fitness concerns will come as bad news for Valverde, who was forced to begin the season without talisman Messi following a serious problem, and his forward line has been ravaged by injuries all year.

El Pistolero’s injury may open the door to a return for ?Ousmane Dembélé, who was left at home for Barca’s trip to Levante due to tactical reasons, but the Frenchman could find himself back in the fold as Valverde attempts to fill the gap left by their goalscoring Uruguayan.