?Barcelona are prepared to listen to offers for defender Samuel Umtiti, who has been targeted by Manchester United in recent months.

The Frenchman has missed the majority of this season as a result of a knee injury, with Gerard Pique and Clement Lenglet shining in his absence. The Blaugrana also remain linked with a move for a new centre-back, leading to rumours of an imminent exit from the Camp Nou.

?United have been considering lodging a bid for Umtiti, and ?Goal claim that the Catalan giants would be prepared to enter negotiations with any interested parties if they receive a bid of at least £60m.

?Barcelona could demand as much as £77m for the World Cup winner, as they look to raise funds to finance some expensive transfers this summer.

After agreeing a £65m deal to sign Ajax wonderkid Frenkie de Jong, Barcelona are said to be pursuing his teammate, centre-back Matthijs de Ligt, who could command a similar fee. They see Umtiti as the best source of income, with both Thomas Vermaelen and Jeison Murillo are both set to leave the club for free when their contracts expire at the end of the season. Club officials are unwilling to part ways with either ?Pique or Lenglet, whilst young Jean-Clair Todibo is set to be given more time to impress.

As a result, Umtiti is the only centre-back who could command a sizeable fee, with United thought to be incredibly keen on signing the 25-year-old as they look to strengthen their defensive line. 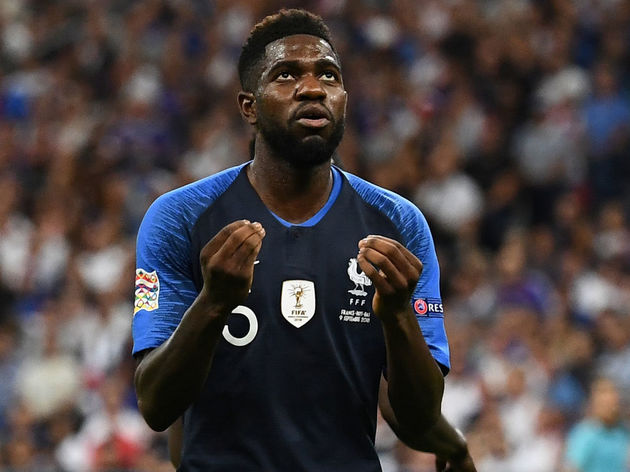 The Frenchman initially lost his place in the starting lineup after aggravating a knee injury in September. He returned to face ?Atletico Madrid seven games later, but was then forced into another extended period on the sidelines after the injury persisted.

He missed 11 league games, giving Lenglet plenty of opportunities to impress alongside Pique. The pair guided Barcelona to eight clean sheets in Umtiti’s absence, and the club now see Lenglet as a more reliable option than his fellow Frenchman.