Barcelona reduced the gap between themselves and La Liga leaders Real Madrid to two points with a 4-0 rout of Sevilla on Sunday night in a game which also included red cards for Ronald Araujo and Ousmane Dembele.

?Barca started the stronger of the two sides, but required a world class stop from Marc-Andre ter Stegen to deny Luuk de Jong the opening goal, the German defying science to get down to his left and stop the striker’s effort from nestling in the bottom corner.

The Dutchman was misfiring, and could have had another two before ?Barca went to town. Moments after De Jong’s header skidded off the turf and veered over the bar, Suarez was on hand to convert Nelson Semedo’s cross with a spectacular overhead kick.

After taking a beat to settle into the game, Barcelona were well and truly at their best, and even  Ernesto Valverde looked surprised at the quality of show his men were putting on. Some scintillating football freed Arthur to cross invitingly for Arturo Vidal to poke home, and then Dembele took it upon himself to end Diego Carlos’ professional career with a fake shot before cutting inside to stroke home number three.

The three goals came across a frantic eight-minute spell that left Sevilla reeling, and Julen Lopetegui’s men had no answer to a vintage Barcelona performance, although De Jong missed another good chance to pull one back early in the second half.

Lionel Messi, uncharacteristically quiet in a rampant first half, was keen to get himself back among the goals, and came within a Tomas Vaclik fingertip of doing just that after a mazy dribble along the edge of the Sevilla area. 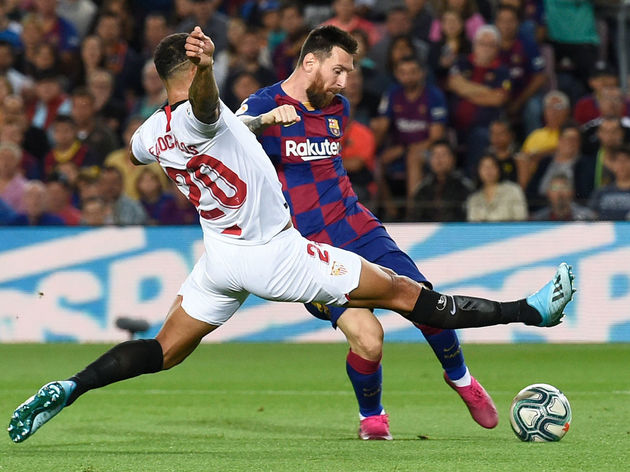 There was no such bad luck as the game edged towards the final ten minutes, however, as the Argentine curled a 25-yard free-kick up and over the wall to make it four.

Things then went a bit nuts when both Araujo and Dembele – the former making his debut from the bench – saw red for individual moments of madness, but there would be no further consolation for Sevilla, as the score stayed at 4-0.

After a wobbly start to the season had the club firmly embedded in a state of crisis, things were finally starting to look up for Ernesto Valverde ahead of this one. They had won three on the bounce since that damaging defeat at Granada two weeks ago, and a Champions League win over Inter during the week put some momentum behind them ahead of this one.

Valverde was forced into one change as Jean-Clair Tobido came in for the suspended Clement Lenglet, but he opted for another two, resting Sergio Busquets and Antoine Griezmann in favour of Vidal and Dembele. And while the personnel changes raised an eyebrow or two, both were justified shortly after the half-hour mark with a clinical double-salvo that put them out of sight.

The quality of the goals scored by Barca was, quite frankly, frightening. Suarez’s inch-perfect acrobatic effort set the tone, but the tiki-taka build-up for Vidal’s strike – while it wasn’t the cleanest of finishes – put you in mind of the great Guardiola side of ten years ago. The game was put to bed by half-time after Dembele sold Diego Carlos down the river and nonchalantly passed the ball into the far corner, but that didn’t stop Messi getting his name on the scoresheet with a free-kick that continued the trend.

The remit for Valverde’s side was a win against one of the toughest opponents La Liga had to offer to keep the pressure on Real at the top, and any win would have done. What we got,  however, went far beyond that, as La Blaugrana turned in a display that suggested their early-season crisis may have been no more than a false dawn.

Red cards for the debuting Araujo and Dembele, as well as a booking for Semedo that will see  him suspended for their next match, were less than ideal. But that won’t take the shine off what was an emphatic victory for the defending champions.

STAR PLAYER – In the absence of Jordi Alba, it wasn’t abundantly clear who would answer Barcelona’s left-back problems. With a solid display there during the week and a devastating attacking performance this time out, it looks as if Nelson Semedo has done that.

A special mention for Nélson Semedo. Played in an unnatural position vs. Inter and Sevilla, saved a few goals against Inter and helped set up a few against Sevilla. Loving his link-up with Ousmane today.

The Portugal international was involved in everything going forward, linking up with Dembele in a left-wing overload that froze Messi out the game during the first half. He crossed for Suarez’s ridiculous opener, and it was his bit of skill on the touch line – showing Jesus Navas the door with a drag-back before taking off towards the area – that kick-started play for the third. 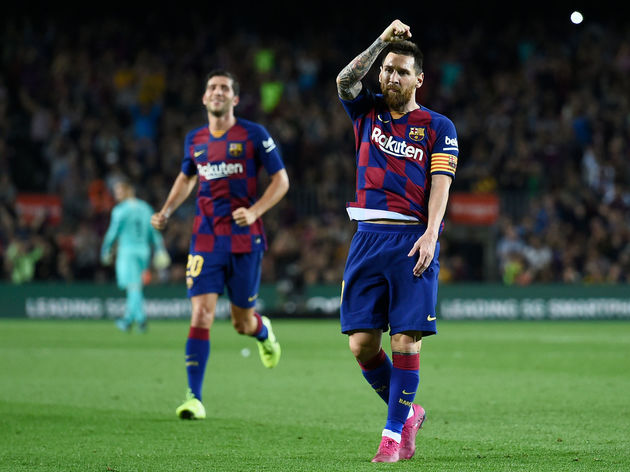 There is nothing on the immediate horizon for either club with an international break coming up, but Barca resume service away to SD Eibar in a fortnight, with a trip to Slavia Prague in the Champions League four days later.