?Lionel Messi spearheaded an emphatic 3-1 win over Borussia Dortmund on his 700th appearance for Barcelona, with the Catalans booking their place in the knockout stages in the process.

After a rather mundane start – which saw the hosts make life fairly easy for their German visitors, – the introduction of Antoine Griezmann for the injured Ousmane Dembele seemed to spark life into Ernesto Valverde’s side.

The Catalans upped their intensity ten-fold and their improved display was quickly rewarded as Luis Suarez pounced onto a deft Messi touch to finish past Roman Burki in the Dortmund net. That goal stunned BVB, and their deficit was doubled in a blink of an eye after Mats Hummels gave possession away to Frenkie de Jong in centre-midfield, the Dutchman finding Messi with his first touch who then went on to play an expertly crafted one-two with Suarez before finishing emphatically.

The introduction of Jadon Sancho for the away side at half-time saw their performance slightly improve, the Englishman almost immediately creating Dortmund’s first chance of the game since the opening minutes. But, they soon found themselves 3-0 down after Griezmann finished off a well-orchestrated counter-attack by the home side.

However, as it looked like it was going to get worse for Lucien Favre’s side, Sancho gave Dortmund a glimmer of hope 15 minutes from time after a brilliant right-footed strike from just inside the Barca box. The home side seeing off a late BVB resurgence as they booked their place in the last 16.

Here’s 90min’s breakdown of this one.

The Camp Nou faithful would’ve been thrilled to witness, arguably, their side’s most complete performance of the season. 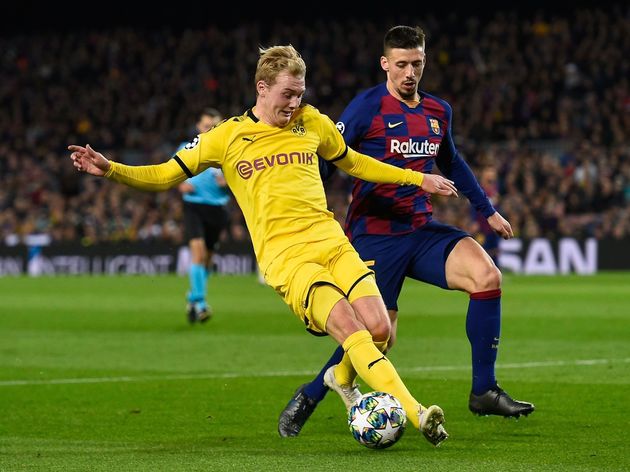 The centre-back pairing of Samuel Umtiti and Clement Lenglet – who was particularly superb – were stout throughout, doing well to sniff out the rotations of Dortmund’s interchanging forwards. Full-backs Junior Firpo and Sergi Roberto made life tough for the visitors down the flanks, making the pitch as wide as they could to ensure the likes of Messi had joy infield.

And while Frenkie de Jong and Ivan Rakitic were their industrious selves in the middle of the park, their intensity helping Barcelona’s front-three suffocate BVB deep in their own half, it was g

On what was a special occasion for Lionel Messi, the Argentine masterminded yet another magical performance on his home turf.

Fitting that Messi has served up another masterclass for his 700th appearance for Barça. Definitely in his top three or four hundred all-time performances.

He looked bright from the off, but it wasn’t until the 29th minute before Messi started to have an impact – his deft touch supplying Suarez for the first before finishing off a swift move for their second a couple of minutes later.

From then on, Dortmund had no hope of stopping what was nothing short of a genius at work. The second period started with another subtle touch, this time setting up Griezmann whose strike was well-saved. The 32-year-old did bag his second assist of the evening, however, as he spearheaded a rapid Barca counter – Messi beating Manuel Akanji one-on-one before sliding in Griezmann with a wonderfully weighted pass in behind Lukasz Piszczek. The Frenchman making no mistake this time around in front of goal.

A joy to watch.

After failing to make Barca pay for their slow start to proceedings, Dortmund found themselves 2-0 down in a matter of four first-half minutes as they failed to cope with Barca’s intensity in midfield and up front. 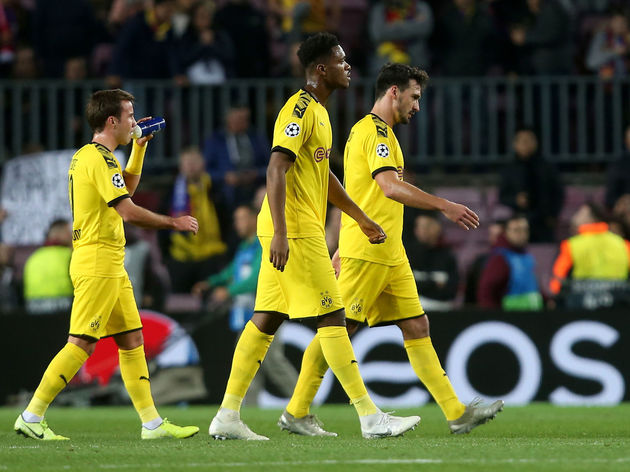 Going forward they lacked ideas, especially in the opening period. There was little threat on the break while Julian Brandt struggled to hold the ball up when it was fed into him – this often saw BVB exposed to the counter themselves.

While they improved defensively as the game went on and looked more threatening in the final third – more as a result of the home side dropping off – it was another disappointing night for Favre, whose job looks seriously under threat after tonight’s pretty dismal display.

Questions have to be asked of Favre as to why Sancho wasn’t in his starting XI. The visitors were barely a threat in transition while Sancho’s replacement, Nico Schulz, failed to provide enough cover for Raphael Guerreiro – who was going up against Messi for much of the first half -down the left.

Jadon Sancho has now scored 20 goals for Borussia Dortmund across all competitions and has also provided 28 assists.

Ridiculous output for such a young player. ?? pic.twitter.com/1cB5lqRAx4

Nevertheless, when the 19-year-old was introduced after half-time, he was nothing short of sublime, displaying a great attitude in the process. The Englishman quickly started to cause problems for Roberto down Barca’s right with the runs he was making in behind.

On the ball, he was confident as ever, creating the away side’s first chance since the opening stages as he fed in Brandt, but the German failed to convert. Nevertheless, Sancho was rewarded for his showing after Brandt found him on the edge of the Barca box, the winger proceeding to open up an angle for a shot which flashed past Marc-Andre ter Stegen at the near post. Then, a combination of the German shot-stopper and the bar denied Sancho a brace just a few minutes from time.

A statement made towards his under-pressure boss.

Both sides return to domestic action on the weekend – Barcelona AtleticoDortmundBundesliga