Barcelona maintained their nine-point lead at the top of La Liga, as goals from defenders Jordi Alba and Clement Lenglet earned a 2-1 victory over Real Sociedad.

The hosts appeared weary during the encounter, lacking the intensity and accuracy to pull away from their opponents. Lionel Messi was hesitant and wasteful when attacking Sociedad defenders, whilst Luis Suarez was noticeably leggy and struggled to leave any sizeable impact on proceedings. 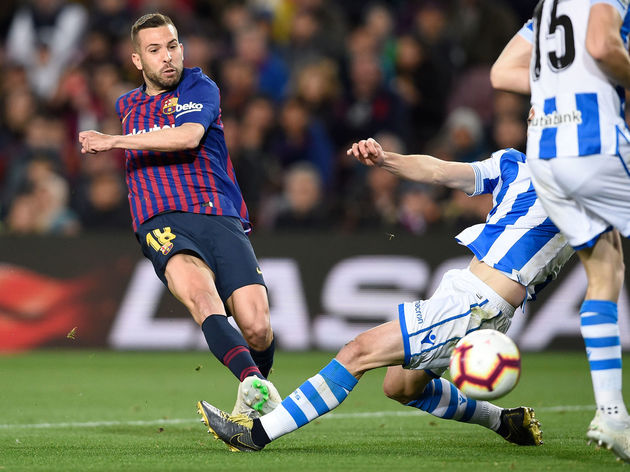 La Real frustrated the champions for large periods, but were undone when Lenglet rose highest to guide a magnificent header into the far corner of the net on 45 minutes. The visitors had almost taken the lead prior to that when Juanmi got in behind the ?Barcelona defence, only to have his weak effort smothered by Marc-Andre ter Stegen.

Juanmi made up for that miss early into the second half when he latched onto a smart through ball, clipping the ball beyond the sprawling Ter Stegen. Sociedad were level for just two minutes though, Alba rifling a low drive with his right boot past the impressive

Barcelona looked rather toothless throughout the contest, failing to create too many clear-cut opportunities. That is a concern for Ernesto Valverde as they prepare to take on the ?Premier League’s meanest defence in less than a fortnight’s time.

Barça simply must be better in an attacking capacity if they are to overcome ?Liverpool in their ?Champions League semi-final tie. ?Messi was workmanlike and industrious, but lacked the clinical edge to put the visitors to the sword. 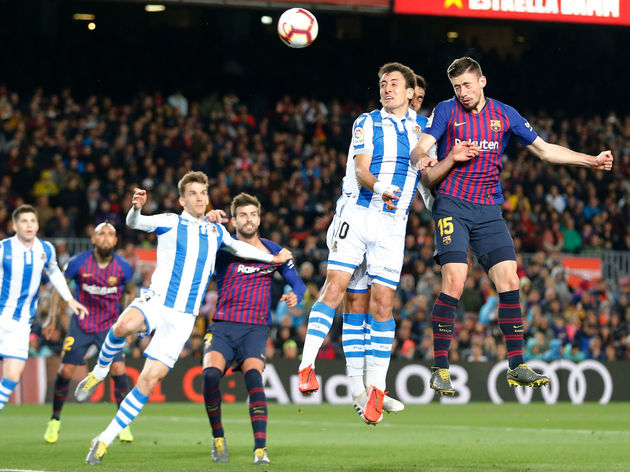 He had notched eight times in his last five ?La Liga appearances before Saturday night’s game, demonstrating his importance to the team.

Barça were far from their fluid, flowing best with several stars lacking their usual sharpness. However, two of their key men in defence were superb from the first minute until the last. Ter Stegen’s double save towards the end of the first period maintained parity, but it was Lenglet in front of the German who stole the show.

Most appropriate GIF ever incoming ?? pic.twitter.com/ag1RaF7AD9

??The 23-year-old was composed all game, showing solid distribution, intelligent pass selection and solid reading of platy. He also made several critical interventions to end Sociedad attacks and generally read the play excellently, though was powerless to prevent Real’s goal..

His opener moments before the break crowned a fine all-round display from Lenglet, the centre-back grabbing his first La Liga goal. He continues to develop nicely under Valverde’s tutelage, with performances like this cementing his place in the coach’s first-choice backline.

One of two matches every season where Rulli turns into peak Buffon.

The Catalans travel to eighth-place