Barcelona and Arsenal met on Sunday evening for the annual Joan Gamper Trophy match at Camp Nou and it was the Catalan side who came out on top, as they beat the Gunners 2-1.

Barça had Luis Saurez to thank on the night, as his introduction to the game in the second half changed proceedings and played a huge part in defeating their Premier League opponents.

The home side dominated possession in the first half as you would expect, but they struggled to create any clear cut chances, despite some tidy play in the final third.

?The Gunners were struggling to find a way into the final third but did manage to break the deadlock on 36 minutes when ?Pierre-Emerick Aubameyang rifled a shot home after a neat turn on the edge of the box.

The second period continued in much the same way, as the ?Blaugrana piled on the pressure and Unai Emery’s men struggled to get out of their own half. Barça thought they’d drawn level when Jordi Alba was played through and squared the ball across goal for a tap in, but Joe Willock’s miraculous goal-line clearance preserved the Gunners’ slender lead. After weathering a storm, Arsenal gifted the home team an equaliser on 69 minutes when Ainsley Maitland-Niles misjudged a back pass to Bernd Leno and saw the ball roll into his own net. Out of nothing the match was level.

From then on, both managers began to make several substitutions and the game became disjointed and did not make for free-flowing attacking play from either side.

The match looked to be heading for penalties until Sergio Roberto’s chipped ball found substitute ?Luis Suarez who volleyed home first time to give the hosts a 2-1 victory in the final minute.

Despite the victory, Barcelona continued to look unconvincing without two of their first-choice front three in the starting lineup. Lionel Messi and Luis Suarez both started from the bench, as Barca looked somewhat toothless in attack, despite large spells of pressure.

Antoine Griezmann played well and linked effectively with those around him, but looked as though he was missing some world-class quality around him to make the most of his quick passing. 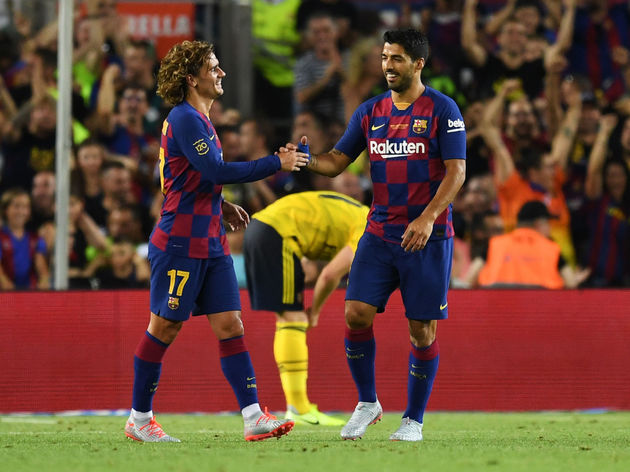 Suarez’s introduction in the second half sparked the home side into life, as he provided a constant threat in his short time on the pitch.

He eventually got his reward in the last minute of normal time, finishing calmly on the volley to give his side victory.

Frenkie de Jong shone for Barcelona on Sunday and controlled the game in midfield from minute one. He set the tempo early on, as his side spent most of their time in the opposition half.

Despite linking well with more attacking players ahead of him, De Jong and his teammates were unable to create that golden chance to score a goal while he was on the pitch. With their ?La Liga campaign still a couple of weeks away, he was taken off at half time, as Arsenal performed valiantly against Barça and will count themselves unlucky not to have won the game, but there were still gaps in the team, which may not fill the Gunners faithful with confidence ahead of the new season. Albeit with a few notable absentees, Unai Emery’s team looked short in midfield and far from secure at the back. With the recent signing of Nicolas Pepe, Arsenal look as though they will have one of the most dangerous attacks in English football next year, but without a strong base from which to build, they may still struggle to break back into the top four.

Nevertheless, there were some positives to take from the match at Camp Nou, in what was their final pre-season game, and they will go into next week’s ?Premier League opener against Newcastle full of confidence.

Pierre-Emerick Aubameyang picked up where he left off at the end of last season, as his wonderful first-half strike gave the Gunners a lead against the run of play.

It will come as no surprise that the 30-year-old was a key figure in the Arsenal team, as they faced as tough a test as they could hope for ahead of the brand new Premier League season.

Aside from his goal, he maintained a regular threat to the Barca backline, despite finding opportunities to do so few and far between.

Ernesto Valverde’s side face a double-header against Napoli in the coming week, as they complete the final two legs of their pre-season tour of the United States.?

Arsenal, on the other hand, have now finished pre-season duties and will kick off their Premier League campaign away to Newcastle next weekend.