On Sunday afternoon Barcelona put some of the pain of last week’s Champions League exit behind them, with an uninspiring but efficient victory against a stubborn Getafe side.

Undoubtedly looking to capitalise on Barcelona’s post Champions League exit slump, Getafe made a lively start to the contest. Content to let Barcelona have much of the ball – they counter attacked with pace and aggression and were nearly rewarded with an early goal, when striker Molina launched his effort over the crossbar.

When Barcelona eventually broke the deadlock, it was through a well executed set piece rather than a polished series of passes. Gerard Pique’s flicked header was parried by Getafe’s keeper, but the Spaniard’s front post run had dragged the Azulones’ defenders out of position, leaving Arturo Vidal free to poke home the opening goal of the game.

Barcelona saw out the rest of the match without any major scares, dominating possession and grabbing a late goal after a clever one-two on the edge of the area between Lionel Messi

In an alternate reality where Ousmane Dembele Champions League

However, the embarrassment of having surrendered such an imposing lead in such abysmal fashion has put a major dampener on what the Barca faithful had been hoping would be a historic season. Ernesto Valverde made two changes to the midweek side, with Mar-Andre ter Stegen making way for Jasper Cillessen in goal, and Samuel Umtiti getting a rare start. 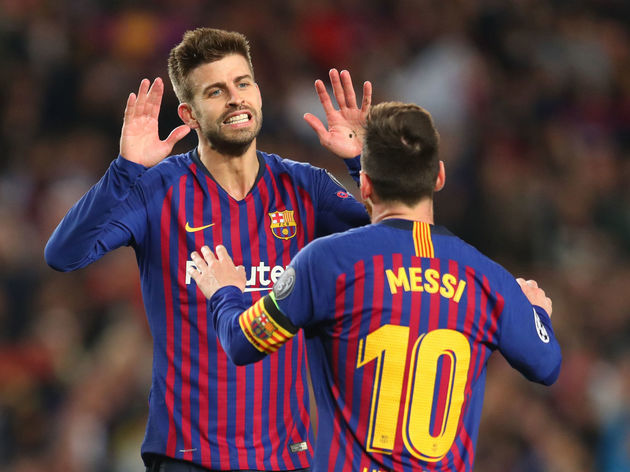 After bearing the brunt of the criticism for Barcelona’s lacklustre defending on Tuesday night, Pique

The defender provided the assist for the opening goal, as well as teeing up Malcom for a chance he somehow failed to convert in the second half, after a clever dinked ball from Philippe Coutinho.

Getafe entered the fixture sitting in fourth position and in possession of a Champions League spot, after a sensational campaign that has seen them improve on last season’s eighth place finish to brush shoulders with some of La Liga’s wealthiest and largest clubs. Despite looking lively on the counter attack, particularly early on, Getafe failed to ever gain a proper foothold in the game and did not manage to register a shot on target in the 90 minutes.

With Valencia picking up a 3-1 victory against Alaves, Getafe have dropped down to fifth place and will need results to go their way next week to ensure they are playing Champions League football next season. The veteran striker was one of Getafe’s few consistent threats throughout the game, and was unfortunate not to grab what would have been an equaliser when his header struck the post late on.

Although he failed to convert the chances he had, he was tireless in his pursuit to manufacture opportunities for the entire 90 minutes.

Barcelona’s final La Liga game of the season will be an away trip to Eibar, which will be followed by a Copa del Rey final against Valencia. Both sides will be aiming to finish their seasons on a high after disappointing European cup exits at the hands of Arsenal Liverpool

Getafe will welcome Villarreal  to the Coliseum Alfonso Perez knowing that they will have to win and outscore Valencia in order to qualify for next season’s Champions League.