?Barcelona claimed their eighth La Liga title in 11 years, as Lionel Messi came off the bench to sink visitors Levante in a slightly stressful 1-0 victory at Camp Nou on Saturday evening.

La Blaugrana dominated possession and territory for the entirety of the contest, yet looked toothless as they let their opponents off on countless occasions. However, their Argentine superstar was introduced at half-time and finally broke the deadlock, sweeping a shot into the far corner just after the hour mark ?to guarantee top spot with three games to spare.

?Barça were guilty of wastefulness in the first period, squandering a whole host of presentable opportunities after incisive build-up play. Philippe Coutinho could have had a hat-trick inside 30 minutes, but was continuously denied by the outstanding Aitor Fernandez in the Levante goal.

The former ?Liverpool playmaker watched the goalkeeper parry a couple of skidding efforts behind, before missing a gilt-edge chance as his free header from 10 yards out went straight down Fernandez’s throat.

Despite his frustrations, Coutinho looked to be in a determined mood and rattled the crossbar with a marvellous free-kick. However, he was replaced by Messi at the break, the substitution proving to be decisive for the newly-crowned ?La Liga champions. 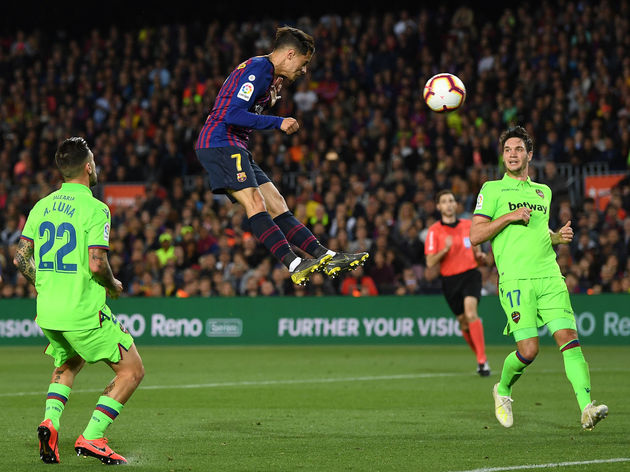 Check out our breakdown of the game below.

For all their masterful interplay and ability to carve out opportunities, Ernesto Valverde’s men were lacking a clinical edge.

Luis Suarez was one of a handful of players who disappointed on Saturday night. He doesn’t appear to have the necessary fitness levels as he drifted through the game. If this victory proved anything, it is that the Catalans rely heavily upon Messi. He was the difference, slotting home to secure Barcelona’s spot on the Spanish throne. But, can they really win against Liverpool in midweek if they continue to struggle in front of goal.

The Reds are rampant at the moment, meaning the La Liga club will need to bring their usual accuracy to overcome them. Fail to do that and they may have to settle for just domestic silverware this campaign.

Dembele was a constant danger, always keeping the Levante defenders on the back foot with his direct dribbling and intelligent runs off the ball. He linked wonderfully well with Nelson Semedo down the right flank in the opening half, getting in behind the opposition defence on a number of occasions.

Dembélé makes some excellent runs, but it’s not often he’s found. We always seem to forget he’s there sometimes.

The Frenchman thrilled the crowd with his fearless, incessant drives forward, whilst his teammates should have made more of his superb deliveries into the box. Dembele’s role changed when he switched to the opposite side, the winger drifting inside and feeding deft throughballs on to others in red and blue.

Messi may have been the goalscorer, but it was the ex-?Borussia Dortmund wide man who dominated proceedings. Many of those around him put in underwhelming performances, but Dembele can be mightily proud of his night’s work.

Meanwhile, Aitor has made 9 saves for Levante so fsr.

The Catalans play the first leg of their ?Champions League semi-final tie with the Reds on Wednesday, welcoming Jurgen Klopp’s buoyant side to the Nou Camp. They follow that up with a league fixture away to relegation-threatened Celta Vigo, with Valverde likely to rest players given the team’s European commitments.