Barcelona’s last-gasp swoop for Pierre-Emerick Aubameyang looks to be paying dividends after the striker scored a hat-trick in resounding 4-1 away at Valencia.

Aubameyang led the Catalans to a resounding victory at the Mestella with his first Barcelona goals on his full La Liga debut, after coming off the bench in the second half in previous league encounters against Atletico and Espanyol.

The former Arsenal striker, who last found the net in October in the Gunners’ 3-1 win over Aston Villa, now has 10 goals overall this season.

Aubameyang’s first goal came when he calmly hit the upper corner in a one-on-one situation in the 23rd minute, and his second came from close range in the 38th minute to make it 3-0 after Frenkie de Jong netted Barcelona’s second.

Initially, Barca’s fourth goal was attributed to Pedri, but when the referee issued his match report after the game, he switched it to Aubameyang as Pedri’s strike was deflected off the striker’s back on its way in.

Carlos Soler scored a consolation goal for the locals, with many of the nearly 40,000 Valencia fans at Mestalla Stadium again protesting against Singaporean owner Peter Lim.

The win lifted Barcelona into fourth place on 42 points from 24 games, tied with Atletico who are fifth on goal difference. Real Madrid top the table with 57 points.

“We are beginning to find that efficiency that we were lacking earlier in the season,” captain Sergio Busquets told reporters.

“I hope Aubameyang is that one piece that we were missing up front. He is a great player that arrived hungry because he was not getting many opportunities at his last club. It is a luxury having him in our team.”

Second-place Sevilla stumbled in their pursuit of Real Madrid after being held 1-1 at Espanyol, leaving them six points behind the league leaders.

Rafa Mir opened the scoring for the visitors in the 36th after an assist by Papu Gomez, who had come on 10 minutes earlier to replace the injured Anthony Martial.

Espanyol equalised early in the second half with a close-range header by Sergi Darder, before Sevilla defender Jules Kounde was sent off, given a straight red card after complaining to the referee.

Inter Milan missed the chance to climb back to the top of Serie A as they suffered a shock 2-0 home defeat by Sassuolo on Sunday.

The hosts fell behind after eight minutes with Giacomo Raspadori drilling a shot through goalkeeper Samir Handanovic, before Gianluca Scamacca headed into the net when unmarked to double Sassuolo’s lead.

Inter were all at sea, and could have gone into the break 3-0 down when Domenico Berardi’s effort hit the crossbar.

After the break, the hosts piled on the pressure, with goalkeeper Andrea Consigli making several fine saves to keep the visitors in a commanding position.

Sassuolo should have put the game to bed with late chances, but two goals were enough as Inter remained second on 54 points, two behind leaders AC Milan. Sassuolo climbed to 11th.

“I am very angry with how we played,” Inter coach Simone Inzaghi told DAZN.

“We had three days since Wednesday’s game (against Liverpool) and we talked about the fact Sassuolo beat Juventus and Milan away – we had to be wary.

“We tried to do everything in the second half, created so many chances and were unlucky, but the fact remains we should’ve had a different approach.

“We will analyse the situation. We know there are 13 games to go, we are all up there and want to keep going forward. The fact is, a team that wants to win the Scudetto cannot get the approach as wrong as we did today.”

Earlier, Fiorentina beat Atalanta 1-0 to stay in the race for a place in European competitions, while Venezia and Genoa played out a 1-1 draw.

Robert Lewandowski scored twice as Bayern Munich came from behind to beat last-place Greuther Furth 4-1 in the Bundesliga on Sunday.

The Poland star took his league-leading tally to 28 goals in 23 games and helped Bayern stay six points ahead of Borussia Dortmund, who thrashed Borussia Monchengladbach 6-0.

Furth captain Branimir Hrgota fired the competitive underdogs ahead in the 42nd minute when his free-kick took a decisive deflection off Bayern’s Marcel Sabitzer.

Lewandowski equalised only a minute into the second half and Bayern kept pushing, forcing an own goal from Sebastian Griesbeck just past the hour-mark. Griesbeck also scored an own goal in the previous meeting between the two, which Bayern won 3-1.

Max Christiansen struck the post as Furth pushed for an equaliser, but Lewandowski sealed Bayern’s win with an 82nd-minute header

Borussia Dortmund captain Marco Reus played a part in five goals as his side hammered his former club Borussia Monchengladbach 6-0. 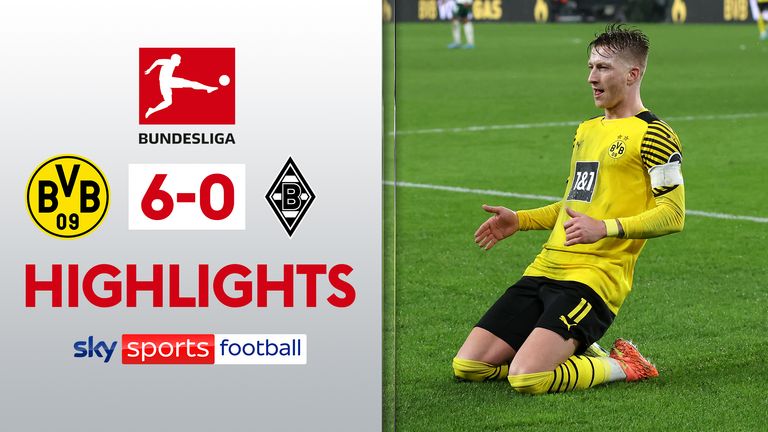 Highlights of the Bundesliga match between Borussia Dortmund and Borussia Mönchengladbach.

Reus, who switched from Gladbach to Dortmund just over a decade ago, scored two and provided three assists, but he opted not to take a penalty his side were awarded in added time, with Emre Can stepping up and converting to complete the drubbing.

Reus opened the scoring in the 26th minute by pouncing on the rebound after Switzerland keeper Yann Sommer had parried a shot from Donyell Malen.

Reus returned the favour six minutes later, playing a one-two with Dutchman Malen, who powered a shot through the grasp of Sommer to double Dortmund’s advantage.

Dortmund put the result beyond doubt when Reus teed up Marius Wolf to score in the 70th-minute, two minutes after he had come off the bench.

The captain added his third assist of the game four minutes later as Youssoufa-Moukoko, another substitute, netted Dortmund’s fourth.

Reus then got back among the goals by smashing the ball in after a long punt from defender Mats Hummels, before Can completed Gladbach’s humiliation from the spot after Wolf was felled in the box.