In the year 2019, Argentina are really quite bad at playing football. Anyone who watched them kick off their Copa America campaign with a distinct lack of style can attest to this.

It’s not just that they lost the game 2-0. Teams can often play well and still lose games, and Colombia are definitely no mugs. ‘The score didn’t reflect the game’ had joined the pantheon of awful football cliches a long time ago, but this was certainly not the case. They lost the game because they were very poor. Very, very poor. Pinpointing precisely why they were so dreadful isn’t easy, though the manager clearly has to take some of the blame. The side that Lionel Scaloni picked always seemed to be shy a few midfielders, and that proved to be the case.

With no ball-winner and no one in the centre of the field able to take the ball on the half turn and feed their talented attackers, Argentina were lethargic, easy to defend against, and downright nap-inducing for large portions of the game.

Fell asleep at HT, watched the second half this morning. Argentina still dreadful. Colombia already look a classic Queiroz team – good and solid, real pace to threaten on the break.

The people tasked with organising Argentina’s preparation for the tournament also deserve a degree of scrutiny. Since being eliminated from the World Cup by France almost a year ago, the Argentinian national team have played just three fixtures; two of which were almost three months ago, with the third being a rout against a Nicaragua side currently ranked 139th in the world.

A lack of cohesiveness and competitiveness was not just expected, but almost guaranteed by such dismal preparation. To put it into perspective, prior to their Nations League semi final clash against the Netherlands at the beginning of the month, England had played eight times since the World Cup – including fixtures against Spain and Croatia.

Whilst it may be unfair to compare Argentina to a side that was competing in the Nations League throughout much of the year, it still shows that there are opportunities to schedule international fixtures. Even fellow South Americans Brazil managed to play two warm-up games, and they are blessed with a far more talented crop of players than this Argentina squad. 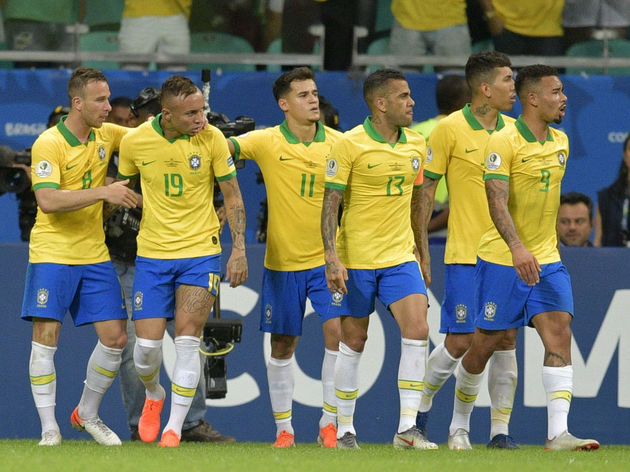 Of course, there is no shame in having a less impressive squad than a Brazil team that boasts a spine of Alisson, Thiago Silva, FernandinhoLiverpool form than his Barcelona showings), and Roberto Firmino.

Nicolas Otamendi has been a solid, dependable servant for Manchester City for years, but when everyone is fit he doesn’t start. Across the midfield, the likes of Giovani Lo Celso and Leandro Paredes are clearly talented footballers, but they are accompanied by a player who still plies his trade in the Mexican league.

The entirety of Argentina’s defence and midfield are made up of good footballers, but not great footballers.

Paulo Dybala is only good enough for a spot on the bench. Yet even the proven quality of a player like Angel Di Maria has always been most apparent whilst playing within a dominant side – he is a player who excels when surrounded by top class teammates, something that is in short supply when he plays in an Argentina shirt. Of course, when it comes to discussing Argentinian football there is only one name that really matters.

Even Lionel Messi – the man considered by many to be the greatest footballer of all time – has never been able to consistently replicate his club form for his country, and will always be reminded of the empty shelf – in what must be a trophy cabinet of Narnian proportions – where an international crown should sit.

Of course, many of Messi’s staunchest supporters will inevitably point to his crowning as the player of the tournament for the 2014 World Cup, where Argentina lost the final against Germany thanks to an extra-time winner from Mario Gotze.

However, even those with the thickest of Messi-tinted glasses on would have to admit that he was a dubious choice for the Golden Ball that year. FIFA clearly followed some flawed logic of; the best player in the world is in the World Cup final, therefore he must be the best player of the tournament.

All this when in fact, by his own standards, he had been fairly average.

The Argentine magician’s inability to claim glory for his country was further accentuated at approximately 22:00 on Sunday 9 June, when Portugal and Cristiano Ronaldo notched up another trophy by claiming the inaugural Nations League title. Another international triumph for Messi’s arch rival sent the Twitter warriors into a frenzy; like coiled springs patiently waiting for the war cry that was referee Alberto Mallenco’s final whistle. The result was, of course, indisputable proof that Ronaldo was the better player than Messi.

The fact that the former had only played in two of the six fixtures, and that his teammate Bernardo Silva had just run himself into the ground to claim the man of the match and player of the tournament titles, were inconsequential details – this was about Ronaldo’s triumph, and almost more importantly, Messi’s failure.

This has long been the narrative of the rivalry between these two titans of the game: fans of each player seem to need to tear one down in order to build the other up. Liking both is heresy.

Whilst the last thing the world needs is another article comparing Messi and Ronaldo, it does serve in reinforcing just how below par Argentina’s squad is compared to Portugal’s. That is not to rob Ronaldo of his personal performances, or to completely dissolve Messi of blame for his lower standards in an Argentina shirt, but If you can somehow manage to make Lionel Messi look anything less than extraordinary, then there are serious, serious problems.

It is clearly far too early to write off Argentina for this year’s Copa America; they have only played one game, and it was against one of the strongest sides in the tournament. As lamentable as they were last Saturday, one would think that they will be much improved in the early hours of Thursday morning when they face a Paraguay side who only managed a draw with Qatar in their opening fixture.

However, it is bordering on the impossible to envisage this Argentina side improving drastically enough to claim their first Copa America since 1993. While football fans around the globe will be hoping that this will be the year Messi breaks his international voodoo, there is very, very little evidence to suggest that this squad is capable of it.

All we can say with absolute certainty is that whether Argentina lose all their group games and Messi misses three penalties and five open goals, or whether he scores 20 times and single-handedly gifts Argentina the 2019 Copa America, stances on Twitter will not alter one iota.