?When a goal is voted the Greatest of All Time at any club, it is a big deal. When it is given the GOAT nod at Barcelona, it’s meteoric. It’s seismic. It’s United Nations-worthy. Unfortunately, the UN didn’t see it that way, so they palmed it off on a mere 500,000 fans worldwide.

What did they select? This.

April 18th, 2007. A date where the US Supreme Court upheld the Partial-Birth Abortion Ban Act in a 5-4 decision (not quite 5-2, is it?). A date where Princess Haya Bint Al Hamzah, Princess of Jordan and spouse of Mohammed bin Rashid Al Maktoum (prime minister of the UAE, and overseer of 90% of modern football clubs) celebrated her 33rd birthday (or maybe not, Wikipedia have it down as May 3rd). What we do know, definitely, is that this was the day that Lionel Messi shocked the world.

April 18th 2007, and a fairly innocuous looking Copa del Rey semi-final first leg on the calendar for ?Barcelona against Getafe – that other team from Madrid. It is a goal against the capital lesser’s side, not their Clasico counterparts, which remains embedded in every Barca fan’s head all these years later. Not that this is about Getafe. Or La Blaugrana, for that matter.

This is about Messi.

I could tell you the context of the clash, the things that preceded and proceeded this gargantuan moment, but what’s the point? It has all faded into obscurity for a reason. Because there were only 13 significant touches of the ball that occurred during this game.

He receives the ball from Xavi – probably Xavi, there seems to be a grainy number six on his back (again, it doesn’t matter) – a few metres inside his own half, on the right touchline. Despite his position in this fairly harmless part of the pitch, the Argentine still has two onrushing Getafans on him right away.

One is more eager than the other, and flies into Messi with the kind of careless abandon of a player unaware that his opponent is a man who, in two years time, will begin a then-unprecedented run of four consecutive Ballon d’Or wins.

He’s dealt with quickly and ruthlessly. Messi gathers the ball with one exacting touch, and a split-second later his second touch has knocked it softly through the unknowing defender’s legs. His third completes the nutmeg, taking him barrelling – although Leo Messi doesn’t barrel, he glides – towards the halfway line.

That second fella, having seen his mate get thoroughly embarrassed, doesn’t heed the warning; he barrels – and this time it’s definitely a barrel – towards the number 10 with vengeance in his heart and anger in his eyes.

This was ill-advised. All too aware that this bitter foe is coming for him next, the magician readies his next trick. With a swift duck of his head, swivel of his hips and shift in direction, Leo has knocked it through another fool’s legs. That’s his fourth. He’s now over the halfway line.

The confidence with which ’13 touches’ was thrown out earlier was misplaced. The problem, or the beauty, of Messi’s dribbling skills is that there are occasions where you think he might’ve touched the ball – he must’ve, because it’s so tethered to his foot – but you can’t be completely sure. It’s either 13 or 14. 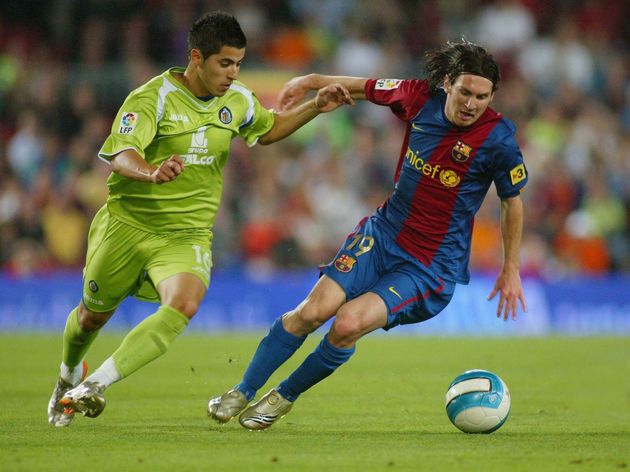 In any case, his fifth, sixth, potentially ghost-seventh, eighth, ninth and tenth take him – with blistering speed – towards the final wave of defenders. In less than three seconds, he’s approaching the box.

In all this time, neither of the nutmegged club members have given up. They are still in fevered pursuit, desperately trying to get a grasp of the blurring blaugrana shirt that has inflicted this humiliation. Even without the distraction of a ball at their feet, they never stood a chance. Eventually, the first victim relents. He knows his fate is sealed, why tempt it further?

The second one? Not so much. He thinks he’s gathering speed, thinks he’s got an opportunity to stop history in its tracks. And so he leaps in to the rescue. The problem is, he has no awareness of his position on the pitch, and the presence of his left-sided centre back right in front of him.

And so, instead of thwarting the move, he simply succeeds in obstructing his more defensively inclined friend from attempting a challenge. That’s where the 11th touch comes. With brisk dexterity, Messi taps it to the left, away from both, but right into the path of the right-sided centre back.

Having seen all his good-for-nothing colleagues fail so dramatically, the right-sided centre back is in no mood for niceties. He’s been waiting for this opportunity. He jockeys, he jockeys, and then seeing his opportunity to let rip – the aforementioned 11th touch rolling towards him – he unleashes a Chopper Harris-style lunge. 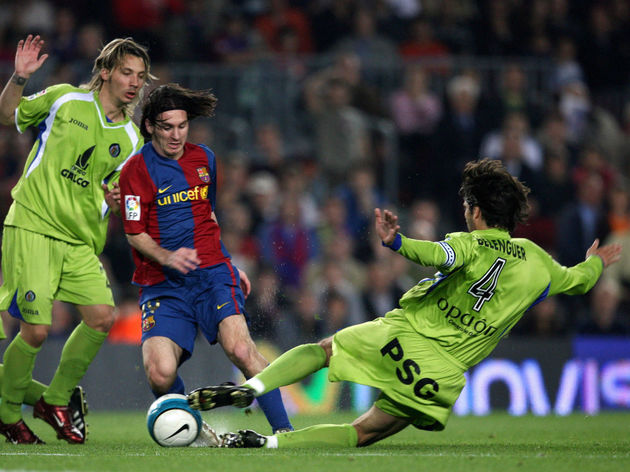 But it’s futile. The number 10 has seen him coming just like he’s seen everyone else, and after tapping it towards him with his left foot, he instantly reverses this with another left-footed tap, like an elongated flip flap.

Having been steadily travelling diagonally inwards from the touchline all this time, this 12th touch has suddenly taken him square and, more importantly, into the penalty area. It’s just him, the goalkeeper and an awestruck Samuel Eto’o.

With the ball still rolling, but always within his control, he takes a moment to steady himself. He slows the game down and then, with a sly feint of his head and feet, he feigns to shoot – sitting down the goalkeeper before tapping it around his felled body with his left foot and, in a final flourish, knocking the ball over a recovering defender and into the net with his right. 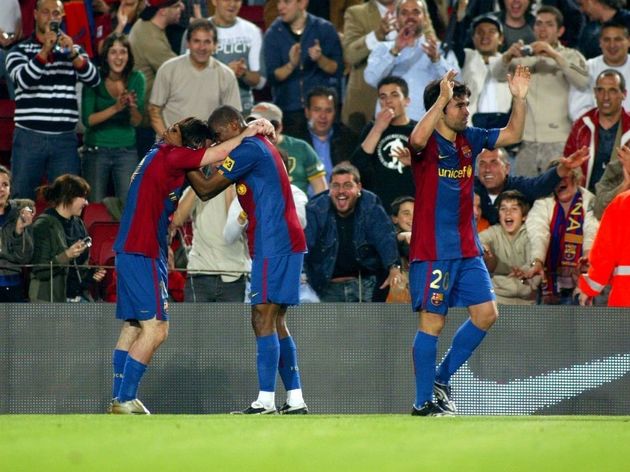 No it wouldn’t. Because, in every way, ?Lionel Messi transcends the conventions of football.