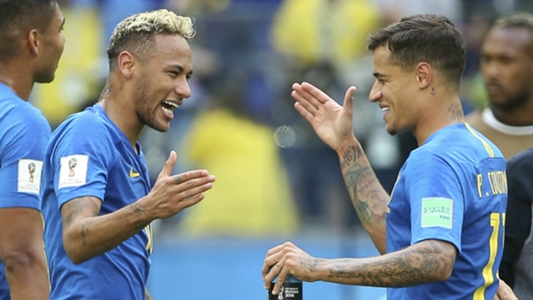 Philippe Coutinho is flourishing in Neymar’s shadow and could prove instrumental in Brazil claiming a sixth World Cup, according to Roberto Carlos.

The Barcelona star has scored twice in Brazil’s three games so far at Russia 2018, while Neymar has found the net just once – hitting home the second in the 2-0 win over Costa Rica.

“Philippe is in a very good moment, in Barcelona and in the Brazilian team,” the former Real Madrid man said.

“He’s a very important player for Brazil because the pressure is all on Neymar, then Coutinho shows up. The Brazilian team have a very strong chance to win this World Cup.

“Neymar is getting better. He’s relaxed. He’s recovered well from his injury. He’s a very important player for Brazil. He is very calm, that is the most important thing. When he is calm I know that he can offer much more.”

Brazil take on Mexico in the last 16 on Monday and Roberto Carlos believes Brazil should not take one of the World Cup’s surprise packages lightly.

“There is no easy game in this World Cup,” he added.

“It’s very balanced, really equal. In order to be the champion, Brazil will have to overcome all difficulties, but I think we have a great team and we can get the title again.

“Be careful with Mexico. They look like a normal team, but they have lots of quality.”