?Barcelona take on Alaves at Marc-Andre ter Stegen (GK) – The German goalkeeper was on song against Sociedad, making several crucial saves during the contest. His double stop in the closing stages of the first half in particular showcased his excellent reflexes and positioning.

Nelson Semedo (RB) – After joining from Benfica in 2017€31.5m out of the ?Barcelona coffers, but consistency has been his downfall.

Gerard Pique (CB) – Despite an underwhelming display on Saturday, this is widely considered to be ?Pique’s best season in blue and red, with Valverde

Clement Lenglet (CB) – The Frenchman’s deft header against Sociedad on the stroke of half time was pivotal, breaking the deadlock for his misfiring side. It capped a fine all-round display from Lenglet, justifying his continued selection in Valverde’s lineups.

Jordi Alba (LB) – Like his defensive compatriot, Alba grabbed an important goal to give his team the lead. It was a lovely goal, too, the full-back stepping inside before sweeping an effort into the far corner with his weak foot. Sergio Busquets (CDM) – Without Busquets keeping things ticking over on the weekend, Barcelona appeared lost, aimlessly spraying the ball around. His arrival towards the end of the match brought impetus and purpose to the heart of their midfield.

Arturo Vidal (RCM) – It was a high-energy showing from Vidal against La Real, though it lacked any end product. He was dogged and bullish, but ultimately failed to offer much in an attacking capacity; he will be keen to prove his worth against Alaves.

Arthur (LCM) – The young Brazilian playmaker is a superb distributor of the ball, linking up well with teammates and creating space with his intelligent movement. He is looking like a very savvy purchase after arriving in the summer. 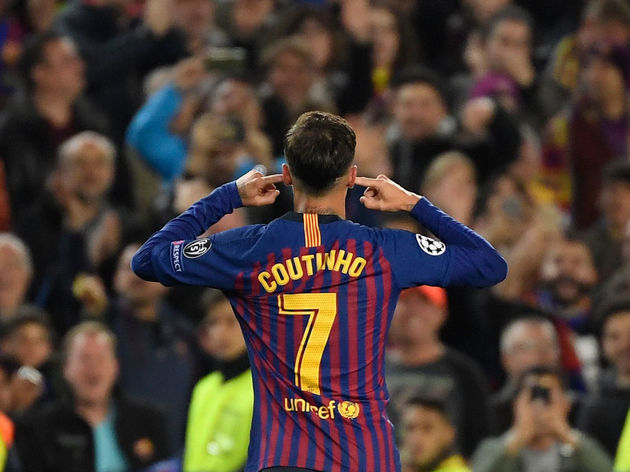 Lionel Messi (RW) – It may have been an indifferent night for ?Messi on Saturday, but no one in world football doubts his extraordinary ability. His 45 goals in all competitions are fuelling Barcelona’s charge for glory in ?La Liga, the Copa del Rey and the ?Champions League.

Philippe Coutinho (LW) – ?Valverde has downplayed the apparent rift between the Camp Nou faithful and Coutinho that has surfaced in recent weeks. However, his ill-advised celebration against ?United will have vexed fans, leaving the onus on him to make amends if he is to have a future in Catalonia.

Luis Suarez (ST) – The Uruguayan has been fruitful in front of goal this year, yet no longer seems capable of producing the tireless, genius performances that characterised his early career. He is now more of a predatory poacher than the eminent threat that terrorised ?Premier League defences.