?The world’s best player takes part in the world’s biggest game – at club level, at least – on Wednesday, as Lionel Messi faces Real Madrid for the 42nd time in his career.

Should he feature at Camp Nou as expected, the 2019 Ballon d’Or winner will equal Xavi Hernandez for the most appearances ever in El Clásico for a Barcelona player. However, Madrid captain Sergio Ramos, barring any last-minute injury problems, will take his own tally to 43 outings – the most of any player on either side. Perhaps unsurprisingly, no player has more assists than Messi in the fixture’s history either (14).

Messi’s Clásico story began way back in November 2004, when the then-17-year-old was included on the bench for a 3-0 win at Camp Nou.

An equally fresh-faced Andres Iniesta came off the bench in the second half for Henrik Larsson but Messi – who had made his La Liga debut just a month prior – watched from the dugout as Ronaldinho and Samuel Eto’o tore Madrid’s backline apart. 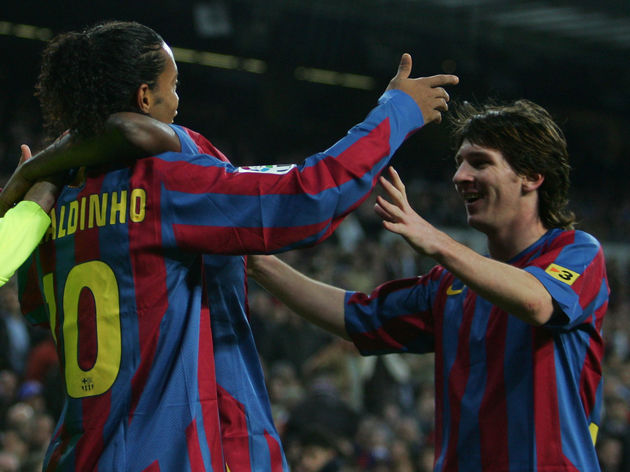 One year later, almost to the day, Messi started in his first Clásico appearance at the Santiago Bernabeu.

Now 18, Messi sparkled on the right of the front three, tormenting a side that featured David Beckham, Zinedine Zidane and Ramos – the latter of whom gave the young Argentine an early shoulder check in what would be the start of many battles to come.

Messi registered the first of his Clásico assists that day, with Eto’o almost pinching the ball off the toe of the youngster as he danced into the 18-yard-box, before poking home for the first in another 3-0 win.

It took another 14 months for the first of Messi’s goals against Real Madrid.

In March 2007, Messi – who had missed the previous season’s fixture through injury – made up for lost time by bagging a magical hat-trick in his first-ever Clásico appearance at Camp Nou.

The 3-3 draw marked the teenage Messi’s coming of age performance in some respects, with his darting, weaving and ruthless finishing amping up the Diego Maradona comparisons all the way to 11.

As noted by Sid Lowe in the ?Guardian the day after the game, 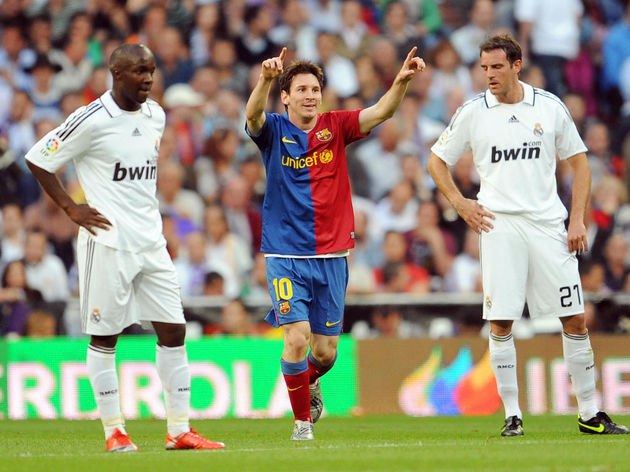 After that hat-trick, the goals continued with regularity. However, the only other hat-trick (to date) came in the barn-burning 2014 La Liga encounter at the Bernabeu, as Messi scored an 84th-minute penalty to complete his treble and seal a 4-3 win.

“It was a plan that Pep Guardiola had come up with especially for this match in order for us to be our most effective,” Messi told ?FourFourTwo in 2017.

In the spring of 2011 – during an ill-tempered but historic period as Guardiola’s Barcelona and Jose Mourinho’s Real Madrid faced off four times in the space of three weeks – Messi again scored twice to decide the Champions League semi-final at the Bernabeu single-handedly.

His magnificent solo effort as he takes the ball of Sergio Busquets’ toe and jets past Lassana Diarra, Ramos, Raul Albiol and Marcelo before sliding past Iker Casillas remains one of the great Champions League goals.

Undoubtedly, the six-time Ballon d’Or winner’s other standout moment in Clásico history came in 2017 as he lashed in a 92nd-minute winner to secure a 3-2 win at the Bernabeu, before celebrating by holding his shirt up and presenting it to the crowd.

Barcelona lost out in La Liga and the Champions League that year with Real Madrid taking both, but Messi had proved a point on an individual level. He was the king of the Clásico. Perhaps curiously, 15 of Messi’s 26 Clásico goals (11 out of 18 in La Liga) have come at the Bernabeu, which has been a happy hunting ground for the world’s best player.

Messi’s apparent preference for playing away against Madrid is shared by the rest of the Barça team with the club’s best results in recent seasons often coming away from home.

Curiously, Messi has scored just once at home against Real Madrid since 2012 (excluding the Supercopa). Perhaps even more bizarrely, the last time he netted in a home league victory in El Clásico? 2008.

Messi told MARCA prior to December’s Clásico: “When we play at the Bernabeu, many more spaces are generated. They attack us more because they have the obligation as the host team and people push them for that.

“At the Camp Nou they play another type of match, sitting a little further back, they are closer together and hit on the counter-attack because they have very fast players up front. At the Bernabeu we play 90 minutes equally. Here the game becomes more locked and is more complicated.” With nothing separating Barça and Real at the top of La Liga and the winter break to follow, Wednesday’s meeting has extra bite – as if it needed it amid the off-field issues involving the rescheduling of the fixture and the threat of further disruption caused by the ‘Tsunami Democràtic’ planned protests

On the pitch, Barcelona also have the chance to overtake Real Madrid in the head-to-head record for the most La Liga wins in Clásico history (currently both teams have 72 wins).

Wednesday promises to be a historic encounter for one reason or another.

It would be unusual if Messi didn’t have a say.

*Statistics sourced from Opta and Transfermarkt