Good afternoon everyone, and welcome back to

Without further ado, I’m Alan Partridge and here are your Player Power Rankings this week. St. Mirren faced Odsonne Edouard’s wrath this week. The Frenchman bagged a goal and an assist in Celtic’s 5-0 win, taking his tally for the season to 27 goals and 19 assists in all competitions. “No offence, Lynn, but your life is technically not worth insuring.”

Is the 2020 version of Timo Werner even worth anything?

He has scored in just two league games since the turn of the year and drew another blank last time out. Yikes. The anti-Werner, Kai Havertz has enjoyed a real glow-up in 2020.

He managed a goal and an assist last time out and has been involved in 12 goals in his last 12 games. That’s what we like to see. “Would you like me to lap dance for you? I want a second series.”

Even though he didn’t score in his last game, Carlos Vinícius has probably done enough to earn himself a new home next season.

But we don’t care about that. If he doesn’t start scoring again, he might not keep his place on the list for much longer. “‘Sunday Bloody Sunday’. What a great song. It really encapsulates the frustration of a Sunday, doesn’t it?”

Sunday was a bad day for ?Romelu Lukaku, whose ?Inter side fell to a 2-0 loss to ?Juventus.

He failed to score against both Juve and Lazio in his last two games, and now Inter are nine points behind in the title race. It’s all gone downhill. “Idea for a programme entitled ‘Yachting Mishaps’ – some funny, some tragic.” Are we even going to get the rest of the second half of the ?Serie A season? 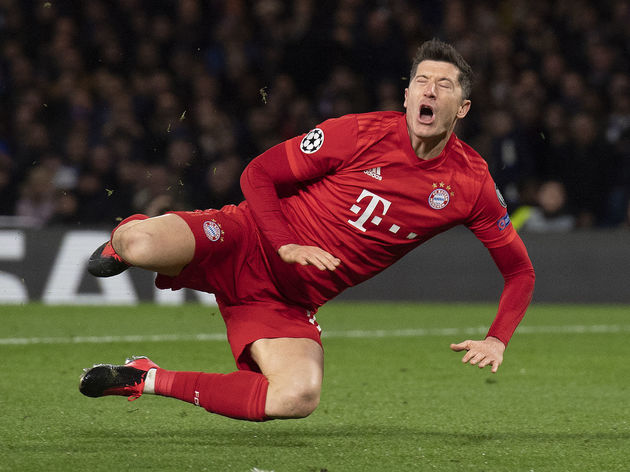 “You’ve got to laugh when you fall off a sofa.”

Maybe falling off a sofa is how Robert Lewandowski injured his leg?

Either way, I hope you’re ready to see him tumble down the power rankings while he’s out. Yep, monkey tennis does not make sense. Do you know what else doesn’t make sense? The fayre is on fire and so is ?Serge Gnabry.

His scoring streak stopped this week, but he made up for it with another assist. Everything he touches turns to goals. “I’d just like to fly a helicopter all around Norfolk. You know, swoop down over a field. Scare a donkey so that it falls into a river. Hover over one of those annoying families that go on holidays on bikes. And shout at them ‘get out of the area!’ and watch them panic!”

Erling Haaland is a crazy hybrid of a helicopter and a tank.

But, he went two games without a goal! Crazy!

He probably shouldn’t be so high on the list still, but that’s what happens when half your competition is banned from playing. “Smell my cheese, you mother!”

He bagged ?Barcelona’s winning goal against Real Sociedad, and that was enough to get them back to the top of ?La Liga because ?Real Madrid clearly hate making life easy. “I’m leaving you, you cow! Sorry, bit of a joke there. Backfired. No, I’m basically saying I’m going to be checking out at the end of the week.”

We got another ?Cristiano Ronaldo assist this week, and you better enjoy it, because it’s the last time we’re going to see him for a while. “Do you know what this bathroom says to me? Aqua. Which is French for water. It’s like being inside an enormous Fox’s Glacier Mint. Which, again, to me is a bonus.”

Having ?Kylian Mbappé in your side is a bonus.

Just the three goals against Lyon this week, taking his total for the season to 30 goals in just 32 games. The standard stuff, really. “I do like that toilet. It’s very futuristic, isn’t it? Very, sort of, high-tech, space age. I can imagine Buck Rogers taking a dump on that. In the twenty-first century. Mind if I… have a go?”

Jadon Sancho is the future of football, and everyone wants a go with him in their team.

He bagged the game-winning assist for ?Borussia Dortmund this week, which isn’t even a surprise anymore. That’s all he does.

Mbappé is coming for top spot, but right now, it’s all Sancho’s.