Week 10. Blimey. This is, as they say, the thick of it. The thick of the season. Stuff is happening, all the time, across Europe, and when it’s not, it’s either Thursday (who cares about the Europa League) or a particularly pesky VAR interruption.

In any case, this has also coincided with what I would call a sort of pivotal moment in politics. That’s right, we’re getting political here at EPPR. But not in that way. Nah, we’ve just teamed up with Armando Iannucci and Jesse Armstrong’s sweary tour de force, ‘The Thick of It’. “Yeah, yeah. Andy Murray, Andy Pandy, f*cking Ghandi have a hand-shandy, whatever, just f*ck off out of my life.”

That is essentially what Inter said to Radja Nainggolan this summer. This Saturday’s thundertw*t of a goal was his response. If you haven’t seen it yet, your existence is pitiful and without meaning and I don’t want to know you. So, you know, watch it. “I’d like to nail him to a tree through the head and watch lice slowly crawl over his body, eating off the flesh in a slow and painful death. But that rather bitter anomaly aside, most of the responses to the Warwick report press cuttings were pretty positive.”

And so went Jorginho’s first season in England. People weren’t happy. But the Italian is quietly reversing public opinion while exuding a greater and greater influence at Stamford Bridge.

He’s certainly not an archetypal Chelsea midfielder, but with more puppeteering performances like the one against Newcastle and he might just be for the years to come. Yes, Jack Grealish has a lot of responsibilities at Aston Villa, but boy does he realish it (lol). Against Brighton, he was everywhere and everything.

Indeed, if we’re talking most impactful players for their clubs in the Premier League, he can’t be far off the Virgil van Dijk vortex of worship. “All events are regional. Everything that happens in the world has to happen somewhere. Do you see? Even JFK’s assassination was a regional event. But it was also very important. Like this factory visit.”

Oh, you think this is about Luis Muriel going to Atalanta? No, no, this is about Atalanta visiting Lazio, because Atalanta are now definitively a bigger club than Lazio. Trust me. They’re the regional folk, while Muriel and co are traversing Europe, going global.

Anyway, the Colombian got another two goals in a cracking game and the Bergamo outfit are still sat in third place. Nice stuff, Luis. Having not scored since April and started the season with a groin injury that seemed to be still affecting him, Arkadiusz Milik surprised some Napoli fans with a return to scoring ways against Hellas Verona. Twin-scoring ways, to be precise.

That 2-0 defeat kept Napoli in fourth place, and left their visitors straggling a point behind AC Milan. AC Milan!!! Hellis Verona, more like. “Tomorrow, from broadsheets to wank rags, I want pages one, two and three to be a profile of Tom looking like a f*cking political colossus. Y’know: Tom meeting the Pope, Tom in an NHS hospital chatting to little, baldie kiddies. I want pages four and five to be a timeline of British politics with me at the centre looking f*cking indispensable and f*cking benign.”

After some bad press following the Wolves defeat and the, err, Bernardo Silva fiasco, Pep Guardiola wanted a no-nonsense three points against Crystal Palace. And he got it, nonsense and all.

One of the better parts of this arty nonsense came from Raheem Sterling, with an assist for the ages. Luckily, a certain David Silva was on hand to salvage it with a no-nonsense wallop of a finish. “I’m sensing a change in management styles. From touchy-feely to smashy-testes.”

No player represented Manchester United’s step up in performance against Liverpool like Marcus Rashford. The recently much-maligned marksman was at his effervescent best, besting Virgil van Dijk on more than one occasion, and providing United with the goal no one thought they could muster.

And yet, even though the above quote might apply to the Red Devils, it remains the case that the below one could resurface at any time: “Do you know 90% of household dust is made of dead human skin? That’s what you are to me.”

Yes, after a period of rest and recuperation, Lionel Messi is back. And he’s back on his mere mortal-humiliating bullsh*t. Now, the Argentine’s performance against Eibar was not a vintage one, but it still showed his complete and utter disdain for all those in his way. 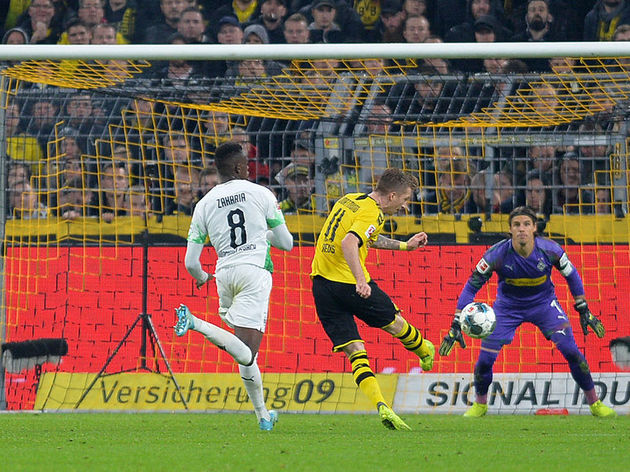 “I think we should use the ‘carrot and stick’ approach. You take a carrot, stick it up his f*ckin arse, followed by the stick, followed by an even bigger, rougher carrot.”

Look, after three successive draws, Borussia Dortmund had to change their approach. Especially for a game as big as the one against league leaders Borussia Monchengladbach.

And so they did, to great effect. They used Gladbach as the carrot and told Marco Reus to eat it. And he did.

Oh, and the carrot from the quote is a different carrot. Just to be clear. “From now on, it’s a proper fight. It’s a pub fight, Motherwell rules. And Tom is gonna get a pint glass in his f*ckin’ eye, and a pool cue up his arse, and another pool cue in his other f*ckin’ eye!”

Yeah, hardman Tomas Koubek brought the fight to Bayern Munich alright, stopping the Bavarians from getting a much-needed victory with a series of staggering saves. “Look, people really like it when you go just a bit early! You know; steely jawed, faraway look in your eyes! Before you get to the point when they’re sitting round in the pub saying ‘Oh, that f*cker’s got to go!’ you surprise them! ‘Blimey, he’s gone! I didn’t expect that! Resigned? You don’t see that much anymore! Old school! Respect! I rather liked the guy! He was hounded out by the f*cking press!’ How about that, eh? What a way to go!” Don’t you ever, EVER call Romelu Lukaku a flat-track bully. He’s so much more than that. And he’s proving that with each passing game under Antonio Conte at Inter.

Big Rom is on a Big Mission. “This is a f*cking joke. Chancellor? He goes into debt every time he passes a sweet shop!”

Despite scoring his 701st career goal (like a kid in a sweet shop), Cristiano Ronaldo stays third. Again, he wasn’t happy. Another week, another goal, NOT ANOTHER TOP SPOT FOR ROBERT LEWANDOWSKI.

I hope our relationship can stay strong through this testing time, Your Royal Highness the Best Goalscorer in Europe. In what could be described as a Norwich yellow, Antoine Griezmann channelled his inner Delia Smith to cook up a stormer at Eibar.

Having heard the disparaging ‘let’s be ‘avin ya’ calls, he played some of the best fursberl of his life, performing a vital role in all three goals, and showing his critics – a certain Leo Messi among them – that he can play the Barça way, that he can be a useful muse to both Messi and Suarez, whilst maintaining a certain goalscoring standard himself.