Alongside several other European heavyweights, Barcelona have been one of the dominant forces in world football in recent history. Someone asks who the best team in the world are? Barça are probably the answer.

At present, they may not be the force of old, but lord oh lord have Barcelona bossed European football over the years. And it’s not just because they’ve had the greatest player of all time on their books for the last 15 years or so. So, what better way to appreciate one of the planet’s greatest football clubs than to read 90min’s definitive A-Z of all things Barcelona-related?

?A is for Eric Abidal The Frenchman was a fan favourite during his six years at the Nou Camp as he won four La Liga titles, two Copa del Reys, and two Champions Leagues. Not a bad haul, Eric.

These days, you can find Eric in the boardroom as the club’s director of football. How long might he last is another issue as it appears a certain Lionel Messi has been left rather upset by his former teammate.

B is for Brazilians 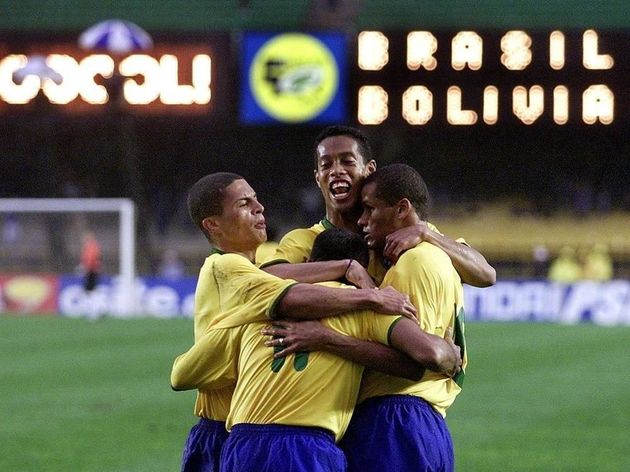 Brazilians. Footballers from Brazil. There have been plenty of them, and a large proportion of the best have played for Barcelona at some point or another.

C is for El Clásico Perhaps the most fiercely contested football rivalry on the planet. Two European giants, Spanish arch-rivals – Barcelona and ?Real Madrid. It never fails to provide a tasty matchup. You’re guaranteed a couple of eye-jabs, as well as the inevitable Sergio Ramos red card.

Can either side boast superiority? Nope, they’ve both won 96 matches apiece.

D is for Ballon d’Or Barça have had six different Ballon d’Or winners on their books over the years. And largely thanks to Mr. Messi, there have been an unrivalled 12 prizes won by players residing at the Camp Nou.

The Argentinian has won six, while Brazilians Ronaldo, Ronaldinho and Rivaldo are joined by Johan Cruyff, Hristo Stoitchkov and Luis Suárez (not that one!) to have won the prize for being the undisputed best player on the planet…or Europe…depending on when they won it.

E is for Samuel Eto’o When this man was in his prime, he was the best striker in the world.

Widely regarded as one of Africa’s greatest ever, Eto’o and Barça struck up quite the relationship. The Cameroonian netted 130 goals across five campaigns, scoring in both the 2006 and 2009 ?Champions League final victories.

F is for FC Barcelona We found a way to get the club’s name in! ‘F’ was going to be Luis Figo, but I have a sense that Barça fans might be able to find it in themselves to forgive me for that. Instead – how about some fun history surrounding ‘Futbol Club Barcelona’!

When were they founded? That would be in 1899 by a certain Joan Gamper. Since that moment, Barça has become the shining light of Catalan culture. Their first official name? ‘Foot-Ball Club Barcelona’. So, it hasn’t changed too much, which is nice.

G is for Pep Guardiola Guardiola resided over quite the team during his four seasons at the Nou Camp. ?La Liga

He was also a decent footballer who remains richly engrained in Barça’s history. He spent 11 seasons in the first-team, winning six league titles and helping Barça to their first European Cup victory in 1992.

H is for Hat-tricks It’s worth having a little look at the hat-tricks that have been recorded over the years. And, of course, ?Messi is at the forefront of this.

Fastest hat-trick – unlucky Messi, it wasn’t you! Pedro scored three times in nine minutes in a match against Getafe back during the 2013/14 season.

I is for Andrés Iniesta This Barça legend spent just the 22 years in Catalonia, progressing through La Masia’s ranks to become a pivotal part of the club’s modern success. He won 35 trophies throughout his illustrious career, including nine La Liga and four Champions League titles.

A couple of notable moments? That goal at Stamford Bridge to take Barça to the Champions League final in 2009, and being applauded by Real Madrid fans at the Bernabeu for a mesmeric performance in 20015.

J is for Johan Cruyff

He turned out to become El Salvador, Catalunya’s pride. Heavily influenced Barcelona’s philosophy, and wrote history both on and off the pitch. A man who is seen as much more than just a man. pic.twitter.com/VifpXC8pFg

Yes, we all know what a wonderful footballer Cruyff was – he inspired Barça to win their first La Liga title in 14 years in 1973. As mentioned earlier, he is one of Barça’s six Ballon d’Or winners.

But, we have to focus our attention on the insurmountable impact he had on world football. For Cruyff, it was all about ‘Total Football’ – a style that has served to shape our modern footballing world.

As a manager, he and Barça set Spanish football alight. His ‘Dream Team’ won four consecutive La Liga titles between 1991-1994, and won the club’s first European trophy in 1992.

K is for Ronald Koeman Another member of Cruyff’s ‘Dream Team’, Koeman remains one of football’s greatest ever centre-backs. It was his goal that landed Barça their 1992 European Cup victory, and as a defender, his goal-scoring prowess was ridiculously impressive.

Free-kicks? Get him on them – he loved to whack 30-yard screamers into the top corner. Penalties? No dramas. Koeman could do it all.

L is for Luis Enrique Enrique is another whose legacy at Barça is hugely impressive, and he remains a proud part of their modern history.

He was a very decent player (and captain!) for them back in his day, and the success he had as their manager was fairly impressive too. At the end of his first full season in charge, Barça sealed the treble, beating Juventus 3-1 in the Champions League final. The following campaign ended in a domestic double. Not bad Luis, not bad at all.

M is for Lionel Messi I mean, where does one start? Well, he’s the best player in the world. Arguably the greatest in history. Winner of six Ballons d’Or, six European Golden Shoes, h

Top scorer in the history of La Liga? Yep, with 438 goals. Most hat-tricks, most goals in a single season throughout Europe (73), and most assists in the league too (181). Chuck in most goals in the calendar year (91) too – in his 767 games for Barça, he’s netted 627 times. Decent player this one.

N is for Nou Camp Barça’s home is the largest stadium in Europe with an impressive capacity of 99,354. And, it has played host to some scintillatingly beautiful moments down the years.

O is for Ownership

As the world’s wealthiest club (in terms of revenue) Barça have the financial firepower to compete for anything, and anyone, the club sees fit.

P is for Puyol & Pique A legendary pairing of Spanish centre-backs. The now-retired Puyol, who appeared in 593 competitive fixtures for Barcelona during his 15 years at the club, was club captain, and only ever pulled on a Barça shirt. Legend indeed.

?Piqué, on the other hand, is still going, and remains among the world’s greatest centre-halves. He, along with his several of Barça teammates, was part of two treble-winning sides in 2009 and 2015. Eight and counting for La Liga titles, three in Europe, and six in the domestic cup. Not bad Gerard, not bad.

Q is for Quique Setién There weren’t a huge selection of competitors for the letter ‘Q’, but it seemed fitting to include Barça’s current boss in here. Because, well, he’s the club’s manager these days.

Setién has only been in charge for a couple of months since he replaced Ernesto Valverde, and it remains to be seen whether the former Real Betis boss is a long-term option for Barça’s managerial position.

R is for Ronaldinho, Ronaldo & Rivaldo 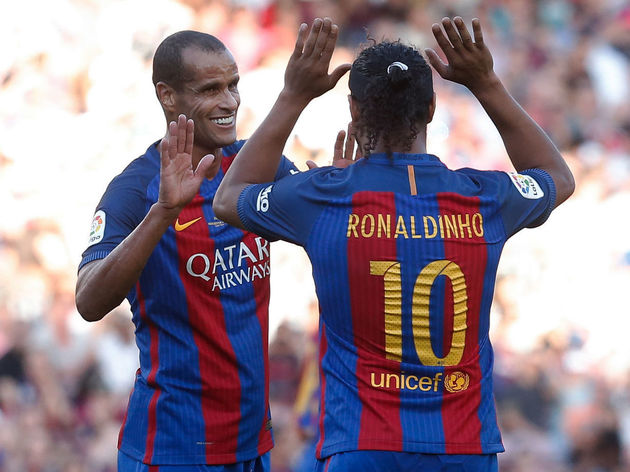 We’ve spoken about Brazilians. We’ve spoken about the Ballon d’Or. And, Barcelona have had a spectacular number of Brazilian superstars to have played for them down the years. They happen to have been quite good, play further up the pitch, and a lot of their names begin with ‘R’.

Let’s talk about FIFA World Player of the Year awards for a second. Barça hold the record for players to have won it when at the Nou Camp, and all of Ronaldo, Ronaldinho, and Rivaldo managed to do so.

A quick glance over each player:

– Ronaldinho was the undisputed best footballer on the planet in 2005.

– Ronaldo – the youngest ever player to have won the FIFA World Player of the Year when at Barça in 1996.

S is for Luis Suárez Not without his controversies, granted, ?Suárez’s Barça career has been nothing short of sensational.

Second season syndrome? At a time when Messi and Ronaldo dominated the individual prizes and the goal-scoring records, Suárez took Barça by storm. 40 league goals and 16 assists (the first player in La Liga history to top both charts), which landed him the Pichichi, and European Golden Shoe – the first player other than Messi or Ronaldo to do so since 2009. Overall, he’s scored 191 times in 270 games. Simply stunning stuff.

T is for Tito Vilanova The late Vilanova was only Barça manager for a period of 45 games. He was Pep Guardiola’s assistant throughout his glittering managerial tenure, but took up his former boss’ mantle after his exit in 2012.

And, in his only full campaign in charge, Barça lost just eight matches, and won the title by a record 15 points.

U is for UEFA Champions League

The most coveted European crown. And, Barça have won it five times in their history, including on four occasions in a nine year period between 2006 and 2015. It’s not quite the 13 titles their rivals Real Madrid can boast, but still, they are right up there, and will feel another European crown is overdue.

V is for Victor Valdés A mammoth in goal for Barça over the years. Valdés was at the club from 2002-2014, making 535 appearances, and pretty much being an undroppable fixture in Barça’s starting XI for all the time he spent at the club. Good stuff Victor.

W is for World Cup Winners

It’s inevitable that one of the world’s best sides boasts a fair number of players to have won the World Cup with their countries. For example, in 2010, there were six starters in Spain’s World Cup winning side.

X is for Xavi Hernandez Barcelona legend. Their record-appearance maker with 767 over a monumental 17-year period, Xavi altered the conversation as far as a central-midfielder was concerned. He is regarded as the greatest ever Spanish footballer, as well as Barça’s greatest, and one of the world’s best-ever. Enough said.

Y is for Youth Team If you’ve stuck with us, we are almost done! ‘Y’ is for young players, and Barcelona have one of the most prestigious youth academies on the planet. ‘La Masia’, which has produced the likes of Messi, Iniesta, Xavi, who in 2010, were the three Ballon d’Or finalists. Not a bad production line.

Z is for Andoni Zubizarreta

He was an excellent keeper for the club, and made 410 appearances. He was then the club’s director of football. That’s about it, apart from his surname beginning with ‘Z’.