?Luis Suarez is undoubtedly one of the great strikers of the past decade. He has been a huge hit at Barcelona since he joined five years ago, scoring goal after goal, winning trophy after trophy and even picking up the Champions League back in 2015.

Weirdly enough though, 2015 was the last time the Uruguayan scored an away Champions League goal for Barça.

Suarez drew a blank again as Barcelona toiled against Dortmund in their mid-week stalemate, and the Four years is a long time in football and a lot of things have happened on planet Earth in the time that he has been trying so desperately to score an away goal in Europe.

Here’s just a quick sample of them.

this represents good and America becoming whole again. We will no longer outsource to other countries. We build factories here in America and create jobs. We will provide jobs for all who are free from prisons as we abolish the 13th amendment. Message sent with love pic.twitter.com/a15WqI8zgu

This was really weird. And random. One of the all time great musical artists – an icon to black people – suddenly became a huge fan of…Donald Trump.

Kanye West went on to state his admiration for the American president regularly over the next few months, and even proceeded to set up a meeting with him, hug him and tell him how much he loved him.

Barack Obama was still in the oval office the last night Suarez found the net on the road.

Oooh yeah, this one is probably going to hurt ?Barca fans. Three back to back Champions League titles to their arch rivals, led by the evergreen Cristiano Ronaldo.

At least they won’t have to worry about Madrid winning another one any time soon.

In these last four years, Lionel Messi has scored 191 goals in all competitions. It’s staggering really. 191. O-N-E H-U-N-D-R-E-D A-N-D N-I-N-E-T-Y O-N-E. Players gain legendary status for scoring that many in a career. He does it in four years. While the first use of the word ‘Brexit’ predates Suarez last away goal (against Roma in September 2015), the family dividing, news dominating sh*tshow wasn’t to fully come until after the Uruguayan’s last strike.

In 2016, 52% of the country voted to leave the European Union. Three years later, we aren’t any closer to knowing what the **** is going on.

After the Copa America final defeat to Chile in 2016, Messi was so devastated, he decided to retire from international football. 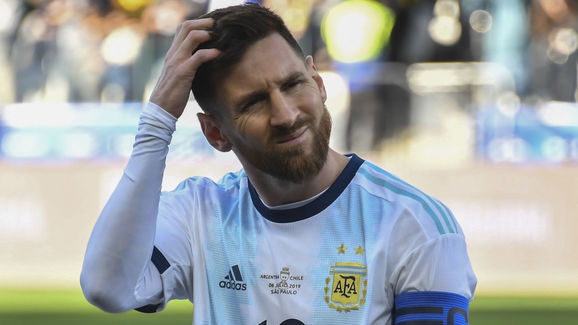 This was a very temporary retirement though, as the Argentinean announced his return soon after. I’m sure he missed the feeling of failing in another major tournament.

Avengers Endgame became the highest grossing film of all time, finally displacing Avatar. It ended up smashing record after record, and a lot of that was down to Robert Downey Jr’s take on Iron Man.

I’m not crying, you are.

To be honest, this one didn’t seem big enough to go on the list. But, you know. It’s just funny.

Our Prime Minister goaded a fellow politician by calling him a, ‘chlorinated chicken’. Need I say more?

Please just score Luis. The world is getting very weird.