It’s the middle of February guys, and you know what that means: Champions League football is back!

But, before we can enjoy the heavyweight clashes of Europe’s greatest competition, there is some scintillating domestic action from across the continent to get your teeth stuck in to first.

With title races heating up across the continent (except for England that is), as well as European qualification to play for, strap yourselves in for another adrenaline-pumping weekend of world-class football.

Let’s take a look at the games you have to watch this weekend (Friday and Monday included). As the reverse fixtures of the ?Premier League’s opening weekend games come around, it’s always a good time to take stock. While the previous encounter finished 0-0, both sides find themselves in very different predicaments to when they met in August.

Leicester’s form may have dipped in recent weeks, but the Foxes are still a shoo-in for the top four, and a win would take them in to second (for a few days at least). Meanwhile, Wolves are knocking on the door of the Champions League places themselves, sitting just six points behind Chelsea in fourth.

More than anything, both Midlands clubs play some swashbuckling stuff under their respective managers, and both teams will be looking to end Valentine’s Day without a broken heart…or a massacre. ?The battle for ?Champions League qualification is wide open in La Liga, with Friday’s clash of titans potentially pivotal in the race for Europe.

Atletico currently sit in fourth, but Valencia (seventh) can leapfrog Diego Simeone’s side with a victory at the Mestalla. Both sides may have one eye on their incredibly difficult Champions League ties midweek, but will also have to prioritise re-entering Europe’s top competition next season.

There may not be a flurry of goals, but the atmosphere and potential ramifications of this one makes it well worth a watch. If you do happen to be alone this Valentine’s Day, you needn’t fear. There is yet another mouthwatering clash on Friday night, with the ?Bundesliga’s most chaotic side Dortmund in action against the resurgent Frankfurt.

The Eagles have won four of their last five matches, scoring five in their demolition of Augsburg last time out. Meanwhile, Dortmund played out a 4-3 thriller against Bayer Leverkusen last Saturday, and still have their eyes firmly fixed on top spot. If you seldom seek out ?Championship football, then this should change all of that.

West Brom moved six points clear at the top of the table midweek, while Forest’s slip-up means they remain just two points off Leeds in the automatic promotion places. Regardless, these are two of the league’s form sides and pressure is ramping up for both of them in their fight for Premier League football. With Quique Setien’s job already under threat, the last thing he needs is a game against a plucky underdog that will cause Barcelona problems.

Getafe have actually built on their near-miraculous form in ?La Liga from last season, and currently sit third in the league table having won their last four games without conceding a goal. With Barça’s injury crisis continually deepening, and their lack of options upfront and in defence, Getafe may be sniffing out a big-time scalp on Saturday afternoon.

This is a must-win game for the Catalan giants, especially at Camp Nou, with Real Madrid three points clear at the summit of La Liga. ?Liverpool have been so good this season that every game they play has become a must-watch.

But to add some extra spice to this one, it’s top vs bottom.

Norwich are seven points away from safety, while the Reds are looking to open up a 25-point gap at the top of the table (more points than the Canaries have). However, Norwich’s surprise win over Manchester City back in September will offer them hope and gives them a slim chance of ending Liverpool’s ‘invincible’ run. 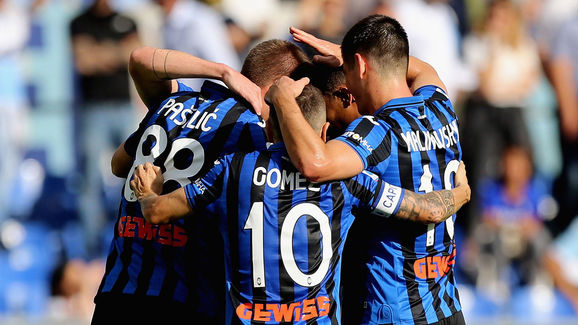 Why wouldn’t you want to watch Atalanta?

Serie A’s top scorers have netted 63 goals this campaign – 17 more than Italian giants Juventus – and can open the gap between themselves and fifth-placed Roma with a win on Saturday. However, this also means a win for the visitors can see the Giallorossi go level on points with Atalanta as they hunt a return to Champions League football.

Considering the teams played out two breathtaking 3-3 draws last season, there is certainly potential for a hell of a lot of action in this crucial clash. Undoubtedly the biggest clash of the weekend, ?Serie A’s title race could take another turn, and potentially twist, this Sunday evening.

Table-toppers Inter travel to Lazio knowing a victory would secure their place atop the league table for another week. However, the hosts are just a point behind Antonio Conte’s side, and could leapfrog the Nerazzurri with a win on home soil.

With two of the division’s top three scorers in action as well, this heavyweight clash won’t likely disappoint goals-wise. Having already met twice this season, Manchester United have enjoyed the bragging rights on both occasions following wins in both the Premier League and Carabao Cup.

United will be hoping to close the gap between themselves and Chelsea to just three points, but a trip to Stamford Bridge is a tricky proposition for any side, let alone a team struggling for consistency.

Either way, both sides’ unpredictability may work in favour of the neutral this Monday night, as nobody truly knows what we’re going to see unravel in London.

Oh and we all get to see more of Bruno Fernandes!