The world is on lockdown, and we’re all lounging around looking for things to do.

Netflix is desperately scraping together a bunch of D-list celebrities to churn out a bang-average original series. But considering how mind-numbing Birdbox was, I would say they’re probably pretty short on material.

But they need only to glance at this week’s football news to identify the real protagonist for their next documentary or thriller.
?

That’s right, Ronaldinho has gone against the grain, getting himself locked up, just as the rest of us are locked down. Vintage Ronaldinho.

But what could the plot be for the Brazilian’s very own Netflix original series? 90min investigates.

Plot – ?Why would a man try to cross a border which requires no documentation with a fake passport? There’s only one logical explanation. Ronaldinho was FRAMED!

Netflix launches a six-part documentary examining the days that led up to their hero’s incarceration, attempting to answer all of the question’s that surround the superstar’s arrest. Who set him up?

Who wants him out of the picture?

Is he really the world’s dumbest criminal?

Why is he still smiling?

The only place to find out, is on Netflix.

Plot – Rodrigo, a prisoner serving a lifetime sentence in one of the toughest prisons in Paraguay, only has one ambition in life, and that burns stronger than anything else. He has never been on the winning side in the annual prison futsal match. The prize? None other than a 16kg piglet.

The closest he came was in 1996, when he decided to shiv five of the opposition, meaning they had to forfeit the match. Unfortunately for Rodrigo, his plan was foiled. 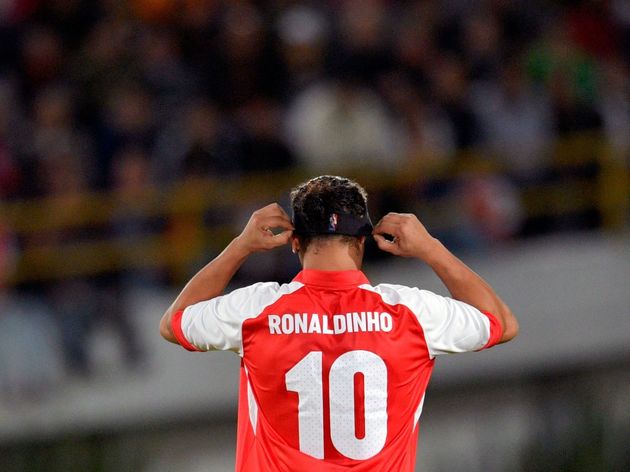 This time, the hard man has a trick up his sleeve. Rodri has several guards in his pocket, and he uses his leverage to orchestrate the arrest of an unsuspecting football icon. Planting fake passports on our soon-to-be trapped protagonist, Ronaldinho is sent to join Rodrigo in the slammer, where he’ll be given the toughest ultimatum in his life: win the piglet, or be fed to the pigs.

Ronny has never played in such a high-stakes fixture in all his years as a professional footballer. Will he bring home the bacon one last time?

Plot – Ronaldinho ?- the master of the flip flap (or elastico, to the more cultured among us) has been thrown into the slammer. The Brazilian is set to spend the rest of his life in this dirty, smelly prison, until he is handed an escape route. The challenge? He must lead his inmates to success in the Paraguay prison flip flop World Cup.

That’s right. Every player must take to the field in flip flops. Handed the number 10 shirt once more, Ronaldinho spearheads the plucky underdogs of

Victory would see our superhero put his chequered past behind him, and get back to his old life as the free spirit we all know and love.

Inside Paraguay’s Toughest Prisons With Ronaldinho

Plot – Ross Kemp had his turn observing the world’s most gruelling and fearsome jail cells – now it’s Ronaldinho’s time. The ?ex-Barcelona star’s journey behind bars is followed by a brave camera crew, who document life in Paraguay’s toughest prison. Ronaldinho’s first setback comes when a brutish inmate asks him ‘what the f**k are you smiling at?’ and, having massively misread the room, our hero replies ‘You, my friend!’ But one trip to the prison doctor and three chipped teeth later, Ronaldinho is back amongst the thick of it.

The documentary portrays the former Milan man’s gruelling spell in prison, as he tries to navigate towards survival, meeting some of Paraguay’s most feared men. But always with a smile worth of prime-time television.

Hold on to your popcorn, it’s gonna be a bumpy ride.

?Plot – A light-hearted 20-minute show involving Ronaldinho and his brother, who have recently been arrested for use fake passports! Haha, classic. The pair are chucked into a Paraguayan prison, and Ronaldinho is forced to bunk with the scariest man in the building, Enrico.

Luckily for our protagonist, Enrico turns out to be a bit of a softy at heart, and the pair bond over their joint-enthusiasm for one of Brazil’s favourite sweets, Plot – Ronaldinho has always been ?known for his mind-blowing skills and his incomparable ability with his feet. But now behind bars, there is little use for the Brazilian magician. That is, until the daily clean-up comes around.

The prison guards are astounded by his talent to chip any piece of waste into the rubbish bin, and they realise they may have found a purpose for the fallen star after all. Ronaldinho becomes revitalised by his new calling in life, and he adopts the nickname ‘the Brazilian Bin-man’ for his impeccable cleaning skills. 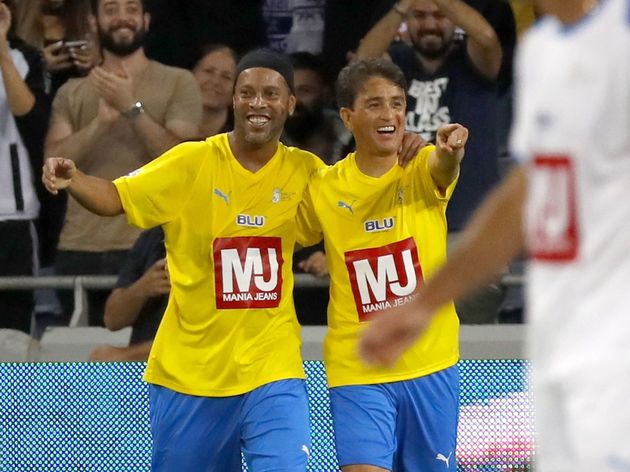 His jail looks destined to win the coveted ‘Pristine Paraguayan Prison’ award, until Ronaldinho is sabotaged by an opposing cleaner, who breaks the star’s right foot.

The World Cup winner has achieved plenty in his time, but now he faces his most challenging test of all. Cone single month

It’s time for Ronaldinho to take out the trash.

Plot – ?Ronaldinho is a man with many talents. Well, football, mainly. But after retiring from the sport, the Brazilian had only one dream: to work for his nation’s CIA. An undercover cop, Ronaldinho has been handed his most dangerous task yet – infiltrating Antonio Padera and his crew – the deadliest gang in Paraguay. Going undercover as a Paraguayan citizen, Ronaldinho is arrested and sent to