It’s always difficult to assess a team’s chances after several months away from competitive action and a recent tour of Asia, the United States or any other far-off reaches of the globe. Nevertheless, we always marvel at the sight of an underdog toppling one of the big boys, even if it’s the first fixture of the new campaign. Athletic Bilbao’s ?late victory over Barcelona on Friday night certainly caught the attention of football lovers the world over, whilst Bayern Munich’s ?captivating 2-2 draw with Hertha Berlin was a result few saw coming.

However, those are not the greatest shocks to have occurred on matchday one. Here, we take a look at seven of the biggest opening day upsets from across the continent. ?Die Roten’s record for round 1 fixtures is far superior to any other ?Bundesliga club, with a 6-0 crushing of Werder Bremen in 2016 the joint-largest first game victory since the league’s foundation in 1963.

Fittingly, they were also involved in the only other 6-0 win in a German curtain-raiser. Unfortunately for the Bavarians, they were on the receiving end as Offenbacher Kickers humiliated the reigning European champions in 1974.

Karl-Heinz Rummenigge was given a top-flight debut he would never forget on that late-August afternoon, the legendary forward ghosting through the contest as the illustrious Bayern Munich were brought to their knees. 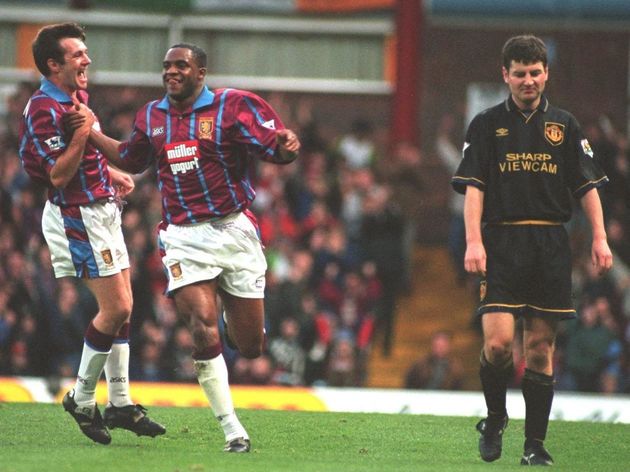 Alan Hansen’s reputation as a pundit went south after ?Manchester United secured a league and cup double at the end of the 1995/96 season. After the Red Devils had lost their first ?Premier League match of the year 3-1 to ?Aston Villa, the Scot made a memorable comment about youth.

Hansen had claimed that (as quoted by ?BBC): “You can’t win anything with kids”.

In his defence, United’s frailties had just been ruthlessly exposed by a team that finished one place above the relegation zone just three months prior and there were glaring questions about team personnel.

How was the former ?Liverpool defender to know the fame and glory that Sir Alex Ferguson’s young recruits would garner in the coming years? David Beckham, Gary Neville and Paul Scholes were mere mortals back then. Semi final exits in both the ?Champions League and Copa del Rey, combined with a third spot ?La Liga, had seen Frank Rijkaard vacate his position as ?Barcelona manager in the summer of 2008.

La Blaugrana decided to gamble and gave the reins to Pep Guardiola, who had been coaching in the Having been exiled from the top division of English football since the late 1960s, Blackpool made an unexpected return to the promised land in 2010, courtesy of an enthralling 3-2 triumph over ?Cardiff City in the ?Championship playoff final.

The Tangerines had been favourites to drop down to the third-tier that season and they were once again marked down as relegation fodder when they began their maiden Premier League campaign.

Though they would ultimately succumb and slip through the trap door, Ian Holloway’s fearless seasiders could always be relied upon for fun. Their reputation as the league’s great entertainers started with an attention-grabbing 4-0 victory away to ?Wigan Athletic, Marlon Harewood hitting a brace as Blackpool stole second position in the table. Brendan Rodgers had worked wonders at ?Swansea City, instilling grit as well as a slick style-of-play to keep the Welshmen’s heads above water in their first season since gaining promotion to the Premier League.

So impressive was Rodgers’ performance in the dugout, that the mighty Liverpool lured him north to Anfield for the 2012/13 campaign. There were serious issues with the club at the point in time, however, and the Northern Irishman was given a baptism of fire at the Hawthorns.

Still getting to grips with his squad, Rodgers helplessly watched on as ?West Bromwich Albion tore them to shreds with a convincing display on opening day. Four Scudetti had been added to ?Juventus’ enormous trophy cabinet in the space of four years. The Old Lady had fallen agonisingly short of collecting their third European Cup as they lost 3-1 to Barcelona in May. They had a team packed with household names.

None of that mattered when the Bianconeri kicked off their challenge for a fifth successive ?Serie A title at home to Udinese in 2015, a side who had come 16th the year prior. Cyril Thereau got the winner as the contest drew to a close, Paul Pogba and co left speechless as the striker coolly slotted home a late volley. The Championship is notoriously difficult to navigate. Even so, it was a jolt to the system to see the three sides relegated from last year’s Premier League – ?Fulham, Cardiff and ?Huddersfield Town – all fall to defeat in Round 1.

Jan Siewert was the first manager to pay the price for an underwhelming starts as his spell as Huddersfield boss came to an untimely end on Friday. The Cottagers and Bluebirds both bounced back from their losses, but Town went down once again.