It just had to be Diego Maradona at the top of this list.

The Argentine was a unique talent who spent years mystifying defenders with his quick feet and outrageous dribbling, and to this day we have only seen a few players who have come close to matching his legacy.

You could probably list 1,000 of his greatest moments, but here are six which really stand out from the rest.

His Famous Nutmeg on His Debut

Maradona was just 15 years and 355 days old when he made his professional debut for Argentinos Juniors in 1976 – setting the record for the youngest player in Argentinian history – and he wasted little time making a name for himself.

Having been told by coach Juan Carlos Montes to ‘go out and nutmeg someone’, Maradona did exactly that. He slid the ball through defender

Earning a Standing Ovation at the Bernabéu

Maradona’s spell with ?Barcelona often gets swept under the rug. Sure, it wasn’t as amazing as the rest of his career, but he still managed to become the first man to receive a standing ovation from ?Real Madrid fans at the Santiago Bernabéu.

In June 1983, Maradona scored the most Maradona goal you’re ever likely to see. Not only did he dribble the ball past the Real goalkeeper, but he then sat a retreating defender down on the turf for no reason whatsoever before tapping the ball into an empty net.

It was the defining moment of the game for Maradona, who left the field to a ludicrously rare standing ovation from Real fans – something they would not do until 22 years later with Ronaldinho. They didn’t want to, but Real recognised they were witnessing something special.

Scoring the Goal of the Century

Diego Maradona leaves a trail of England players in his wake as he goes on an incredible run to score one of the greatest goals of all time. pic.twitter.com/eteoxRfDG7

In the quarter-final of the 1986 World Cup, Maradona bagged both of Argentina’s goals in a 2-1 win over England. Both those strikes would make the headlines, but for hugely differing reasons.

His second, which later became known as the ‘Goal of the Century’, saw Maradona pick the ball up in his own half, weave past the entire population of England (including goalkeeper Peter Shilton) before firing into an empty net. He was on a completely different level to the rest of the competition.

That goal came four minutes after a certain ‘header’ which sent shockwaves around the world. Yes, he may have used his hand, but it spoke volumes of his confidence that he even felt he could get away with it. 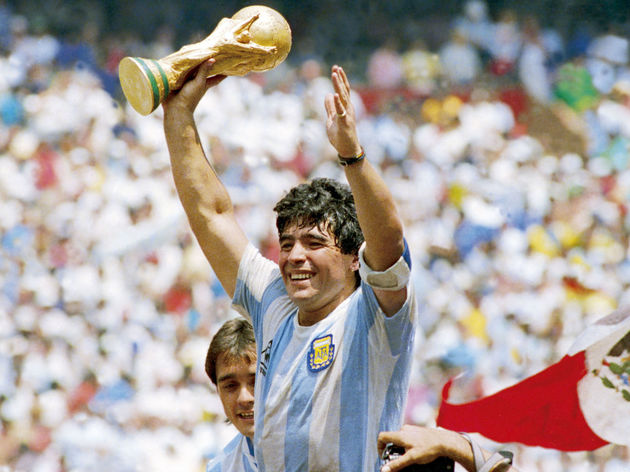 It was an eventful tournament for Maradona. Not only had he already proven he was the best in the world, but he backed up his case even more by leading Argentina to World Cup glory. ?Lionel Messi could never.

In the 1980s in Italy, it was all about ?Juventus and ?AC Milan. No other team came close, but that was until Maradona took his talents to ?Napoli.

Fresh off the back of that World Cup triumph, Maradona led the Partenopei to an incredible league and cup double in 1987, including a stunning 15-game winning streak which saw the Argentine tear apart defence after defence.

Napoli fans held funerals for their rival clubs, announcing the dawn of a new era by painting murals of Maradona all over the city. His time was now.

The two Milan sides had regained control of Italian football in the late 80s, but Maradona wasn’t having it. He made sure the world knew who was the dominant force when his Napoli side met AC Milan in October 1989.

Maradona set up the first with a perfect cross, before a great free kick created the second, but it was his goal which stole the show. He raced through on goal, left the goalkeeper on his backside and chipped the ball perfectly into the net to seal a huge 3-0 win.

He went on to bag a brace in a 3-1 win over Juventus late in the season which effectively sealed Napoli’s second league title, and they wouldn’t have done it without Maradona.