Ronaldinho. The magician. The entertainer. The elastico master.

One of the greatest talents to have ever graced our football pitches, the Brazilian superstar lit up the biggest stages and put a smile on the face of just about everybody who witnessed his displays.

Ronaldinho spent the peak of his career at Camp Nou, where he mesmerised Barcelona supporters for five years, and brought title glory back to Catalonia. But the creative forward also enjoyed some of his best highlights outside of La Liga.

Here is a look back at some of his greatest moments.

There’s no love lost between Real Madrid and Barcelona, and the two Spanish giants are not in the habit of handing out compliments to their arch rivals – the Bernabeu faithful rarely applaud their own players. So what would it take for the ?Madrid fans to openly acknowledge the brilliance of an opposing star? ?Well, in November 2005, we found out. Ronaldinho led Barça to an incredible 3-0 win in Madrid, and the Brazilian sensation delivered one of the greatest individual performances of skill and creativity that the game has ever seen.

For both goals in Ronaldinho’s brace, the winger picked up the ball on the left-hand side and sprinted at his marker – a certain Sergio Ramos – and then breezed past one of the greatest defenders in the game as if he wasn’t there.

The two strikes were pieces of art, and the Bernabeu recognised the genius that they had been subjected to, by awarding their enemy with a standing ovation. Touching stuff.

?Did he mean it? Was it a fluke? Who cares? We all remember Ronaldinho’s long-range looping free-kick, which caught England goalkeeper David Seaman off guard and somehow found its way into the top corner of the net. The Brazilian magician broke all English hearts on that day, and he would go on to lift the prestigious World Cup trophy in 2002, helping his nation claim bragging rights for a record fifth time. It was the peak moment in international football that he thoroughly deserved.

He definitely meant it, anyway.

When a Brazilian footballer leaves his home nation to conquer Europe, he seldom returns to his motherland until he is well past his best. Well, Ronaldinho was forced out of Barcelona to make room for some kid called Lionel Messi (who?) and after a spell in Italy with ?Milan, our smily protagonist returned to his South American roots. And with some success, too. After a stint at Flamengo, Ronaldinho joined Atletico Mineiro, and guided them to Copa Libertadores qualification in his first campaign. The next season, they only went and won the bloody thing – for the first time in their history, too!

The Brazilian star scored four goals and provided seven assists during their dramatic cup run, which saw them overturn two-goal deficits in the first leg of the semi-final and final. Our main man was honoured for his achievements by scooping the award for Best South American player in 2013.

?It’s hard to imagine, given all of Messi’s magic over the 15 years or so, but once upon a time, Barcelona were a team that was struggling to lift the Champions League trophy. But with Ronaldinho at the peak of his powers, they looked destined to break their barren run. 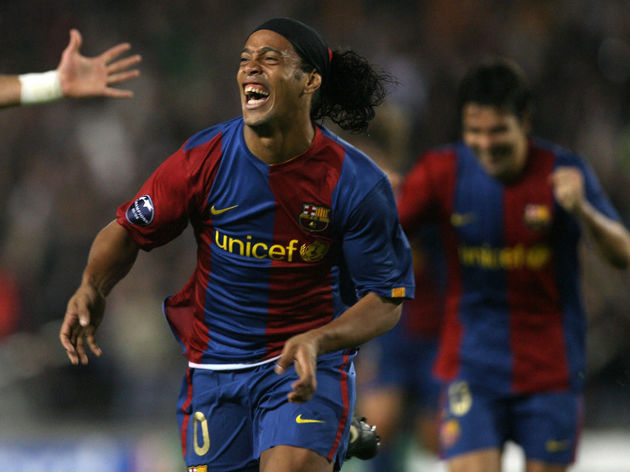 And they did. In 2006, Barcelona ended a 14-year wait for European success by beating Arsenal 2-1 in a dramatic final. Ronaldinho was at the heart of their journey, and he scored a superb goal against Chelsea in the round of 16, showing incredible strength to bounce off a challenge, beat two men and lash a vicious strike beyond Petr Cech.

It was a perfect demonstration of what Ronaldinho is all about: quick feet, lightning pace and devastating power. and

A true legend of the game.