?Social media has become a big part of people’s lives over the past decade, with fans constantly scanning their mobile phones to see what their favourite celebrities are doing.

One of the biggest platforms is Instagram, where athletes regularly post pictures and videos of themselves in action. So, who attracts the biggest fanbase?

90min has the answer. Here is a list of the 30 athletes whose accounts currently have the largest following, via ?Trackalytics The ?Arsenal defender just makes the cut. Having played for some of the biggest clubs across Europe such as Chelsea and PSG, Luiz ?has become a popular figure in the sport along the way. Next up is another Arsenal player. The World Cup winner divides opinion among fans, with some bemoaning his lack of consistency. Yet he remains a classy playmaker at his best and his willingness to voice his opinion off the ?pitch has ensured that fans have remained loyal to him. 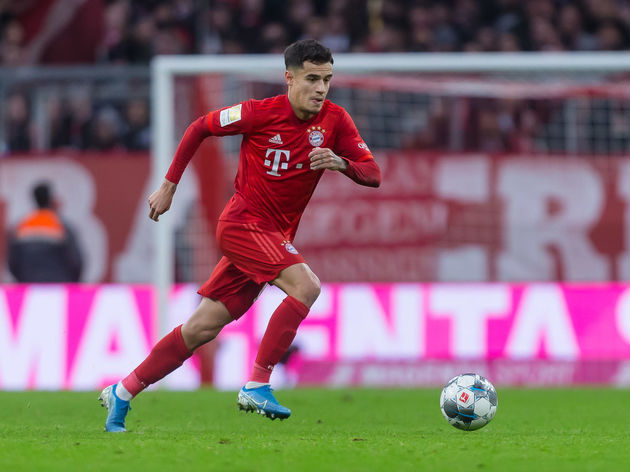 Coutinho has featured in four of the ‘big five’ leagues in Europe and currently plies his trade at ?Bayern Munich. After a difficult time at ?Barcelona, the midfielder has shown glimpses of his best form since moving to Germany. Mayweather was involved in some of the biggest fights in history during the 2010s, taking on the likes of Manny Pacquiao and Conor McGregor. He finished his career with a perfect record of 50-0 but has claimed he will make a return to the ring in 2020, which is likely to increase his following even further.? Kroos has already had an illustrious career, playing for Bayern Munich and ?Real Madrid, also winning the World Cup with Germany. Having only just turned 30 he is likely to run the midfield in the Spanish capital for a few more seasons yet. One of the best to ever grace the sport, Zidane has transitioned into a fine manager at Real Madrid. The Frenchman won three Champions League titles during his first spell in charge, and returned to the helm last year in an attempt to halt Barcelona’s recent domestic dominance. Hazard swapped London for Madrid last summer as he finally got his move to his dream club. The Belgian winger endured a tough start to life in Spain, but has shown in recent games that he is beginning to settle and is ready to replicate the form that saw him shine at Chelsea. Curry has become a household name in recent years following his success with the Golden State Warriors. The Ohio-born point guard has won three NBA Championships and been named the NBA Most Valuable Player (MVP) twice. The French forward made the controversial move from Atletico Madrid Alves established himself as one of the finest full backs of the modern era during his days at Barcelona, Juventus and PSG. Now back in his homeland of Brazil with Sao Paulo, Alves still attracts plenty of attention on his social media platforms. Benzema moved to Real Madrid in 2009 and remains the club’s undisputed first choice striker. With Cristiano Ronaldo joining Juventus in 2018, Benzema has maintained his remarkable consistency in front of goal, producing some eye-catching displays. The diminutive midfielder was a vital part of a golden era for Barcelona and Spain. With four Champions Leagues, two European Championships and a World Cup to his name, Iniesta’s place in history is already sealed. Now playing in Japan with Vissel Kobe, he won another piece of silverware recently, helping the side to the 2019 Emperor’s Cup. The Irish southpaw shot to fame in the UFC, becoming a two-weight world champion with the company. He showed his cross-over appeal by competing in a boxing match with Floyd Mayweather in 2017. Despite losing that fight, McGregor’s popularity has only increased, making him the most followed combat sports star on the list. Dybala had a difficult 2018/19 season, struggling to cement his spot in the Juventus side under Massimiliano Allegri. However, following the arrival of Maurizio Sarri, he has returned to his best form, showing why he is still one of the most talented players in European football today.

Having arrived on Merseyside in 2017, Salah has become a key cog in Liverpool’s seemingly unstoppable machine. He scored the opening goal in their Champions League final win against Tottenham in 2019 ?and looks set to earn his first Premier League winner’s medal in May. Perhaps a player opposition fans can’t stand but one that Real Madrid supporters have come to adore. Los Blancos’ captain is a four-time Champions League winner, also claiming two European Championships and the 2010 World Cup to secure his status as one of the best centre backs of his generation. Another player who is not universally popular, yet fans can’t seem to take their eyes off him. Suarez rose to prominence with Liverpool, almost guiding them to the Premier League title in 2014. A big-money move to Barcelona followed and he has since established himself as one of the most lethal strikers across Europe. It is amazing to think that Mbappe is still only 21 years of age. He has already won a World Cup, along with three French titles. His potential is scary, but being on the same team as him probably makes the forward a little less scary. Pogba has received criticism in recent years over his social media presence, but there is no doubting that he has a loyal set of supporters. A World Cup winner, the 26-year-old also won four Italian titles with Juventus between 2012 and 2016. Never one to keep his opinions to himself, it is no surprise that Ibrahimovic features on this list. He is a very talented player and he wants to make sure that you know it. Now back at Milan, the Swedish forward remains a quality operator. The Welsh winger has had a mixed time at Real Madrid, winning four Champions Leagues in among a number of frustrating injury setbacks. Bale is now into his seventh season at the club and is still trying to win over Zinedine Zidane, having struggled to become a regular.

?The Brazilian left back often gives the impression that he does not take himself too seriously and that has attracted a high number of admiring fans. He has been at Real Madrid since 2007, and he is still successfully fighting off competition for his place at the age of 31. Rodriguez achieved worldwide fame at the 2014 World Cup when he won the Golden Boot. A move to Real Madrid One of the best batsmen of the modern era, Kohli is worshipped in his homeland. Following in the footsteps of the legendary Sachin Tendulkar, Kohli is a joy to watch with the bat in his hands, using skill and power to consistently lead his country to victory. A truly remarkable player. Ronaldinho won the 2002 World Cup with Brazil, scoring a famous free-kick against England in the quarter-finals, before going on to dazzle at Barcelona. Widely recognised as the best player in the world during the mid 2000s, the retired superstar is still adored by football fans all over the world. Into the top five, and we have our highest-placed non-footballer. Of course it is the man affectionately known as ‘The King’. James has won three NBA Championships, two Olympic gold medals and four Most Valuable Player (MVP) awards during his glittering career. He may have retired back in 2013, but fans still can’t seem to get enough of David Beckham. The 44-year-old established himself as one of the finest crossers of the ball while at Manchester United and Real Madrid, also winning 115 caps for England, making him the third most-capped male player in the country’s history. Neymar makes the top three having starred for both Barcelona Messi has to settle for second place on this occasion. Arguably the greatest player to ever lace a pair of boots, the Argentine forward has lit up our screens for well over a decade. A six-time Ballon d’Or winner, there is very little that he has not achieved in the game already and he has shown no signs of slowing down just yet. The Ronaldo-Messi debate is one that will wrangle on for years to come, ?but for this particularly list Ronaldo wins handily. The Portuguese star has won league titles in England, Spain and Italy, as well as five Champions Leagues. He is also just one goal short of 100 goals for Portugal, making him one of the true greats of the game.