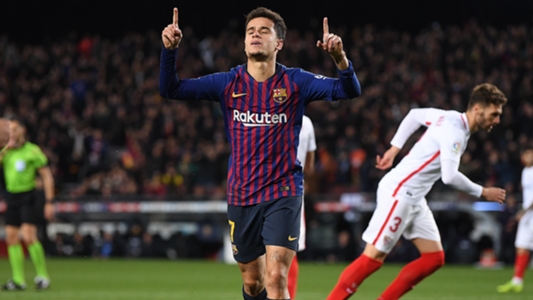 Coutinho netted twice as Barca thrashed Sevilla 6-1 on Wednesday to claim a 6-3 aggregate success in the Copa del Rey quarter-finals.

The 26-year-old has been questioned this season, but converted an early penalty – given to him by Lionel Messi – before adding another in the second half.

Valverde praised Coutinho and said he hoped that would give the attacker the boost he needed.

“Leo has given it to him to take and he has taken a great responsibility and made it 1-0,” Valverde said.

“I hope the success gives him more confidence.”

Coutinho extended his thanks to Messi after the game for allowing him to step up to the spot.

Barca looked in trouble in the tie, but Coutinho’s double and goals from Ivan Rakitic, Sergi Roberto, Luis Suarez and Messi saw them seal a comeback win.

Valverde said it showed his team, who are top of La Liga, could step up when needed.

“The best thing is that we have security and we confirm that we are a team that when we have to take a step forward, we do it,” he said.

Messi meanwhile stressed the victory showed the Catalans are a club that would never throw away any competition.

Barcelona are next in action with a La Liga clash at home to Valencia on Saturday.