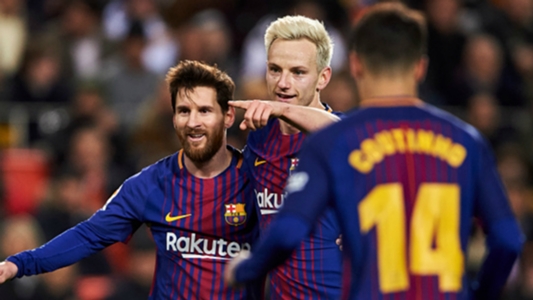 Goals from Philippe Coutinho and Ivan Rakitic saw Barca to a 2-0 win on Thursday as the cup holders advanced 3-0 on aggregate.

The victory ensured Barca progressed to the Copa del Rey final for a fifth year in a row and Valverde heaped praise on his team ahead of the final against Sevilla.

“We faced a team who were very motivated with a city behind them,” Valverde said afterward.

“In the first leg, Valencia didn’t let us score many, in the second we have dominated despite them having good chances, but we deserve to progress.

“We dominated the first game but weren’t clinical, today they threatened on the counter, we played our cards.

“I would have preferred to suffer a lot less and have everything in front of us before, Valencia were very dangerous on the counter and created problems with good players.

“The move where they hit the post could have put them through.”

Coutinho was named among the substitutes at Mestalla as Valverde preferred Andre Gomes in midfield.

But Coutinho – a €160 million signing from Liverpool last month – came off the bench to score his first goal for Barcelona.

“I saw the change [Coutinho replacing Gomes] clearly, we had to move things up,” Valverde added.

“Andre was helping us with strength but we needed more going forward and to do something with the domination we had.

“I normally wait to make changes, but this time I saw it clearly.”