If the rumours are to be believed, then Roberto Martinez is in line to land the top job at Barcelona this summer.

Ernesto Valverde’s tenure is looking increasingly untenable and Barcelona are looking to head in a new direction – with Martinez said to be leading the way.

If Martinez does land the job then he’ll have plenty of work to do to ensure that ?Barcelona return to the heights of European football. Luckily enough, he has a whole host of former players who would fit in perfectly at the Nou Camp next season.

Here’s a (not entirely serious) look at how Barcelona could look under Martinez next season. So good Martinez signed him twice for ?Wigan and then ?Everton, Joel Robles is the obvious candidate to line up between the sticks for Barcelona next season.

Okay, so he’s proven that he isn’t actually *that* good, but have you seen the sheer size of the lad? He’s almost twice as big as Marc-Andre ter Stegen and for that reason alone he should take the number one jersey away from the German with relative ease.

Oh, and he’s 28 years old which, as everyone knows, means that he is about the enter the peak of his career, PLUS, he’s only played five league games in 2018/19 which means that he’ll be as fresh as he’s ever been. Barcelona’s problems on the European stage all started when they got rid of Dani Alves. The obvious solution? Bring Emmerson Boyce out of retirement…of course.

Boyce may have had the turning circle of a freight ship and about as much agility as Emile Heskey on roller skates, but boy did he know how to make a tackle.

That’s exactly what Barcelona need right now. Someone who won’t bother venturing forward and playing out the back. Someone’s who will just lump seven bells out of everyone he sees. A cost-effective, no nonsense choice who should even be in the running for the captain’s armband. The whole ‘signing players from your former club’ trope did get a little bit excessive when Martinez snapped up Antolin Alcaraz from Wigan.

Sounding like the pro-evo version of the Californian prison, Alcaraz was pretty tidy for Wigan, dreadful for Everton and now he’s apparently playing for the mighty Olimpia in his native Paraguay.

Transfermarkt value him at a whopping £180,000, so Martinez could probably pay for the 36-year-old himself if he was so inclined. Gerard Pique is alright, but is he really anything compared to World Cup semi-finalist Dedryck Boyata? I think not.

Boyata may have already agreed to join Hertha Berlin on a free this summer, but that shouldn’t stop Martinez, particularly as Boyata has already demonstrated that he is willing to throw his toys out of the pram to secure a move – even if he didn’t actually succeed in doing that last summer.

Martinez took the seemingly strange decision to take Boyata to the World Cup last summer and he actually played in all three of Belgium’s group stage matches ahead of Vincent Kompany – his quality is therefore undeniable. ?A tough toss-up between Jean Beausejour and Roger Espinoza, but the former should get the nod to represent Barcelona based on the fact that he comes from Chile, who are better at football than Espinoza’s Honduras.

To be fair, Espinoza isn’t even a left-back, but he did play there in the 2013 FA Cup final so Martinez may still be considering him as a potential option. However, if he was a sensible man, he’d be going all out to drag Beausejour away from the obscurity of life with ?James McCarthy deserves a break. After all, he has only able to make one appearance since January 2018 after fracturing his tibia against West Brom.

The Irish midfielder has made an equal number of appearances for both Wigan and Everton – 133 – so it only seems right that Martinez completes the trilogy by handing him 133 appearances for the Blaugrana on the way to unprecedented European dominance.

He’s only got one year left on his current deal so he’ll be a very affordable option if Martinez is looking to strengthen his midfield options. Maybe Ben Watson would be better suited coming off the bench to bag the winner in next season’s Champions League final, but it would be hard for Martinez to deny him a start when you consider their history together.

Did I mention that he scored the winning goal in the FA Cup final? Now we’re talking. A creative midfielder with an eye for a pass who grew up playing in the Barcelona academy (before playing for Swansea, Wigan, Sunderland and Blackburn)? Sign him up right this second.

Gomez was the most talented individual in Wigan’s FA Cup winning side and he has now disappeared into the obscurity of the Cypriot league. Philippe Coutinho has failed to achieve basically anything since joining the club, so Gomez has nothing to live up to. 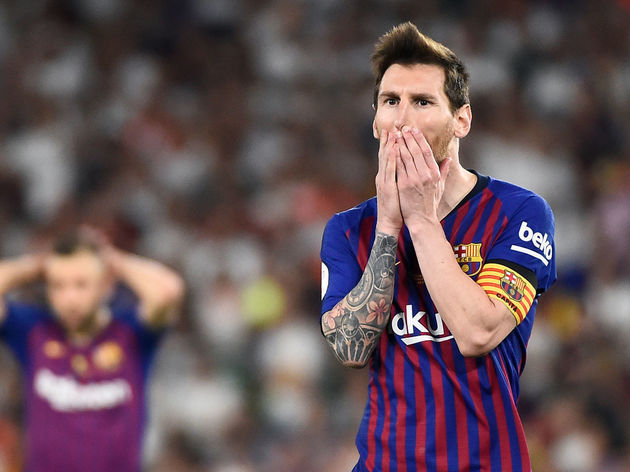 Martinez isn’t that stupid. Callum Mcmanaman is good, but he’s not that good.

?Lionel Messi should alright for a few more years. ?When Adnan Januzaj was named in Belgium’s World Cup squad, the world laughed. No one was laughing when the former Manchester United wonderkid bent a sensational effort into the top corner against England in a completely meaningless group stage game though, were they?

Martinez clearly sees something in Januzaj that no one else does, which explains why he keeps being called up to represent Belgium when he does practically nothing for Real Sociedad.

Get rid of ?Ousmane Dembele and bring in Januzaj, Roberto. You know you want to. The final man to have played under Martinez at both Wigan and Everton, Arouna Kone is the only individual that could possibly lead the line for Barcelona next season.

In what should be a surprise to absolutely no one, Kone is currently plying his trade in Turkey and is practically crying out for a move back into the big leagues after plundering 11 goals in 27 appearances in 2018/19.

Barcelona did sign Kevin Price Boateng in January, so they would invariably be getting an upgrade if they decide to bring Kone over to the Nou Camp.