Former Barcelona treble-winner Enrique was absent from the sidelines for La Roja’s last three matches against Malta, the Faroe Islands and Sweden for personal reasons, and the Spanish football federation has now officially announced in a press conference that he has permanently left the post.

Enrique is succeeded by his long-time assistant Robert – who also filled in the three recent games, winning all three. While he won’t take charge of his first game as permanent Spain manager until September, Robert’s confirmation makes him Here are five things to know about the new man in the dugout for La Roja. Like his predecessor and former boss, Robert is Catalan, born in Barcelona in 1977, later studying International Trade at the University of Barcelona before moving full time into football coaching.

He began his management career in Catalonia too with Penya Blaugrana Collblanc in 2003, before spells with other regional sides

He Wasn’t a Player But He Started Coaching Young

Although never a professional player, Robert started coaching at just 14.

Now 41, he is also Spain’s youngest manager for 71 years as pointed out on Twitter by the Spanish Football Podcast. 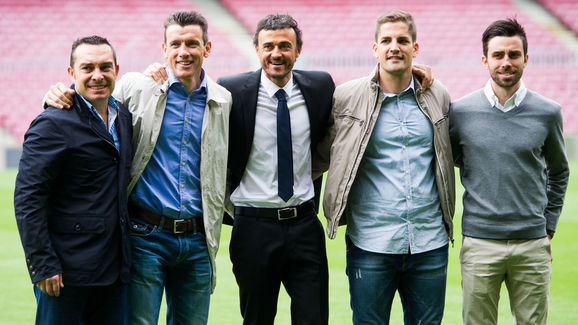 Robert’s relationship with Luis Enrique began when they worked together at Barcelona B under technical secretary Txiki Begiristain. Since then, the two have been ‘inseparable’ (except for one season at Celta) as ??Mundo Deportivo put it.

Enrique later took the coach to AS Roma, Celta Vigo and then back to the Barça first team in 2014.

During the previous round of Spain games, Robert described his boss’ absence as like ‘losing your star number 10’.

His Role So Far While he managed earlier in his career at a number of small clubs, his role for the last decade or so has mainly been in the background focussed on analysis and scouting.

One of the key lieutenants for Enrique during Barça’s treble-winning 2014/15 season, Robert is renowned as a pioneer of using video analysis and other technology in pre-match preparation. He is also a meticulous scout, who knows his opposition inside out and has been consigliere to Enrique for nine years.

Adding to his football nerd credentials, he has even written a book, ?My Recipe of the 4-4-2, which features a foreword from, you guessed it, Luis Enrique.

Nobody Is Safe (Especially De Gea) Listening to his recent comments, it seems that Robert is not going to be overawed by the big names and personalities under his command and has insisted that nobody has a fixed place in the squad.

Speaking back in May ahead of the matches against Sweden and Faroe Islands, ?Robert said: