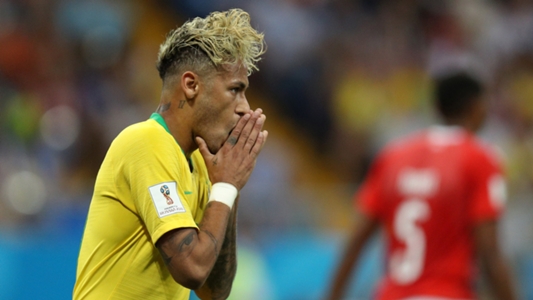 Philippe Coutinho is not worried about Neymar after the Brazil star limped out of training with an ankle problem in Sochi on Tuesday.

Neymar, who sat out Monday’s session, suddenly hobbled off the pitch in a worrying sight for Brazil ahead of their crucial World Cup Group E match against Costa Rica on Friday.

Brazil announced Neymar was feeling the effects of a sore ankle after he was fouled 10 times in the surprise 1-1 draw with Switzerland on matchday one.

Coutinho, however, played down any concerns over team-mate Neymar heading into the St Petersburg showdown.

“I saw the same thing you saw. I haven’t talked to him,” Coutinho told reporters when asked about the 26-year-old leaving the open training session. “It happened almost at the end of practice. I think he felt something but that’s normal.”

Coutinho, who netted a stunning goal to open the scoring against Switzerland, added: “Everybody goes after Neymar. When he’s playing, he gets a lot of fouls. They come strong.

“Of course, our focus is on the collective. One or another player will have a highlight here or there but collective is important. It’s how we think. We will do what we have to do, each and every one of us.”

Pressed to discuss the impact of Neymar possibly missing Brazil’s next match, Coutinho spoke like a player confident the Paris Saint-Germain superstar will be fit to face Costa Rica.

“Neymar is one of the best in the world,” the Barcelona midfielder said. “Playing with him is very important resource. When he plays for us, it’s a huge help. He is a brave man who always faces opponents. Always trying to create. Important for us.”

While Brazil were held in their opener, Serbia edged Costa Rica 1-0 thanks to Alexander Kolarov’s sensational free-kick, setting up a vital game for Tite’s side.

Coutinho anticipates another difficult challenge, though the former Liverpool star is remaining calm.

“It will be very important. We wanted to win the first game. But we ended with a draw. We have another opportunity,” Coutinho added. “I think it will be a great game. We have to be focused. Mentally strong so we can play a good game.

“We have to play a happy game with responsibility because we’re in Brazil jersey. We have to be happy and daring.”