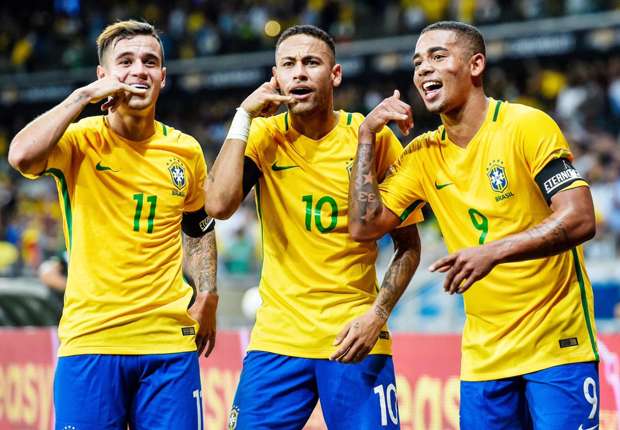 Following their World Cup 2018 disappointment, five-time world champions Brazil are back on the Brasil Global Tour this month as they begin a new cycle ahead of Copa America 2019 and Qater 2022.

A host of new players have been introduced to the post-Russia squads, but a number of Tite’s tried and trusted stars remain to lead a new generation, particularly in front of goal.

Neymar found the net just twice at the World Cup, but has been a consistent goalscorer since Tite took the reins in June 2016. The PSG star still leads the scoring charts under the current coach, with an impressive haul of 14 goals.

Gabriel Jesus answered Brazil’s prayers two years ago when he finally ended their long search for a traditional no.9. He had a disappointing World Cup, personally, but has wasted no time getting back on the scoresheet following his recall in October.

The Man City striker has 11 under Tite after coolly slotting home the opener in a 2-0 win over Saudi Arabia.

Jesus, though, is now in competition with Roberto Firmino for a starting role. Last term saw the Liverpool striker enjoy a career-best season in front of goal for his club, and he has four goals for Tite.

Philippe Coutinho had a long wait to establish himself in international football but has flourished under Tite, becoming a first-team regular and one of Brazil’s most important players. He has scored 9 of his 13 Brazil goals for this coach.

With Paulinho’s international career now seeming to have drawn to a close, however, Tite will be keen to find someone to replace the goalscoring threat from midfield that they have lost.