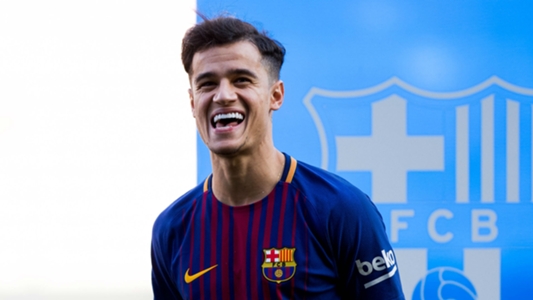 Philippe Coutinho has trained with Barcelona for the first time since completing a €160 million move from Liverpool.

The Brazil international became the Catalan giants’ most expensive acquisition earlier this month but his debut has been delayed by a thigh injury.

Coutinho’s first appearance in a Barca shirt edged closer on Saturday, though, as he turned out for training with his new team-mates.

Pictures shared on the club’s Twitter account showed the likes of Lionel Messi and Gerard Pique applauding the 25-year-old as he was presented to the rest of the squad.

Coutinho’s return comes too late to push him into contention for Barcelona’s next outing.

A win in Andalucia would see Barca move a massive 11 points clear at the summit, with rivals Real Madrid trailing far behind as the season moves into its second half.

The Brazilian, however, could be in line to feature in Thursday’s Copa del Rey clash against Espanyol, with Barca looking to recover a 1-0 deficit from the first leg at Camp Nou.