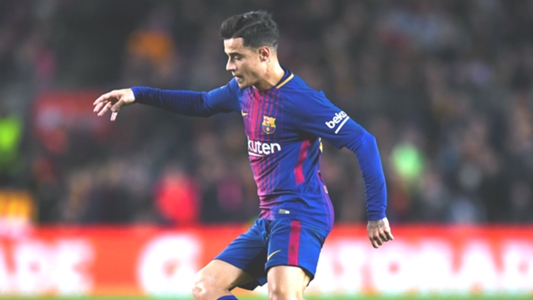 Luis Suarez praised team-mate Philippe Coutinho after the club-record signing made his full debut for Barcelona in their win over Alaves.

After his cameo off the bench in the Copa del Rey on Thursday, Coutinho was in the starting XI as La Liga leaders Barca came from behind to beat Alaves 2-1 at the the Camp Nou.

A reported €160 million arrival from Liverpool, Coutinho experienced a relatively quiet match before coming off for Paco Alcacer in the 66th minute, but goalscorer Suarez defended the Brazilian.

“It’s difficult to debut in the Camp Nou in the league,” Suarez said.

“Philippe was very good. He did very well trying to drive in the game and the team are happy with his contribution.”

But Barca hit back in the second half when Suarez equalised, scoring for the eighth Liga match in succession before Lionel Messi curled in a free-kick with six minutes remaining.

The result ensured Barca remain undefeated and 11 points clear atop the table.

“If you don’t concentrate you don’t win, sometimes looking at the league positions of rival teams does you no good,” said the Uruguay international.

“In the second half we knew what we were playing for and we got the three points.”