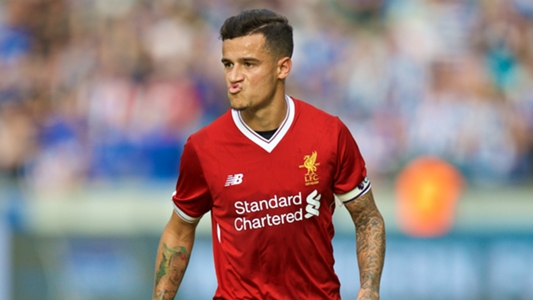 Liverpool demanded €200 million for Philippe Coutinho when Barcelona made a deadline day bid to sign the Brazil forward, according to director Albert Soler.

Barca had made Coutinho one of their top targets after Paris Saint-Germain triggered Neymar’s  €222m release clause to prise the forward away from the Catalan giants.

But Liverpool rejected a series of bids despite Coutinho reportedly making a transfer request in order to force through a move to Camp Nou.

Coutinho has not played for Liverpool all season due to injury and illness, but he came off the bench and scored in Brazil’s World Cup qualifying win over Ecuador on Thursday.

Barcelona subsequently made a late attempt to sign the 25-year-old before the transfer window closed only for Liverpool to request a whopping €200m.

“After weeks of negotiations, yesterday Liverpool asked us for €200m for the player,” Soler told a news conference on Saturday. “We will not put the club at risk.

“We have always worked with the mission not to put at risk the heritage and the viability of the club which is owned by the members.

“The fact that PSG came up with €222m [for Neymar] caused everyone to know that the club had money. When you go to the market and clubs know that you have a lot of money, the requests were exorbitant.”

Barcelona technical director Robert Fernandez claimed Coutinho made a “big effort” to try to engineer a switch to Camp Nou.

“Liverpool were asking for €200m so logically we didn’t accept that,” he said.

“We thank the player, he made a big effort to come here and showed that he wanted to play for us, but the situation ended the way it did and there was nothing else we could do.”

Barcelona were able to land France international Ousmane Dembele from Borussia Dortmund in an initial €105m deal, but Paulinho and Nelson Semedo were the only other major arrivals in an underwhelming transfer window for Ernesto Valverde’s side.

A reported last-minute move for Argentina star Angel Di Maria failed but Fernandez denied the club is disappointed with their business overall, although he accepted the winger’s PSG team-mate Marco Verratti was a target.

“Barcelona have an excellent team and the signings are going to contribute a lot,” Fernandez said. “We have been planning the transfers for a long time. We have chosen high level players that will help us. We have a very good team, the team will help us compete.

“Last night we worked on the possibility of doing some deals and it was not possible. We have to work and look for solutions. We have to think about the future.

“I personally talked to [PSG head coach Unai] Emery and he knows very well that Verratti is the player we wanted.”