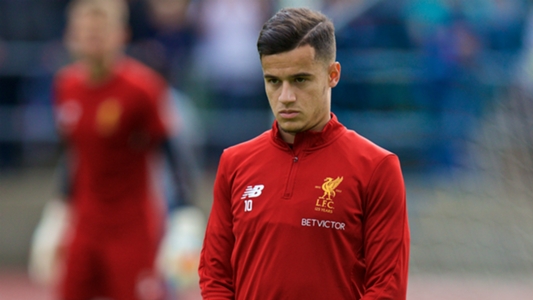 Jurgen Klopp insists his relationship with Philippe Coutinho remains unchanged despite reports of a third bid from Barcelona being rejected by Liverpool.

The Reds are believed to have turned down a latest offer of €130 million for the Brazil international, as the Catalan giants seek a replacement for Neymar, who joined Paris Saint-Germain for €222m earlier this month.

Coutinho is yet to play this season due to a fitness problem and is also unwell, according to Klopp, who remains adamant the player’s attitude is not an issue.

“Phil is now ill, on top of the back injury,” the manager told reporters ahead of Liverpool’s Champions League play-off second leg at home to Hoffenheim.

“One other player had it and was back in training today. But he has had no training for a long time, so we have no idea at the moment. We’ll have to check when he’s back.

“I never give comments on what whoever said or wrote but it’s 100 per cent clear that nothing has changed.

“My English is not good enough to give five different answers to the same question. Nothing has changed.

“You ask if everything is okay between me and him – of course. Absolutely. 100 per cent.”

Klopp: “We know the Anfield atmosphere can and will help us. I hope everyone is ready to fight.”  pic.twitter.com/IAAcdqjkrz
— Liverpool FC (@LFC) August 22, 2017

Liverpool have a 2-1 advantage over Hoffenheim from the first leg in Germany, a stunning Trent Alexander-Arnold free-kick and an own goal by Havard Nordtveit giving Klopp’s men the edge.

But Mark Uth struck with three minutes remaining to give Hoffenheim a lifeline in the tie and Klopp is expecting a tough battle against the Bundesliga side.

“The main difference between the legs is now everyone knows about Hoffenheim’s quality,” he said.

“I knew it, but a lot of people in England didn’t expect it.

“It’s half-time and we have to adjust and change things. The first game was good enough to get a result but the second needs to be better.

“Anfield is a main factor, we all know it. It’s a special place and nothing happens by itself, we have to perform and deliver. But the atmosphere can help and I hope everyone is ready to fight.

“I’d be concerned if people think a weak side is coming and each bad pass gets a moan. But we have a football crowd and they know about the quality. They are ready to fight – and we are too.

“They have a clear plan and I respect what Julian [Nagelsmann] and his team have achieved. We have a plan and need to have a calm approach to the way they play and create half-spaces. They have good enough players and I respect 100 per cent their plan, so we have work to do.”

Klopp was also asked about comments from Hoffenheim winger Kerem Demirbay, who claimed his side play better football than Liverpool.

“It’s not like ice skating where you are judged on the beauty of your performance,” Klopp said. “It’’s about winning. There have been matches where the best team has lost.

“I do like Kerem, he’s an excellent player, but he knows like me that football is not all about beauty.”