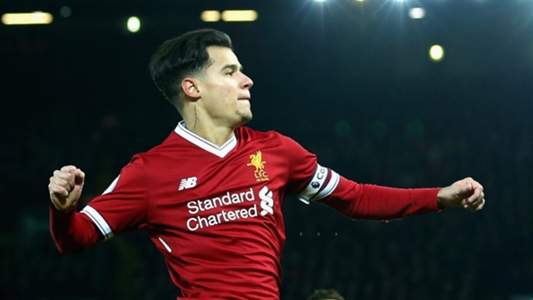 Liverpool manager Jurgen Klopp has played down Philippe Coutinho being given the captain’s armband in the absence of Jordan Henderson and James Milner.

Coutinho continues to be strongly linked with a switch to Barcelona after the Catalan giants failed with an attempted move for the Brazilian in August.

With club captain Henderson out with a hamstring injury and his deputy Milner benched, Coutinho captained Liverpool to a 5-0 demolition of Swansea City on Boxing Day and scored a delightful opening goal.

Coutinho has scored in three consecutive Premier League appearances to take his tally to 12 in all competitions this season, but Klopp played down the importance of the midfielder being given the captaincy, denying it is a hint Liverpool will be able to keep the 25-year-old throughout the January transfer window.

“I don’t want to make the story less romantic but it’s how I said it – when Hendo [Henderson] and Milly [Milner] are not playing I have to look [for a captain],” Klopp told reporters on Friday. “Phil is long-serving, so he is captain.

“I could say that if I give him the captaincy he’ll never leave or he’ll be happier, but that’s not how it works. The armband does different things, you can feel the lift or the pressure.

“It didn’t disturb him, so it’s all good in the moment. It’s a good moment [for Coutinho], I’m not sure if the armband has a big influence, but he has played very well in the last couple of weeks especially.

“It’s just an armband and not more. The job Hendo and Milly do in the dressing room is different. In England when you get the armband everyone tells you what you have to do. It’s important on the pitch, but not in the same way.”

Liverpool Football Club can confirm they have reached an agreement with Southampton for the transfer of Virgil van Dijk.

Liverpool have already confirmed the signing of Virgil van Dijk, the Southampton centre-back set to join on January 1 for a world-record fee for a defender, widely reported to be £75 million.

But Klopp insisted the price tag of the Netherlands international is not a concern, with Van Dijk’s arrival breaking the club-record fee agreed to bring Naby Keita to Anfield from RB Leipzig at the end of the season.

“If you want to sign a player, the last thing I think about is the price,” Klopp added. “Not because I like throwing money around, but because we’re thinking about the player.

“You either accept the price or you do not. It’s a big change in football and we have to adapt to it, that’s how it is. It doesn’t mean all transfers will be in this category but now we have a big transfer for a defensive player.

“It’s not nice, but that’s the market and that’s the world – we have to adapt to it.”