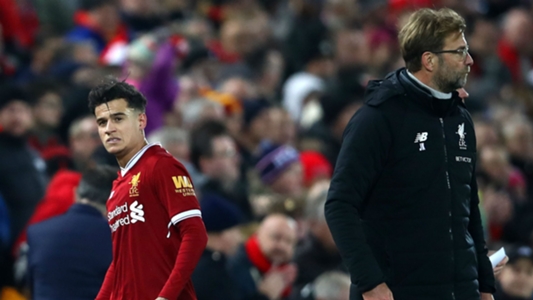 Liverpool manager Jurgen Klopp has said he “couldn’t be less interested in anything in the world” regarding Nike’s apparent leak of Philippe Coutinho’s rumoured transfer to Barcelona.

The Brazilian has been linked with the Catalan giants since the start of the season and was not part of the Reds’ squad for Monday’s 2-1 victory at Burnley due to a minor thigh complaint.

Build-up to that clash was dominated by sportswear manufacturer Nike advertising customisation of Barca’s 2017-18 kit along with the caption: “Philippe Coutinho is ready to light up Camp Nou. Get your 2017-18 FC Barcelona kit with the Magician’s name on it. Act fast – free personalisation only available until 6 January.”

Nike later deleted the page and it remains unclear whether it was a PR blunder or online hacking, but Klopp remains unfazed either way.

“I heard about it. I couldn’t be less interested in anything in the world but someone told me and I thought, ‘Wow, top story’,” Klopp told a media conference.