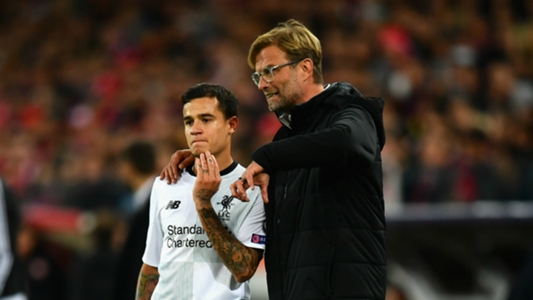 Jurgen Klopp spurned the opportunity to speak about Philippe Coutinho’s future on Thursday for fear of “creating stories” around the Liverpool playmaker.

Rumours linking Coutinho with the Catalan giants have refused to go away since then, although Coutinho has continued to play for Liverpool, scoring seven Premier League goals in 14 appearances this season and deputising as captain.

Leaked Nike promotional material – which was seemingly offering fans the chance to buy a Barca shirt with Coutinho’s name on the back – further fanned the flames but speaking to the media ahead of Friday’s FA Cup clash with Merseyside rivals Everton, Klopp was keeping his cards close to his chest.

He said: “All the things I could say now will only create stories. I have nothing to say. That’s how it is.

“Nothing to say about it. Eighty per cent of the cameras are here for this, it’s a waste of time for them, but that’s it.”

Coutinho will miss the Everton game due to injury, as will Liverpool’s top goalscorer Mohamed Salah, although Klopp said neither player has “big injuries”.

Klopp – yet to win a trophy in his two years at Anfield – is relishing the chance to bring silverware to the club.

“We try every day to improve and be as successful as possible,” the German said. “We try to be more unpredictable, have a better goal threat and better defending. In this competition and the league there are only top teams around and we have to be ready every three days.

“You can dream of winning silverware every day. We know how desperate our supporters are and we are exactly as greedy as they all are. But we have to prove it on the pitch.

“I cannot win the FA Cup in a press conference so we have to be really good in the games. We have to be ready always. It doesn’t help if you build a game up too much but pressure is a fact. You have to use the quality of the players and the squad to be successful at the end. I think we are in a good way but we have to prove it every day.

“We were capable of winning trophies in the first season I was here. In the second season too, but we didn’t do too well in the cup competitions. We want to be as successful as possible so this is a big opportunity.

“To talk about winning something before the first round is disrespectful. We know it’ll be a tough game and we will try everything to get into the next round.”