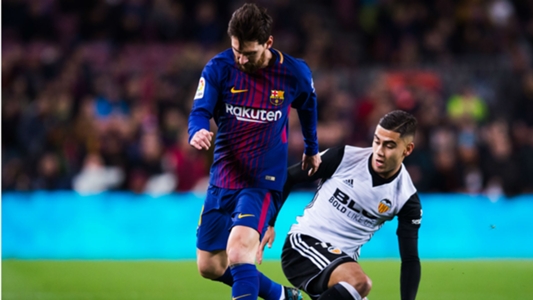 Ernesto Valverde said Lionel Messi must be allowed to breathe amid the weight of expectations on the Barcelona star.

The five-time Ballon d’Or winner clipped a ball to the back post, where Suarez headed home in the 67th minute at Camp Nou .

Speaking about Messi post-match, Barca head coach Valverde told reporters: “When Messi plays the ball, everybody expects many things from him.

“Sometimes it’s too much because we have to let Messi breathe a bit.

“It’s true he is an awesome player as we have said many, many times. It’s a spectacle watching him every day.”

Barca will take a slender lead to the Mestalla and Valverde added: “I wouldn’t say the score is not that bad because I think the score is good because we won the match.

“Winning a match is really difficult and we did. Valencia didn’t score, so we have to think that 0-0 is good for us at Mestalla but we won’t go there looking to draw the match. We will go for trying to win it.”

Club-record signing Philippe Coutinho started the match from the bench before he was introduced approaching the hour-mark.

“It’s true that Coutinho played on the centre because sometimes Messi likes playing on the right side,” Valverde said. “If that happens we have to readjust a bit. Our idea is Coutinho should play on the sides, when Messi plays in the centre, but he can play everywhere.

Meanwhile, Valencia boss Marcelino heaped praise on his team following their gutsy effort away to the La Liga leaders.

“It’s not a good result, but we deserve a lot of credit for how much we competed,” he said. “The tie is very difficult but open, we will fight with all our strength, it seems impossible but we will try to be heroes.

“The Mestalla will help us, the fans saw their team compete without a big part of their team. I think that Barcelona have only failed to score in two away games, hopefully we will be the third.”