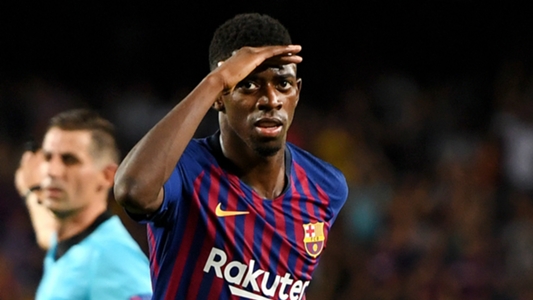 Dembele helped Barcelona to a 4-0 derby defeat of Espanyol on Saturday but following that crushing La Liga victory made headlines again for another disciplinary issue.

The France forward’s timekeeping has been a concern throughout his career, with the 21-year-old reportedly arriving two hours late for Monday’s session.

Valverde was repeatedly asked about Dembele’s discipline during a news conference ahead of Tuesday’s Champions League game at home to Tottenham.

But the coach was unwilling to publicly criticise the youngster and even made light of the matter.

Asked if he could remember such lateness in a player, Valverde joked: “It happened to me!

“I knew you were going to ask about Dembele. It’s true that some things have happened, we will try to solve things internally, and there’s not much more to say about this.

“These are questions about an internal matter, he’s a player who gives us a lot of things in the field, but in the same way that others contribute a lot on the pitch. We all have to follow some guidelines here.

“You win the derby 4-0 and everyone says it’ll be relaxing, it’s sunny outside and you hope nothing crazy happens. This is an internal issue, we will resolve it internally, and I’ve said that four times.”

Valverde: “We’re expecting a tough game against a very strong side, who have qualification for the next stage at stake. We’ll be going for the win.”
#BarçaSpurs pic.twitter.com/Z2t7mkGoXj

Philippe Coutinho’s recent performances have also been questioned but Valverde said he is happy with the Brazil international’s contribution.

“The players’ form goes up and down all season. When Luis Suarez wasn’t scoring the questions were about him non-stop,” Valverde added.

“Philippe is very important for us. He played in the second half the other night [against Espanyol] and is another option for us. We want to support him to give us the best he can, as he is a decisive player.”