ANALYSIS: Despite Neymar missing the trip to the USA and David Luiz, Oscar and Roberto Firmino among the omissions, coach Dunga has a settled side for the tournament

Brazil head to USA next month in search of their ninth Copa America crown.

With captain Neymar sitting out in order to lead the Selecao into August’s Rio games, coach Dunga has selected a young squad for the centenary edition of the Copa America and is desperate to build momentum ahead of a second major tournament on home soil in two years.

One-time Dunga favourites Danilo, David Luiz, Marcelo, Oscar, Fernandinho, Kaka and Roberto Firmino were among those dropped from the group, however, Brazil still look set to arrive in North America with a fairly settled XI.

The high-profile omissions have made headlines around the world but their absence will require only minor tweaks to the first team, which will be finalised on May 29 as the Chevrolet Brasil Global Tour hosts Panama in Denver.

Below, we take a look at the expected line-up that will seek to improve on last year’s disappointing quarter-final exit. 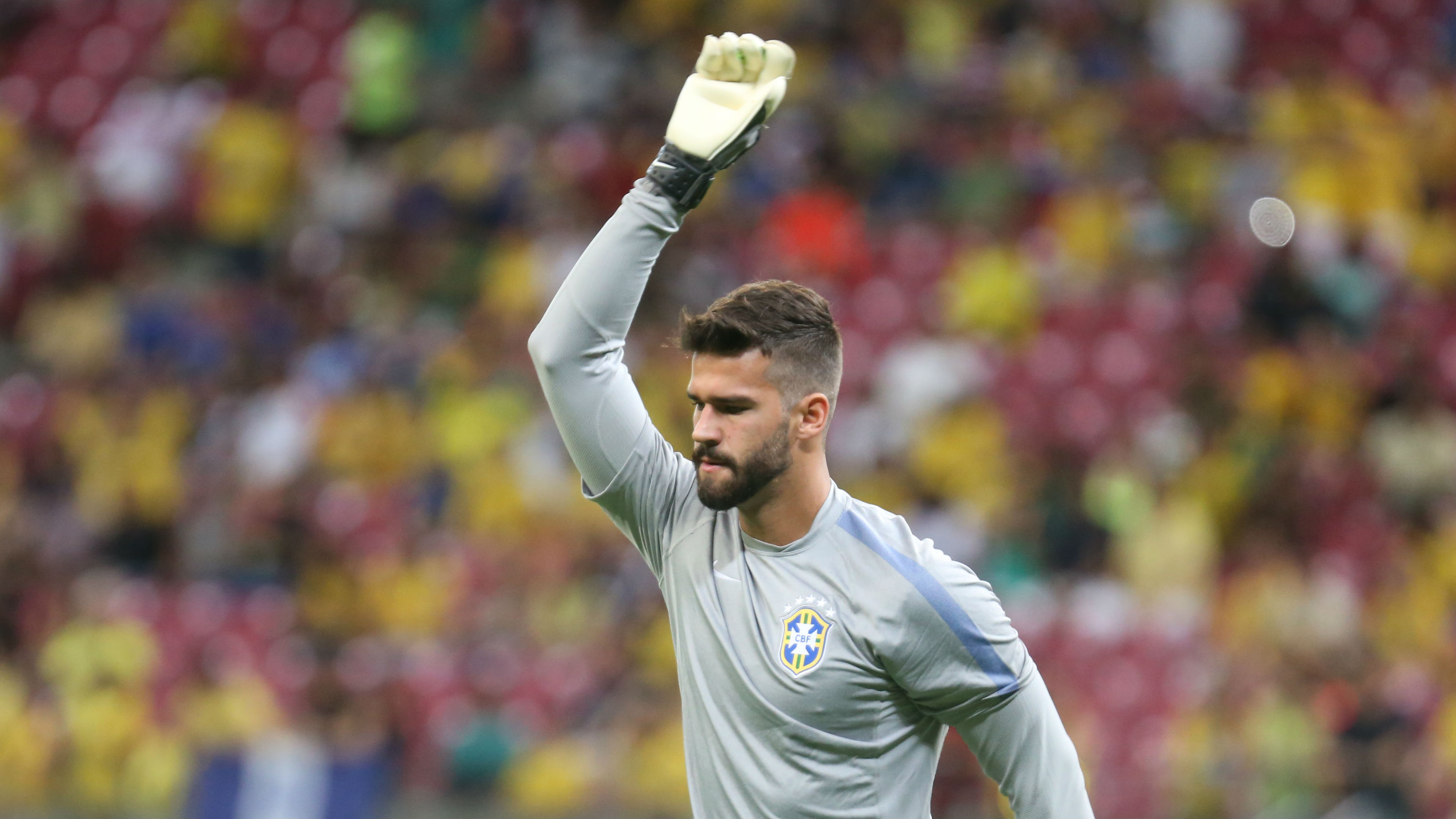 Internacional’s Alisson Becker was handed his chance with the national team in October after Dunga ran out of patience with the previously immovable Jefferson and looks set to remain Brazil’s No.1.

The 23-year-old made his international debut in the 3-1 victory over Venzuela in World Cup qualifying after Jefferson failed to impress his coach in the 2-0 defeat to Chile days previously.

He remained for the next four qualifiers, and despite keeping just one clean sheet in his five caps to date, the reportedly Roma-bound man impressed, particularly in the 2-2 draw with Paraguay last time out.

He will be under pressure from Valencia’s Diego Alves, who has returned to the squad following a serious knee injury. It’s possible Alisson would never have got his chance were Diego Alves fit, but the Inter man has taken it with both hands and is currently the Selecao’s undisputed No.1. 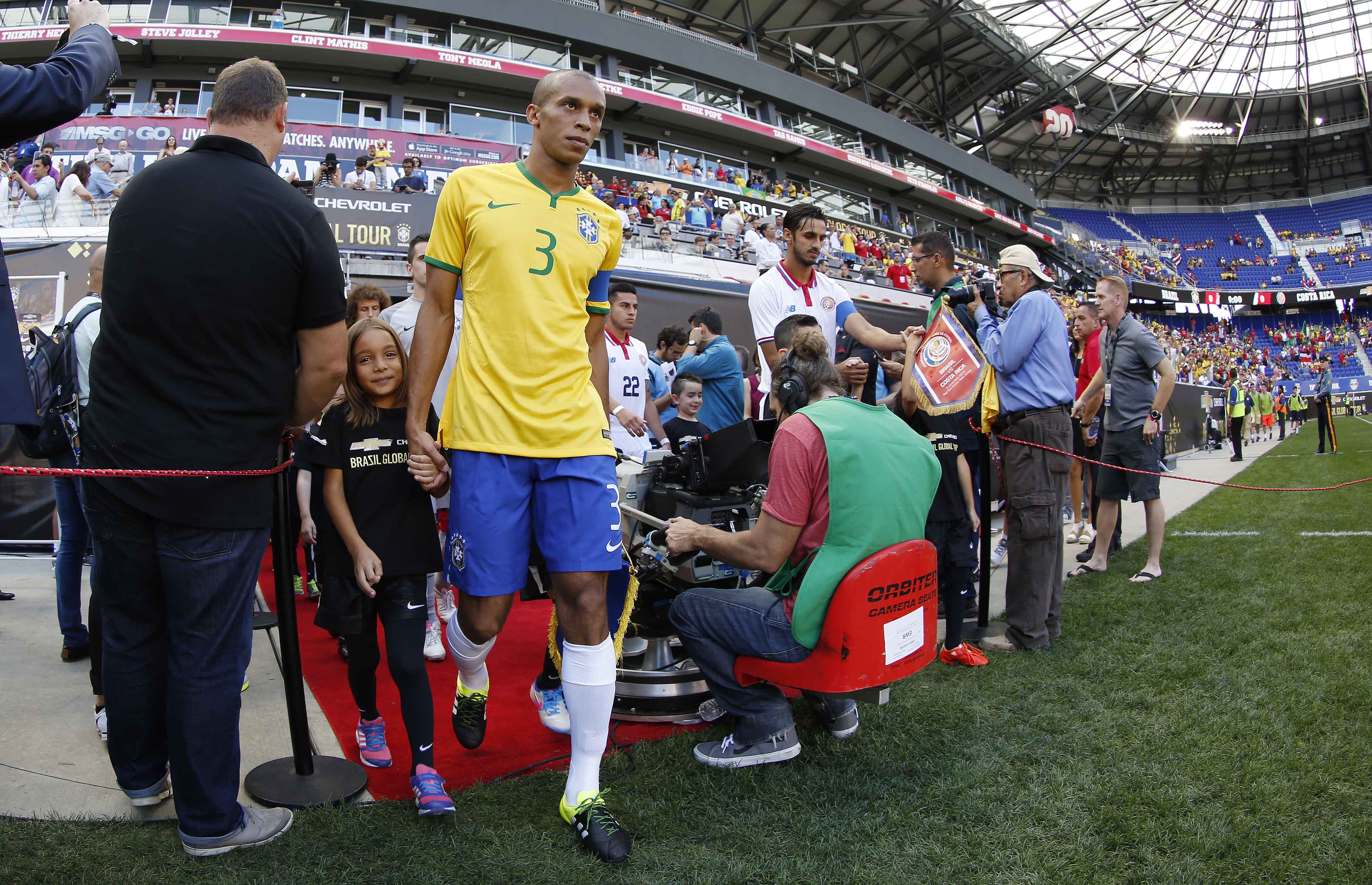 For the back four it will be business as usual, with one exception: David Luiz has been dropped from the squad completely and will be replaced by Shandong Luneng’s Gil in central defence.

David Luiz is the second most-used defender under Dunga (13) and has captained the side twice. However, a red card against Argentina in November was quickly followed by a yellow in March’s qualifier with Uruguay, which earned him a second suspension in two international breaks.

Coupled with his struggles to contain Luis Suarez in the latter, Dunga appears to have lost patience and will turn to former Corinthians’ man Gil. He will be joined my Miranda, who has been a pillar of consistency and played all 22 matches under the current coach. The Inter man should captain the side.

Atletico Madrid’s in-form Filipe Luis will remain at left-back and Barcelona’s Dani Alves is set to retain his place on the right. Olympic prospects Douglas Santos and Fabinho will provide cover for the full-backs. 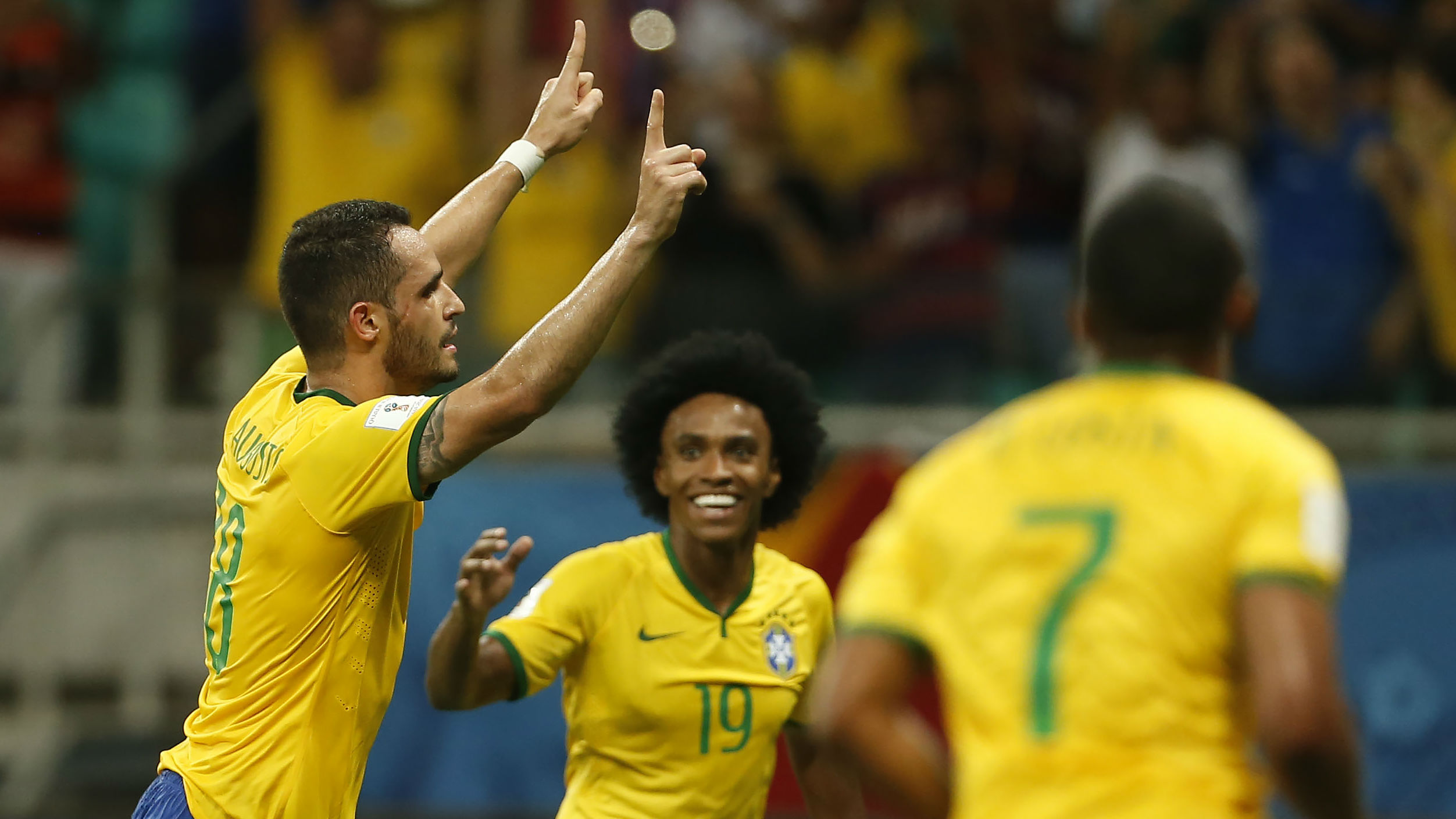 In midfield, Corinthians man Elias should return. He formed a strong partnership with Luiz Gustavo at the base of the midfield prior to an injury and was often preferred over Fernandinho.

The biggest plus in the last two rounds of qualifiers has been the emergence of Elias’ former club-mate Renato Augusto. His decision to go to China was criticised by local media but the smart-passing playmaker has been arguably Brazil’s best player over the last four matches, scoring twice.

He will be charged with filling the creative void left by Neymar. As will Willian, touted by many as being Brazil’s most consistent performer since World Cup 2014. The Chelsea man has grown into a senior role with the team Dunga’s arrival, his tireless work ethic now complemented by a willingness to take responsibility on the ball.

Willian will likely start wide right of an attacking midfield charged with supporting a lone striker, with Bayern Munich’s Douglas Costa on the left. A major tactical shift under the current coach, however, is to have his front men constantly on the move, so they could well interchange throughout games.

Lucas Lima, Rafinha, Coutinho and Casemiro all appear set for a battle to prove themselves worthy of a starting berth. 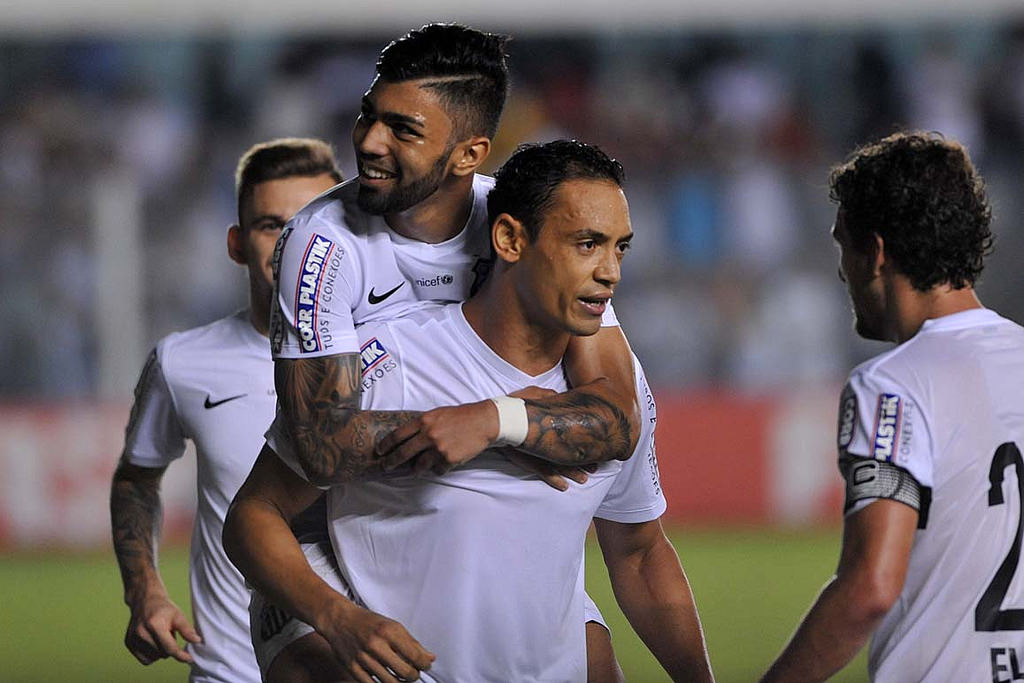 Centre-forward has been an issue ever since World Cup 2014, with local commentators suggesting Brazil are suffering a lack of top talent in the role. Dunga attempted to circumnavigate the issue by introducing a false No.9 but is yet to find anyone to convince him entirely.

The likes of Diego Tardelli, Luiz Adriano, Robinho, Roberto Firmino and Jonas have all come and gone.

Thirty-six-year-old Ricardo Oliveira is enjoying something of an Indian summer in international football and is favourite to start in USA, though he will offer the presence of a more traditional centre forward.

He will face competition for the place from Hulk, another who has been tried but is yet to claim the position as his own.

Most interesting, however, could be Oliveira’s Santos team-mate Gabriel ‘Gabigol’ Barbosa. He is another set to join Neymar at the Rio games. The uncapped 19-year-old is yet to make a major splash for his country, and was even left out of the Under-20 World Cup squad that finished runners-up in New Zealand last year.

He has been in fine form for his club, however, and could well be the future of the Selecao. 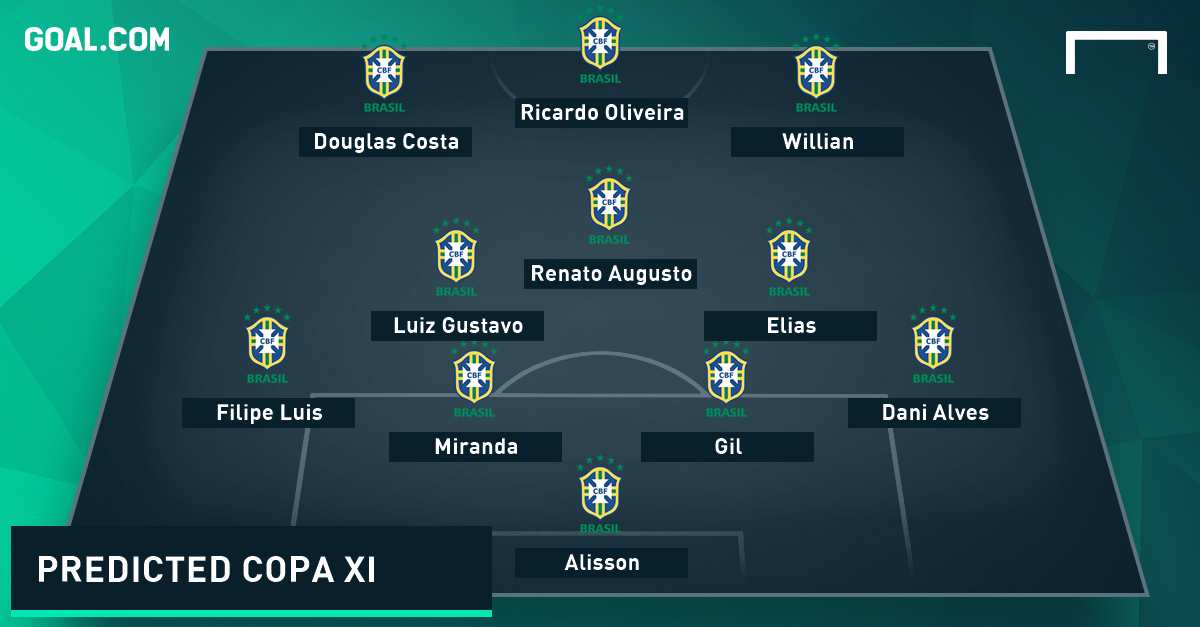 Neymar’s absence means Brazil will be forced to confront their two biggest issues dating back to the previous World Cup: can they do it without Neymar? And who can be Brazil’s No.9?

Ricardo Oliveira spoke this week about sharing the burden in the Barcelona man’s absence, and the decision to save him for the Olympics also means Dunga will not be able to ask him to solve the problem of who can lead the line.

Arriving just one year after last year’s edition, the Copa America Centenario certainly isn’t Brazil’s top priority. However, a good showing in USA would set them in good stead for the Rio Olympics and buy Dunga a little relief from the increased pressure he’s found himself under in recent months.